You Built What?! A Hot-Rod Hauler

An old logging truck is transformed into a sleek street racer 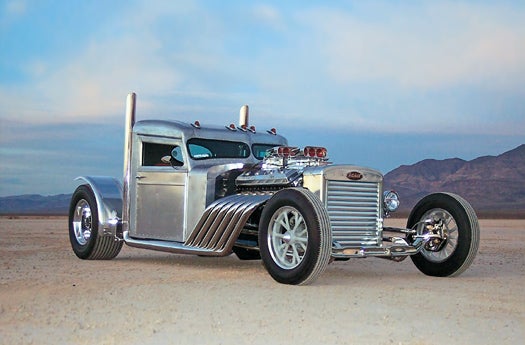 Randy Grubb couldn’t get it off his mind. For years he had been driving past an old logger’s place near his home in rural Oregon, and one of the long-haul trucks in the man’s yard kept catching his attention. In late 2008, Grubb finally stopped for a closer look, and the toothless, cigar-chomping trucker let him rev the engine. He was sold, but he had a big change in mind: He was going to transform it into a hot rod.

The 49-year-old Grubb had built a number of other vehicles out of forgotten engines in his backyard shop. But making a dragster out of this ancient truck—a 1965 Peterbilt Model 351 with a giant 12-cylinder, two-stroke diesel engine—was unlike any of his past jobs. The engine hadn’t been used in a decade, so he found a diesel mechanic to help him tune it up, replaced the original 13-speed transmission with a four-speed automatic normally used in Greyhound buses, installed new fuel lines, and then polished every cubic inch. Next came the body. He shortened the truck’s grill by 10.5 inches, took the front and rear axles from another truck and narrowed them to hot-rod scale, and machined and welded all the connective hardware to complete the transformation.

Grubb refers to the car—dubbed Piss’d Off Pete because it’s a Peterbilt with attitude—as an aluminum sculpture. In fact, the vehicle will most likely soon be in a private collection. But he hardly treats it like a museum piece. As soon as he was finished, he drag-raced it at more than 100 miles
an hour. Off the Scrap Heap

Piss’d Off Pete runs on a 12-cylinder engine Grubb calls “the biggest, baddest diesel ever made.”

Time: 3,000 Hours
Cost: $100,000
DESIGN
Grubb describes the overhaul as “really tedious, laborious, nasty work.” He opted for thinner tires in front, so they wouldn’t dominate the look, and used a wider set at the rear. After chopping the truck cab down to fit the shrunken chassis, he spent about five months grinding steel tubing and other structural pieces. He also added new aluminum plates all over the exterior, and he nickel-plated numerous components at the front and back.

SAFETY
The truck engine had a safety device that could cut air intake to shut down the engine in an emergency, but Grubb didn’t like the way it looked, so he covered the blowers that help force air into the engine with “butterflies” common to the 1970s dragster world. These red, circular hinged covers give Pete a demonic look, and if the motor begins running on its own oil—a danger in racing a car with this type of diesel engine, where it keeps on revving until it blows—he can close them up and strangle the engine.

EFFICIENCY
Piss’d Off Pete wouldn’t pass emissions tests, but the massive V12 gets an estimated 15 miles per gallon—green for a hot rod, at least. The reason: Grubb says the engine was designed to pull 150,000-pound loads, but his car weighs in at a mere 8,500 pounds. “The motor doesn’t even know there’s anything attached to it,” he says. Piss’d Off Pete barely has to work. The car’s future is as a display piece, but if set loose, Grubb says, “it could cruise down the freeway at 70 miles an hour at only 1,500 rpm.”