A graywater system uses shower and sink runoff to flush the toilets. Plus: four more ways to save water at home 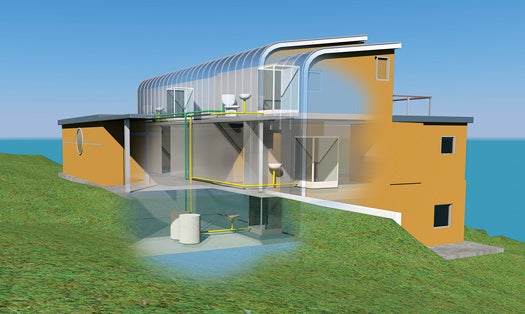 Just because residential water is cheap and plentiful here in upstate New York is no reason to waste it, and the average household does plenty of wasting: A single flush consumes three to seven gallons of water. Inefficient toilets and long showers are two of the biggest water wasters, together accounting for more than 40 percent of the 350 gallons of water used daily in a typical American home. But my eco-home is anything but typical—its graywater recycling system can save at least 110 gallons a day.

Graywater refers to the runoff from sinks, showers and washing machines (as opposed to blackwater, which contains solid waste). With some basic plumbing and a storage tank, it’s easy to recycle that water to flush my house’s four toilets. By using the water twice, I’ll also save wear on my septic system.

The setup is pretty straightforward. Water from the bathroom sinks and showers goes through a chlorination filter and into a holding tank, where it can be pumped to the toilets. (I’m skipping the washing machine and kitchen sinks, since they require additional filtering and I’ll recycle plenty of water from the bathrooms alone.) It’s not difficult to DIY, but the central challenge is monitoring and controlling the level of chlorine in the storage tank. Too little, and you’ll get bacteria in the tank. Too much, and it will kill the bacteria your septic system needs. So I’m using a new setup from a company called Blue Eco Systems that funnels water through a chlorinator to carefully control how much chlorine goes in. Carbon filters on the overflow and bypass lines prevent chlorine from getting back into the septic tank and the toilets, lest my bathroom smell like a swimming pool.

The system uses a pair of 25-gallon tanks—enough for my family of four—but I can easily expand it with more tanks if we have more kids or the in-laws move in. 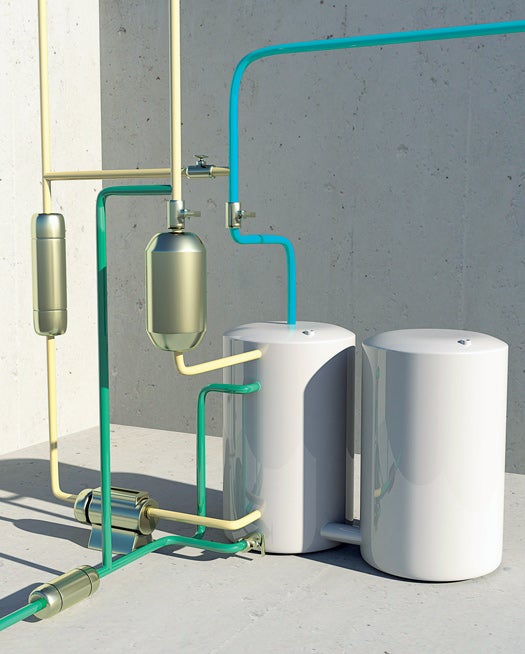 How It Works: Green Dream

How the Green Dream’s Plumbing Works

Fresh water in: If there’s not enough graywater in the tanks for a flush, the system pulls in regular street water.

Graywater in: Water coming from bathroom sinks and showers

Carbon filters: Remove the chlorine from the water before it reaches your toilet or septic system so it doesn’t kill the bacteria the septic system needs

Chlorinator: Cleans the graywater to prevent bacterial growth in the tank

Overflow: Carries extra water out to the septic system so the tank doesn’t overflow

Pump: Sends the water from the tank up to the
toilet tanks

Flow sensor:If the system detects no water flow in 22 hours, it dumps the contents of the tank so it doesn’t sit long enough for any remaining bacteria to grow.

Four More Ways to Save Water at Home

Sprinkler Shutoff
A broken sprinkler can waste 100 gallons in 10 minutes when the irrigation system kicks on in the early-morning hours. This automatic shutoff valve prevents waste by holding water in the irrigation tubes if the sprinkler head is broken, saving about 65 percent more water than a system without one. From $4; [dry-planet.com](http://www.coservco.us/>conservco.us Shower Stop Sign The first time you shower with the Waterpebble in the tub, it tracks the time from when the water starts and stops flowing. On subsequent showers, this opaque plastic dome flashes red after that amount of time and speeds up to that mark by 5 percent over three showers, subtly helping you shorten your scrub time. $12;