You Built What?! A Real Iron Man Suit 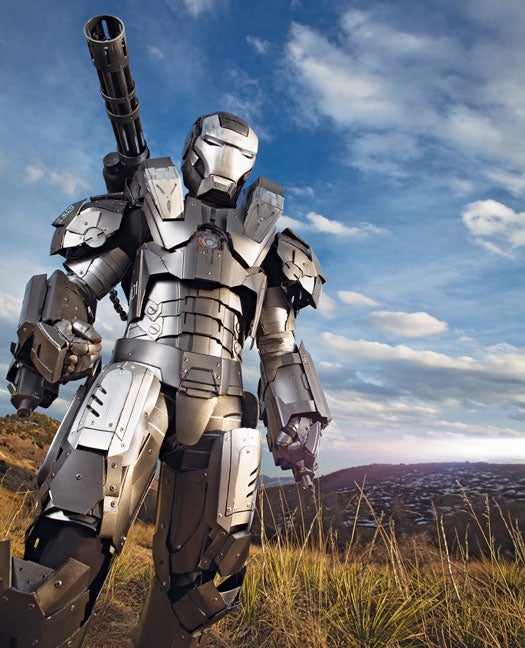 Anthony Le, 25, has been a fan of Iron Man since he was a kid, but when he heard that the comic-book superhero was hitting the big screen in 2008, he was inspired to build his own Iron Man suit. That version was more of a costume, but his new one, finished just in time for the movie’s sequel, edges much closer to the real thing. With its dent-proof exterior, motorized faceplate and spinning mock Gatling gun, his take on the movie’s War Machine suit could easily frighten a supervillain.

Le, a fitness consultant, studied some concept sketches of the suit posted on the Internet. He used thin, high-impact urethane for the armor, cutting it into plates and joining them with some 1,500 rivets and washers. He sculpted a clay helmet mold and then used a liquid resin mix to create the final product. But that was just cosmetic work. He also added a small servo motor that opens the faceplate, as in the movie, and built a gun out of pipes and a motor. LEDs in the eyes and chest-plate further add to the illusion.

Le plans to wear the suit to the movie and already has quite a following, especially at sci-fi conventions. “I’m kind of hard to miss,” he says. 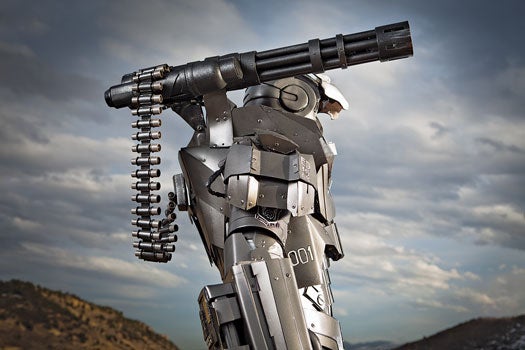 Le wore one of his suits to the Children’s Hospital in Aurora, Colorado, to cheer up the kids, and the staff was so pleased that they made him his own ID card. The name listed? Iron Man.

WEAPONRY
Le built a replica of the machine gun on the suit’s shoulder out of PVC pipes and other materials. He added a small motor and belt drive to make the cylindrical gun spin like the real thing. To activate it, he presses a button in the palm of the suit’s glove. He says the gun could also be converted into a paintball shooter.

POWER
Le built an LED-based replica of Iron Man alter ego Tony Stark’s arc reactor for the chest, but unlike the movie version, it doesn’t actually power the suit. Instead, all the LEDs and the motors that drive the gun and the faceplate have their own batteries hidden within the suit’s large frame.

CONTROLS
Inside the chestplate, Le added a hands-free button that activates the helmet. When the faceplate is open, he just stands up and points his arm forward, causing his chest to press against the button, triggering the servo motors in the helmet to close the mask. This, in turn, switches on the red LEDs set inside the eye openings, which are large enough for him to also see out of. To open the mask up again, he presses another button.

BACKUP
Le says he focused on the War Machine suit, donned by Stark’s buddy Jim Rhodes in Iron Man 2, in part because “it just looks more hardcore.” But he also built a new-and-improved replica of the suit that Iron Man himself wears in the film, the Mark VI. That version also has the LEDs and motorized faceplate but, alas, no cannon.

Projects
culture
how tos
iron man
June 2010
you built what