Invention Awards: A Gaming Device That Lets You Feel the Sound 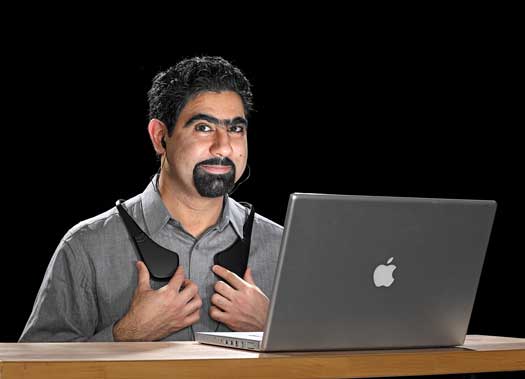 Check out today’s featured Invention Award winner, the KOR-fx, a device that makes you feel physically immersed in a videogame.

Shahriar S. Afshar has spent the past five years perfecting a device that pumps sound vibrations directly to your ribcage, intensifying videogame and movie experiences. But when we meet near his office, the 38-year-old first spends an hour talking physics. “The Higgs boson, the so-called God particle?” he says excitedly. “It does not exist!”

Turns out he’s not just rambling. Many complicated diagrams later, he reveals that the KOR-fx (short for Kinetic Omnidirectional Resonance effect) is an indirect by-product of his years of work in physics. In 2005 he was living in campus housing at Rowan University, where he is a visiting professor, when he found himself unable to work because of the wall-shaking bass of the students’ videogames. An inventor since his childhood in Iran, he decided to design a solution that would provide gamers with all the vibrating bass they could handle, while not disturbing anyone who isn’t playing.

The device translates the audio signal from a game or movie into vibrations that the wearer can feel throughout his body.

Then he lets me try the KOR-fx. It’s about the size of a pair of headphones and sits over the shoulders like a backpack. Two transducers, which translate sound into vibrations, press gently into my chest and connect through a small box to any gaming console, PC or music player to extract the bass and other elements from the audio signal. The bass is in stereo, so you can feel the direction sounds are coming from.
We test out music, movies and games. As I listen to the sound through earphones, the T. rex’s footsteps in Jurassic Park reverberate in my chest; in the game Halo 3, I can feel that I’m taking sniper fire from my right side. Overall it’s like acclimating to the new cinematic 3-D: First it wows you, then it just works on your senses, pulling you deeper into the story.

Afshar says future versions of KOR-fx will create an even more immersive experience. The effect wasn’t ready for my test, but he says he can generate frequencies of vibration that act on the visceral nerve system, tricking the user’s brain into believing that his body is experiencing a range of phenomena. “We can induce the sensation of rain, wind, weight shift, even G-forces,” he says. His company, Immerz, is in talks with several studios to add these effects to films.
For now, though, the invention will be a gaming device. Afshar plans to sell it for $190 but expects that the price won’t matter once people see the results. “We have gamers who have been using it, and their kill ratios have been increasing dramatically,” he says. “They don’t die unnecessarily.”