How to not die in a blizzard

The one simple trick? Stay inside. 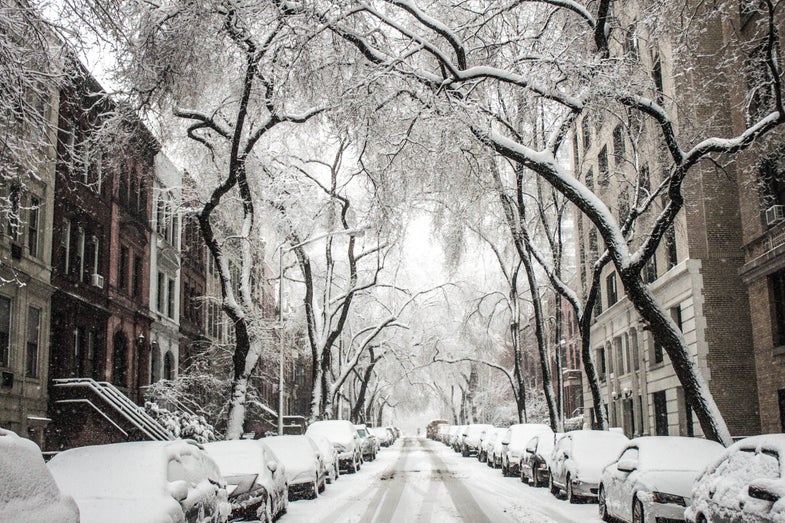 There’s something about the deep, soft snow that makes the whole world feel quiet. Technically that something is all the tiny holes in snow drifts that absorb sound, but poetically it’s that everyone comes to a standstill. Schools close, offices empty, and we all huddle inside to watch the flakes float down.

Well…not quite all of us. Because inevitably, some people leave their homes. And this is the single biggest mistake you can make during a blizzard. The best way not to die in a snowstorm is to stay inside. In 2015, 20 people died in winter weather—and sure, that’s not very many. Far more people die in their bathtubs (453 people, in case you were wondering). But dying in a snowstorm is totally preventable: just stay inside. Here’s all the ways you’re likely to die in a blizzard (oh yeah, and also how to avoid them):

A heart attack while shoveling snow

Let’s get this one out of the way first. There are always a handful of people who try to shovel snow and die from heart attacks, often because they aren’t used to the exertion. It’s surprisingly hard work (or maybe not that surprising, if you’ve ever actually done it), especially if the snow is wet.

How to avoid it: Get a strapping young lad (or lady) to shovel for you! Maybe offer to pay them—or just tell them that if you try to do it yourself and die of a heart attack it will be their fault. But if you’re getting up there in years or have any sort of heart condition, shoveling yourself is a big no-no.

Freezing to death outside

Some people are lucky and get frozen outside but miraculously recover. In 1994 a toddler in Saskatchewan spent hours outside in sub-zero weather, was found with no pulse, and yet somehow thawed out. She only lost part of one leg. In 1920, a young girl named Hazel Miner set off from school in a blizzard along with her two younger siblings in their horse-drawn sleigh, promptly getting lost (because they were children trying to find their way in whiteout conditions, geez). When they inevitably got stuck, Hazel wrapped them all in blankets, breaking up the snow as it crusted around them, and used her body heat to try to keep them warm. She died during the night, but her brother and sister survived.

You are unlikely to be among these lucky few. They are the exceptions to the rule, which is that people cannot maintain normal body temperatures in extreme cold—especially if they stop moving—and they will freeze to death.

And as an extra note: don’t drink alcohol if you’re stuck in the snow. It seems like it has a warming effect, but what you’re feeling is actually the alcohol’s vasodilating effect—it opens up the blood vessels in your extremities, which makes them feel temporarily warmer. The trouble is that all that extra blood close to the surface of your skin makes you lose body heat faster, so you end up colder than you would have been otherwise.

How to avoid it: Stop trying to go places in the cold. If you absolutely must go somewhere, make sure to dress for the weather. That means actual snow boots, a coat that will block the wind, plus a hat and gloves. Everyone who gets stuck outside in sneakers and a sweatshirt thought they were only going to be out there for a few minutes or told themselves they would be in the car the whole time—that’s how you die. Speaking of which…

Freezing to death in your car

Your car seems like a safe haven in a blizzard. You’re driving along the highway blasting the heat and singing along to the radio, enjoying how cozy you are surrounded by snowflakes. But uh oh, you can’t really see the highway ahead, and your tires don’t seem to be gripping the road properly, so you better pull over until the conditions clear. You can even keep your car running and the heat on, so you’ll be fine!

This is how people get trapped by the side of the road. It’s easy to not realize how quickly snow is piling up outside. And as those enormous snow plows go by, they’re sweeping even more of it towards you. Pretty soon you can’t leave, and then you run out of gas, and before you know it you don’t have heat anymore. There’s no one going by on the road and thus no one to find you. You’re getting colder and sleepier and oops…now you’re dead.

How to avoid it: Don’t drive! If you must, dress warmly in case you get stuck, and bring water with you. Dehydration makes it easier to get hypothermia, and you probably won’t want to quench your thirst with freezing-cold snow. If you end up stuck by the side of the road, use your gas strategically to keep the car just warm enough rather than blasting it. Cars aren’t very insulated, so you’ll end up losing quite a bit of heat to the environment. You can also do little exercises in the car to keep blood flowing. And keep your hazard lights on—passing emergency vehicles may not realize there’s a person inside the car, but blinking lights might get their attention, or at least help them not to hit you.

And also: don’t leave your car. As many problems as you can have stuck inside, it’s much worse outside—and it’s easy to get lost in a snowstorm. People have a tendency to walk in circles when there’s no sun to guide them, simply because the errors in one direction eventually add up such that you walk slightly to the right or to the left until you get back to where you started. Though to be honest, you’ll probably freeze to death first.

Suffocating in your car

On the topic of getting stranded in your car, it’s pretty easy to suffocate in there. People sit in their cars inside snowdrifts with the engine running to stay warm, not realizing that their tailpipe has clogged up. That forces the carbon monoxide in the exhaust back into the car, where it can quickly fill the relatively small space. Carbon monoxide bonds to hemoglobin in your blood in the spot where oxygen normally hitches a ride, but unlike oxygen the carbon monoxide molecule doesn’t get released. As you breath in more carbon monoxide, fewer of your hemoglobin proteins can bind with oxygen and you slowly suffocate. The only consolation is that you’ll pass out from lack of oxygen before you realize you’re suffocating, so at least it’s not painful. On the other hand, carbon monoxide is colorless and odorless, which makes it difficult to know what’s happening. If you find yourself getting sleepy while trapped in the car, it’s probably carbon monoxide poisoning.

How to avoid it: If you’re stuck in your car, get out to check that the tailpipe is clear every time you want to turn the engine back on. That’s really all you can do. Just don’t go wandering off in circles while you’re out there.

It doesn’t take much snow to make roads slippery, and during that period where the snow hasn’t gotten bad enough to force most people inside, it’s easy to get in accidents. Your brakes suddenly don’t work that well, and making turns becomes much harder. Or maybe you’re a great driver, but someone else tries to brake at a red light and hits a patch of ice. Whatever the reason, the lowered friction on roads increases your likelihood of getting in a car crash. Some of them will be fender benders, but some will be deadly.

How to avoid it: Don’t get into your car in a snowstorm. Or, if you’re really determined to drive, do everything more slowly. Brake slower, accelerate slower, turn slower. It can take ten times as long to come to a stop in the snow as it does on a dry road, and antilock brakes can only do so much. Most people think they’re above average drivers thanks to the Dunning-Kruger effect, when in reality most of you are just average. So stop overestimating your driving skills.

Losing control of your own car

Even if there’s no one else on the road, you can spin out all on your own. When you hit a patch of ice, the car starts to slide in whatever direction it was already going. Suddenly the driver’s wheel doesn’t seem to have an effect and you’re careening off the road, especially if your wheels weren’t facing straight to begin with. You’re probably panicking. And if you’re going fast, running into a tree or a highway barrier could be fatal.

How to avoid it: Hitting ice often makes people turn the wheel wildly and brake hard in an attempt to regain control. The best course of action is actually to steer into the turn and take your foot off of the pedals. Your car will slow down and straighten out, at which point you can start driving again. To avoid getting stuck on a hill, try to go up at a slow pace without stopping. If you have to pump the gas you’ll end up spinning your wheels, and you’ll have even less traction than before. So basically, just try to move at a reasonable, constant rate in as straight a line as possible.

In 2015 there were 111 deaths from falling on snow and ice. It’s all fine and cute if you fall while you’re ice skating with your date, but it’s not so lighthearted when you slam your head into solid ice. Brain injuries of any kind are serious, so go get yourself checked out if you take a fall. This is especially true if you lose consciousness at all, or if you have pain in your head on the opposite side from where you hit it. If you slam into something hard enough, your brain effectively bounces off the other side of your cranium, which can cause serious damage and internal bleeding that can cause you to die suddenly hours later.

How to avoid it: Walk like a penguin. Short shuffles help you to move without too much momentum, and keep your feet close to the ground so they don’t slide out from under you. And remember to keep your hands out of your pockets—it’s much better to break your fall with your hands and arms than with your face.