But can it survive a land mine explosion? 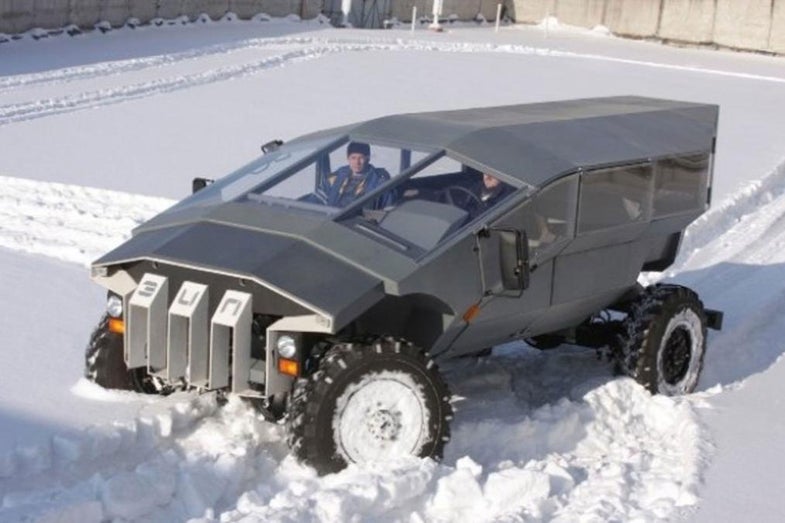 It’s hard out there for an armored car. Overshadowed by tanks, but less friendly than a minivan, armored cars have the unenviable duty of carrying troops to the front lines of a battle quickly and safely, and hopefully without getting destroyed by a roadside bomb. Designed by Russian auto giant ZIL, a new, unnamed armored car concept tackles that challenge with a body straight out of science fiction.

First spotted at Auto Express, the new concept resembles nothing so much as an angry insect, with a large grille and sloping front faceplate. Pictures of the inside show ten seats, including the driver, which is more than double that of the Humvee favored by the U.S. military, and puts this concept closer to the capacity of modern, heavier Mine-Resistant Ambush Protected vehicles, or MRAPs. The ZIL vehicle’s sloped undercarriage at least superficially resembles the mine-deflecting angles built into MRAPs, though the exposed driveshaft undermines that protection.

Founded just before the Russian Revolution, ZIL produced tractors and work trucks throughout the Soviet era, and later added luxury vehicles and long-haul busses to their repertoire. Reportedly, the Russian Army commissioned the concept vehicle. If so, and if the vehicle proves affordable and durable enough, expect future wars on Russia’s border to get a little bit of sci-fi sheen.