As the Northeast and South brace for yet another day of record snow fall, thousands of Americans are struggling with... 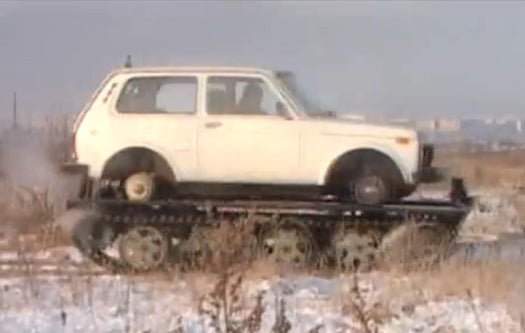 As the Northeast and South brace for yet another day of record snow fall, thousands of Americans are struggling with ways to deal with treacherous road conditions. Thankfully, some intrepid Russian DIYers have a plan: convert your car to use tank treads.

As shown in the video below, the system can convert any car, from an SUV to a Lada, into a tracked monster. This conversion comes from the city of Chelyabinsk, which once hosted so many T-34 manufacturing plants that the city got the nickname “Tankograd”. And, since a disaster in 1957 at the nearby Mayak nuclear reprocessing plant turned Chelyabinsk into one of the world’s most contaminated cities, these tank treads also come in handy for running over any roving mobs of radiation mutants one might encounter.

Anyway, check out the video, and then maybe place an order for a set of treads to help you navigate the snow drifts obstructing traffic at DuPont Circle.