The AI of the Tigr 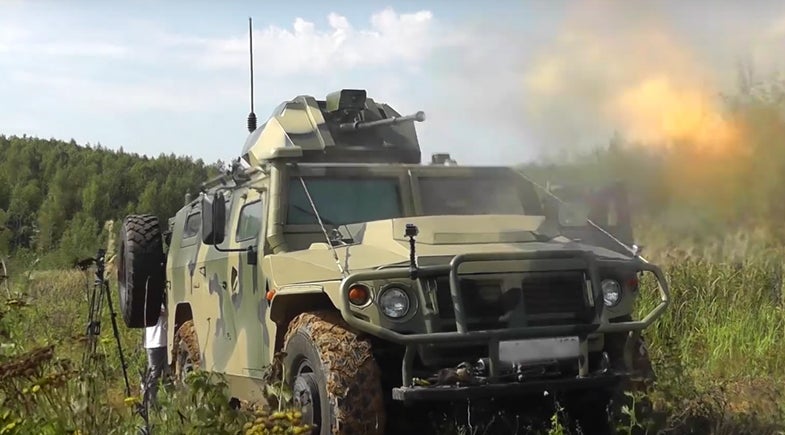 In the background, wearing a white t-shirt, is a camera man. That's not a standard feature. Screenshot by author, from YouTube
SHARE

Russia’s Tigr is a decade-old armored car. Seating 10 soldiers inside with gear, the Tigr’s primary missions is to get Russian forces safely to where they need to be, across rough terrain. Since it was made to be filled with people, the newest design takes the Tigr in an odd direction. Instead of a human-driven troop carrier, the latest Tigr model is a remotely controlled gun-firing robot.

Tigr is made by VPK LLC, a company that works closely with the Russian government.

“A new product will be rolled off the line that we haven’t mentioned before – a special purpose vehicle Tigr equipped with a combat module and a 30-mm automatic gun,” said VPK’s CEO Aleksandr Krasovitsky in an interview with TASS, a Russian government news agency. TASS further claims that “not only is this armored vehicle capable of moving and firing on an operator’s commands, it can also identify and track targets on its own.”

Remote controlled, armed robots are not terrible new. The United States fields many armed unmanned flying machines (drones, as we know them), it’s also put guns on other robots, and made sure humans are present to press the trigger. Iraq itself appears to be considered the Alrobot, a new, remotely controlled armed machine.

The Tigr, too, fits into this general category, with the machine tracking the targets, but a human ultimately responsible for making the decision to fire. That’s not too dissimilar from how the Pentagon envisions autonomous war robots, with a human always “in the loop” and responsible for making any lethal decisions.

If the remote-controlled Tigr is deployed in Russia’s many proxy wars, from Syria to Ukraine, we’ll see if that human control of the system holds, or if the next step for machines like this, no matter which country uses them, is to hand the deadly decisions over to the robots.

Watch a clip of the Tigr, performing both manned and unmanned functions, below: