The icy island is having a meltdown. 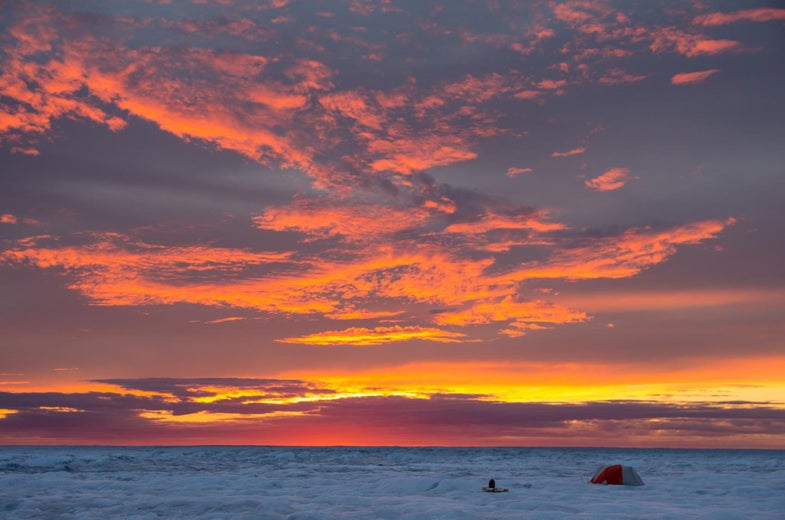 Greenland may be on the way to living up to its name—and that’s not a good thing.

For 18 million years, the vast expanses of Earth’s largest island (no, Australia doesn’t count) have been covered by the aptly-named Greenland Ice Sheet, a colossal mass over two kilometers thick that covers 1.7 million square kilometers. But since 1990, scientists have noticed that the ice—which usually melts in the summer and refreezes in colder months—has been melting faster and earlier in the year. In a recent study published in Science Advances, researchers at the University of Bristol have found an unexpected source of this increased melt: sunlight.

That’s right, spending more time in the summer sun isn’t just giving Greenland bad sunburn. The ice sheet is losing mass as it melts, and a lot of it: Just one percent less cloud cover can cause 27 gigatons of Greenland’s ice sheet to melt, and it’s headed into the ocean. (For reference, that’s equivalent to the USA’s annual domestic water supply.)

The team of researchers looked to the sky to better understand the cause of the accelerated melting. They combined observations from weather satellites with a complex climate model, which used factors like temperature, humidity, and sea ice to describe changes in cloud cover.

The satellites showed that summer cloud cover area has decreased by more than 84 percent between 1982 and 2009, and the models estimate that cloud cover has decreased consistently by one percent per year since 1995. It’s not a prediction, says J. L. Bamber, the senior author of the study and a professor at the University of Bristol—it’s more like a historical forecast.

Knowing that summer cloud cover has been decreasing for decades, the researchers compared these changes to the amount of melting ice. There was a connection, and in particular, they found that the increase in summer melt over the past two decades was accompanied by an increase in shortwave solar radiation reaching Earth as a result of low cloud cover. This abundance of solar radiation provides more energy so that the ice can melt more quickly.

The traditional explanation for the ice melt had been temperature: the world is getting warmer. Temperature still probably plays a role, Bamber says, but it’s not the only character in this icy story.

“There have been lots of studies showing that temperatures have been increasing in the Arctic,” Bamber says. “Science suggested that was the dominant factor in ice melt. But we found that increased sunlight is dominant.” He adds that sunlight causes about two-thirds of the ice melt, while temperature increases are responsible for the other third.

The researchers also wanted to know why the cloud cover was decreasing. They found that large-scale changes in weather—particularly the disruption of oscillating high and low pressures systems—were associated with decreased cloud cover. The prevalence of these high pressure systems (a beautiful day, to someone who’s not a meteorologist) would in turn increase the amount of solar radiation reaching the island’s icy surface and accelerate the ice melt.

“It’s a very interesting finding,” says Ralf Bennartz, a professor at Vanderbilt University who was not involved in the study. “The important thing in my view is that those clouds don’t show up and dissipate out of nowhere. They are embedded in larger scale changes in atmospheric circulation.”

But what does this mean for the rest of the world? Well, when the ice melts, it has to go somewhere; it flows into the ocean. Greenland is currently the largest single source of added ocean water (contributing 4,000 gigatons of melted ice since 1995), Bamber says, and it’s got a lot of ice left—enough to increase the global sea level by more than 20 feet.

“Even a small change in the volume of ice in Greenland is going to have an impact on sea level,” Bamber says.

Bennartz thinks that the important research question now is how these patterns are going to change as the weather continues to shift. The study notes that the changing weather patterns are related to global warming, and if the current trends are uninterrupted, we could see the ice melt continue to boost sea levels.

“Will it amplify effects of warming?” Bennartz asks. “Will this stop at some point or will it go on until we reach a point when it’s cloud-free Greenland?” Based on the results of this study, that would cause a large surface melt.

It’s difficult to say whether these changes in cloud cover can be mitigated, Bamber says. For now, let’s hope that cloudier days are ahead for Greenland (so that we don’t all end up underwater).