Greenland is melting much faster than we thought

It’s not surprising, but that doesn’t mean it's not devastating. 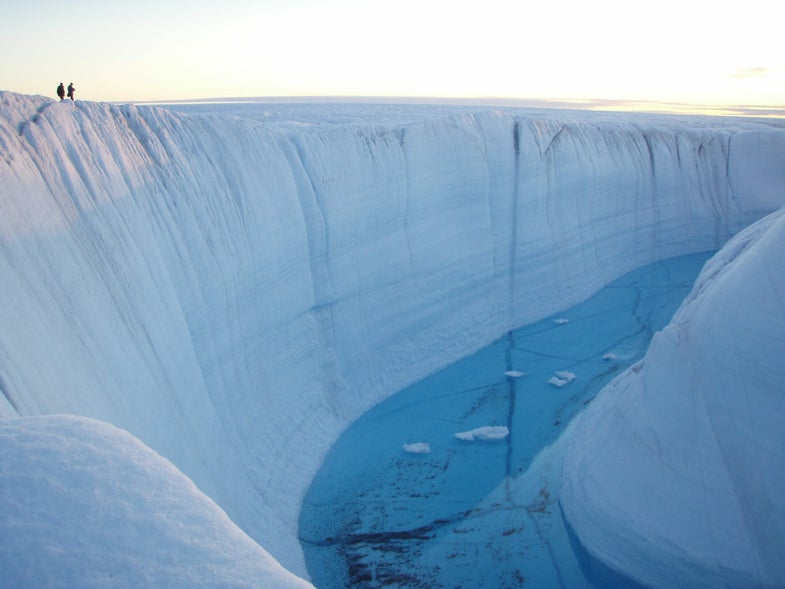 Greenland is losing its cool. That’s not much of a surprise—its mile-thick sheet of ice was not made for this epoch of climate change. But that cool is getting shredded faster than we think.

According to new findings published Wednesday in Nature, climate change has accelerated the melting of Greenland’s ice sheet to unparalleled levels, unseen in at least 350 years and likely in the past 7,800. The rate of melt and the resulting runoff falling into the ocean (and adding to a rising sea level) is speeding up over time, thanks to a motley of factors acting as a feedback loop.

It’s a startling discovery. In 2012, Greenland experienced one of its hottest summers on record, with about 97 percent of its ice sheet turning into slush and generating enough melted water runoff that global sea levels rose by over a millimeter. That was extreme, but the new study suggests it may have just been a glimpse of what’s to come.

About 2.5 times as big as Texas, Greenland is home to the second largest ice sheet on the planet after Antarctica. “Altogether, it has enough ice to raise global sea level by 23 feet if it were to fully melt,” says Luke Trusel, a glaciologist at Rowan University and the lead author of the new study. “While we don’t think this will happen any time soon, understanding how it is changing is critical for assessing risk to our coastal communities and livelihoods. Roughly 40 to 50 percent of the U.S. population lives near a coast, so while we might not think about Greenland very much, what happens there matters greatly.” All of that water can also disrupt global ocean circulation that stabilizes continental climates and delivers freshwater and nutrients to marine ecosystems.

“Today, we know Greenland is the leading source of new water added to the ocean every year,” says Trusel. “But to better understand how fast its ice will melt in the future, we need a fuller picture of how it’s changed so far.”

So Trusel and his colleagues went to work, drilling and collecting a suite of ice cores from three sites sitting 6,000 feet above sea level (three on the Greenland ice sheet itself and one from an ice cap off coast). The team then measured physical and chemical properties of the individual layers comprising each core, tracking their melting and refreezing phases and documenting the history of melt intensity in Greenland for the past 350 years.

“By using ice cores, we can literally ‘drill back in time,’ and we are able to extend the observational period back in time ten-fold,” says Sarah Das, a glaciologist at Woods Hole Oceanographic Institution and a coauthor of the new study.

Multiple factors are coalescing to create multiple feedback loops, all exacerbating the ice and snow melt. One of these is the melt-albedo feedback, in which melting creates a more granular consistency of snow that absorbs more sunlight and melts faster. Melting also exposes darker ice to sunlight, which warms up and melts faster than lighter shades of ice. And when melting refreezes at higher elevations, it warms the surrounding snowpack, which means the following year it melts faster and more intensely. To twist the knife, that refreezing also makes the ice sheet more impermeable, which causes water to run off into the ocean rather that seep into the ice sheet’s spongy firn layer.

“What this means for the future,” says Das, “is that for every further degree of warming, we will lose much more ice, on the order of a doubling or more than we did for the same degree of warming in the past, leading to faster rates of sea level rise.”

The findings mirror the sorts of model-based conclusions others have come to when studying the modern history of Greenland ice. Unfortunately, while this study cannot predict for sure what will happen next, the effects will assuredly spell disaster if we do not clamp down on greenhouse gas emissions soon.

Trusel and Das hope to follow up on these findings by collecting more ice cores throughout Greenland and even in other areas like Antarctica. They’re especially eager to target smaller glaciers and ice caps that are disappearing fast—once the ice is gone, the environmental records they possess are gone forever as well. It will also be worth analyzing ice cores from the same four sites in another 10 years or so to see how the ice sheet has fared.

Despite how morbid the new findings are, the pair emphasizes it’s not too late to correct the ship. “The future is in our hands,” says Das. “If we take steps to reduce greenhouse gas emissions, we can slow down future warming and drastically reduce the future sea level impact from melting glaciers and ice sheets.”