Choose the right VR and AR gear for you

VR to your face! 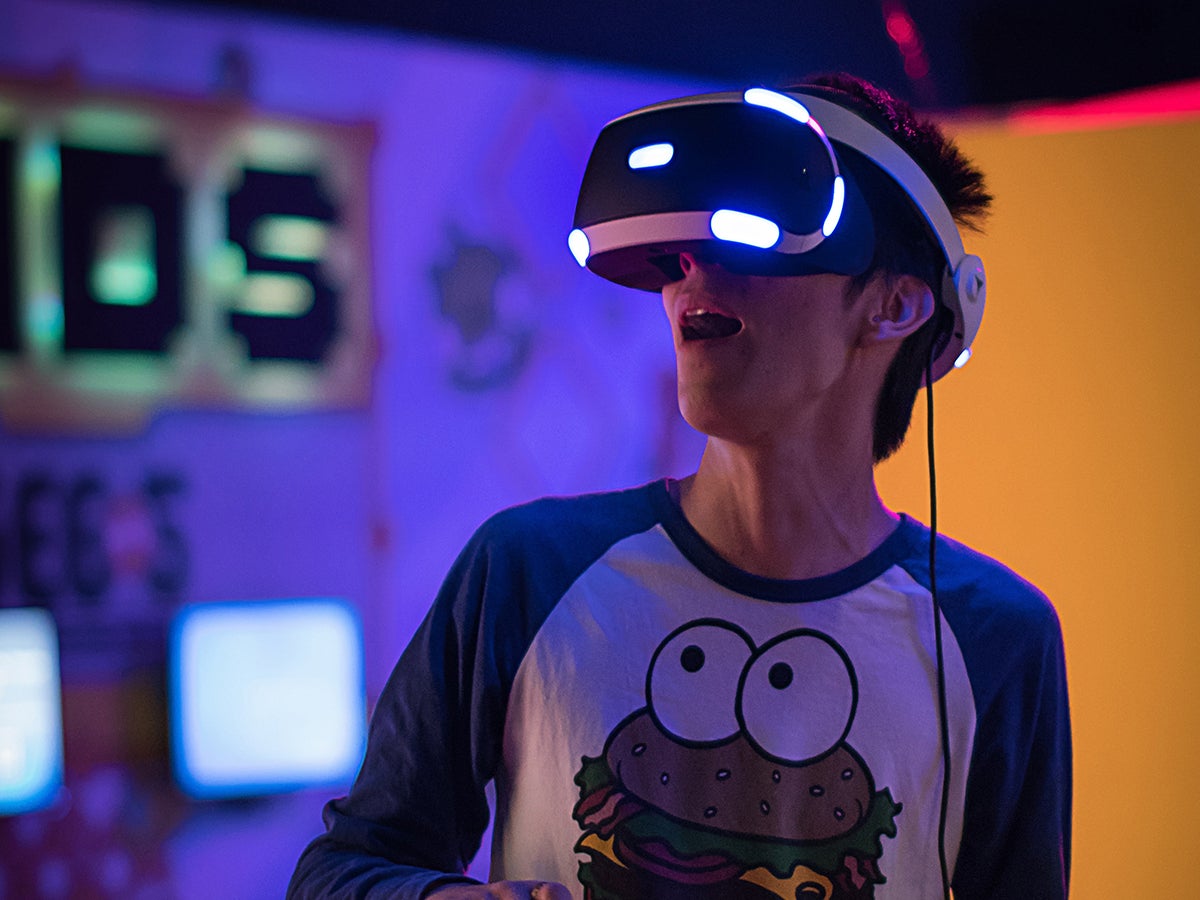 Wow, looks like you're havin' fun there, friend. How could you not get a headset for your little cheeseburger buddy? It looks like it's dying to know what you're seeing. Uriel Soberanes via Unsplash
SHARE

In the seven years since the Oculus Rift showed up on Kickstarter, we’ve seen a plethora of other virtual reality gadgets hit the market. Still, it feels like the tech has yet to make its mainstream breakthrough, and the recent emergence of augmented reality only muddies the waters for potential buyers even further.

The truth is that VR and AR gear has never been of a better quality, more affordable, or easier to get started with. Today, you can transport yourself to more immersive, computer-generated worlds than ever before, but the various devices available—and their specs—can be confusing.

So, let us be your guide to the various headsets and accessories on the market right now.

As often happens in the world of tech, the terms we’re going to talk about are rather fluid—companies, writers, sales people, device makers, game developers, and all the rest don’t necessarily use the same words the same way, which can be confusing. We could give you one definition now, and someone else could contradict us tomorrow.

Broadly speaking, though, VR refers to a completely enclosed, computer-generated world—none of the real world gets in. AR, on the other hand, features real-world elements (like the street ahead of you) mingled with digital elements (like a huge blue arrow showing you which way to turn).

Some in the industry also use the term “mixed reality,” or MR. This is where developers use lighting, shadows, and more to make digital elements match their real-world backgrounds as closely as possible. So while AR would be a text message graphic that pings into your eye line while you’re watching TV, MR would be a photo-realistic car that actually looks like it’s parked on the street outside.

Microsoft, for instance, tends to mention MR a lot, whereas Apple uses AR to describe everything that involves a real scene with digital elements on top (both the text graphic and the car, from our earlier example). As long as you keep those basic principles in mind, though, you should be able to work out whether someone’s talking about VR, AR, or MR.

It was the Oculus Kickstarter that quite literally kick-started interest in consumer VR, and in the years since, Oculus has put out several virtual reality headsets. Facebook bought the company for $2.3 billion in 2014. Right now, the company sells three headsets: the $399 Rift S, the $399-$499 Quest (depending on how much game storage space you want), and the $199-$249 Go (price again linked to storage space).

The Rift S and the Quest might be the same starting price, but it’s the former that’s the “gold standard” for VR. It needs to be hooked up to a gaming PC to work, and will then produce console-quality graphics when running the most-demanding VR games. With the Quest, everything you’ll need is in the headset—so no wires and no PC—but the visual quality is lower.

It’s a bit like the difference between console games and mobile games. If you want the best possible VR gaming experience, get the Rift S (especially if you already have a gaming PC). If you just want a good VR experience out of the box, with no other purchases necessary, get the Quest.

The Go, meanwhile, is like a cut-down Quest, with the equivalent of budget phone components inside it, rather than flagship parts. It runs on its own, unconnected to anything else, but can only cope with videos and the most basic of games. The Go can’t track you through space, either—it can only tell which way your head is facing—which limits what you can do with it.

Oculus itself is pushing the Quest as the best option for most consumers: It has everything you’ll need in the box, it’s powerful enough to run most VR games and experiences, and as mobile components get smaller and faster, it looks to be the future of the market, too.

The major rival of Oculus at the moment is HTC Vive, which really only has one flagship consumer VR product on the table right now: the $699 HTC Vive Cosmos. Like the Rift S, you plug it into a gaming PC to get started, after which it will track you through 360-degree space without the help of any extra sensors.

The Cosmos has a sharper overall display than the Rift S, a faster refresh rate (which should make VR experiences easier on the eyes), and it’s arguably a little more comfortable and stylish. It’s undoubtedly one of the best and most powerful VR headsets around, and it comes with a stack of great games and software, too.

Still, it’s difficult to recommend the Cosmos over the Rift S given the $300 price difference, so keep an eye on discounts that may be applied in the future.

HTC Vive does sell other VR headsets, including one that works as a standalone unit with mobile components inside it (like the Oculus Go), but they’re marketed mainly toward businesses. It’s possible the company may launch something along the lines of the Oculus Quest in the future, so watch this space.

If you want the very best that consumer VR currently has to offer, and you have a reasonably powerful gaming PC, then it’s a straight-up contest between the Rift S and the Cosmos, and the Oculus option is a lot cheaper. For many users, though, the Oculus Quest might represent the best way into VR right now, unless you happen to have a Sony video game console…

In terms of high-quality, immersive virtual reality, the PlayStation VR headset holds its own with the Rift S and the Cosmos, but instead of plugging this headset into a gaming PC, you use it with a PlayStation 4 (it’ll work with both a standard PS4 and a PS4 Pro). You’ll also need the PlayStation 4 camera, and a two-pack of Move controllers. Amazon will sell you the lot (minus a console) for a little more than $300.

In terms of its specs, the PSVR has a slightly lower resolution than the PC-based headsets and a slightly narrower field of view, though it does up the maximum refresh rate to 120 hertz (refreshes per second). The graphics quality doesn’t quite match the two top-shelf Oculus and HTC Vive headsets, and its motion tracking and controllers are a bit more basic, but the PSVR still provides a quality experience. And if you already own a PS4, it’s the perfect way into VR.

As it works with the PS4, the PSVR also has an excellent line-up of games, so you’ll have plenty of choice there. With the PlayStation 5 due out before the end of 2020, you might want to hold on and wait to see what else Sony has in store. But if you don’t want to wait, we’d say the PSVR is still a great option for getting going with virtual reality gaming.

The rest of the field

We’ve tried to simplify your buying choices here, so we’ve ignored a lot of the other hardware out there. Microsoft, for example, has been keen to push Windows Mixed Reality headsets from the likes of Dell and Samsung. These connect to a PC like a Rift S or a Cosmos, but they’re more affordable and a bit more technically limited. At the moment, they don’t seem to be a huge priority for Microsoft (or anyone else), though, and the best innovations and game developments are happening on the other platforms.

Speaking of Microsoft, you might have seen its HoloLens headset, which is very much an MR or AR experience. You can technically buy one of these yourself, but they’re very much focused around bespoke business uses, and not really suitable for the wider consumer market yet.

Companies including Samsung and Google have, in the past, made VR headsets that you plug your phone into, but these now appear to be on the way out, with no signs of replacements coming. The last few years have seen a lot of consolidation happen in VR and AR, which at least means the buying choices are now more straightforward for consumers looking for a way in.

The future of AR

As smartphones have gotten more powerful, they’ve become better able to cope with the demands of calculating and rendering 3D graphics in a real-world setting. If you’ve bought a top-end phone in the last few years, it might have come with some AR capabilities.

At the moment, these are mostly being used by games—take a look at Angry Birds AR on Android or iOS, for example, or Harry Potter: Wizards Unite on Android or iOS. These games work with your phone’s camera to display realistic computer-generated graphics that work with the physical scene in front of you. Other AR apps let you check out how furniture might look in your living room, or how a new set of shades might look on your face.

For now there’s no consumer-level AR headset to match the VR ones from Oculus and HTC Vive, though that doesn’t mean there won’t be one. Apple, for one, has long been rumored to be working on a pair of AR specs, and if they eventually appear, it might just prompt a return for Google Glass.