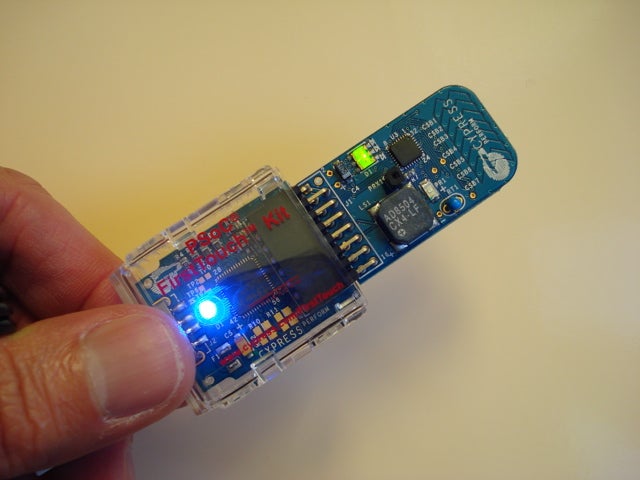 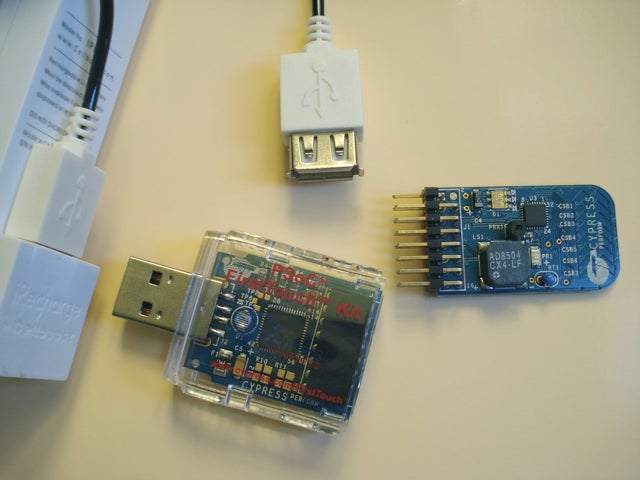 This “alternative” is a relatively new kid on the embedded design block called PSoC® FirstTouch, from Cypress Semiconductor Corporation. The Cypress PSoC is better known as a programmable mixed signal array or Programmable System-on-Chip (PSoC). While sporting an 8-bit microcontroller clocking in at a maximum 24MHz and supporting 512 bytes of SRAM, 8KB flash, these rather lackluster specs are offset by four analog and four digital customizable advanced peripheral building blocks (known as PSoC Blocks), and the ability to build a crazy-small microcontroller project.

How small, you ask?

Well, the entire PSoC microcontroller fits roughly on a 1-by-2-inch PCB, which includes a USB interface and type-A plug! This PCB is called the FirstTouch PC (FTPC) Bridge. It’s encased in a sealed transparent enclosure. But the real magic happens with the interchangeable FirstTouch Multifunction (FTMF) Expansion Card. Although narrower than the FTPC Bridge, the FTMF Expansion Card is bristling with sensors, output indicators, and human interface devices (e.g., an eight-segment capacitance input slider; just slide your finger along the slider for varying your input).

All of this hardware excitement would fall short if not for the nifty drag-and-drop “code-less” programming environment (based on Microsoft’s Visual .NET Framework) that supports the FirstTouch PSoC. Just like the Arduino’s elegant programming language, FirstTouch’s coding interface consists of an integrated development environment called PSoC Express and a graphical user interface programmer. That’s where all other similarity with Arduino’s Processing programming paradigm ends, however. 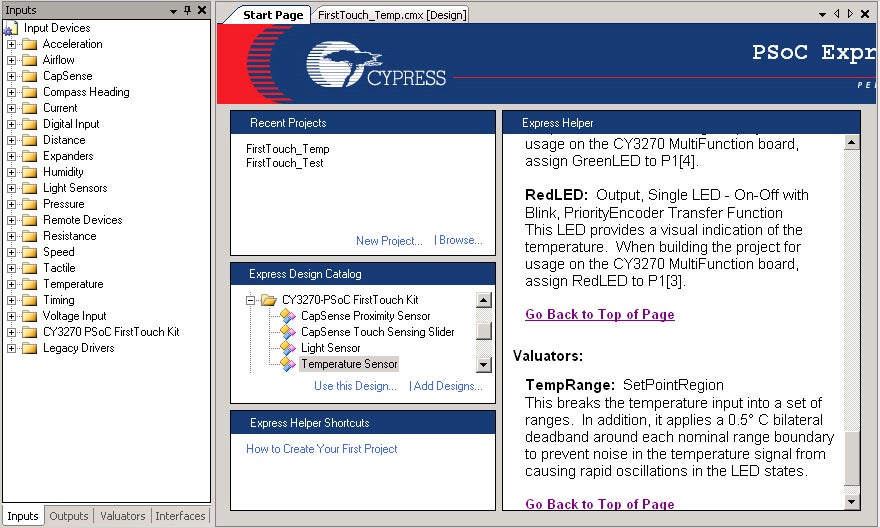 Unlike “writing” C code, PSoC Express relies on a series of devices which integrate with the peripheral analog and digital PSoC Blocks. You don’t write no stinking code, here, man. You just find the sensor, input device, or output device that you want to use, drag it onto the Design surface, and then connect your building blocks together with some dot-to-dot linking truth tables known as Transfer Functions. When you’ve completed your programming design, you can test the program’s logic with a visual simulator. If everything checks out OK, it’s off to build, compile, and program your design on the FirstTouch PSoC. 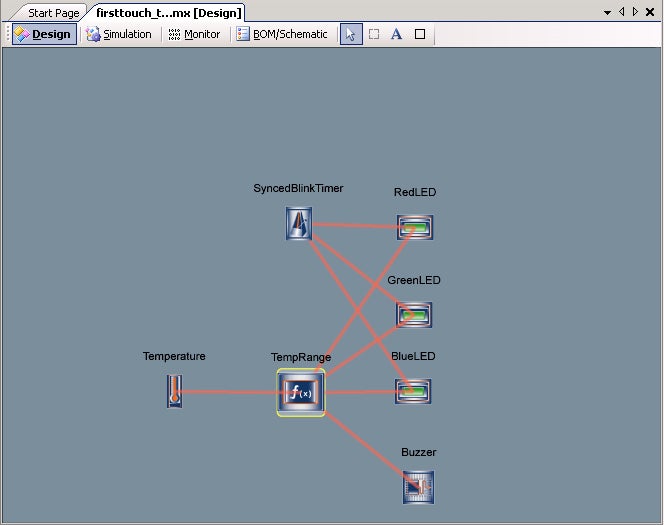 Although the FirstTouch kit does not allow for portable operation, I was able to make my temperature sensor operate independently from a PC’s USB port with a discontinued rechargeable battery pack for an Apple iPod shuffle (1st generation) available from All Electronics. Just make sure to snip the clips off the battery pack’s recharging port cap. This simple modification will make it easier to hold both the FirstTouch PSoC FTPC Bridge + FTMF Expansion Card and the rechargeable battery pack. Now you can run around the office and “sample” temps. Or carry it on the street and let the buzzer shriek as your fingers freeze in the winter.

Kludging together a quick and dirty hardware/software design with a microcontroller has never been so easy. Plus the final form factor is ideal for a simple “proof of concept” evaluation prior to committing valuable resources to a full-blown design.

The biggest drawback to FirstTouch, however, might be the unbelievably bright blue LED that is housed in the FTPC Bridge. This crazy-bright LED flashes incessantly during design, development, and programming. Later, when your PSoC design is being tested via the portable battery pack option, this blue LED glows brighter than the indicator LED on the FTMF Expansion Card. Replacement of this LED might be possible with an 0805 package SMD LED along with a more potent SMD 0805 package resistor (i.e., R13 on the underside of the FTPC Bridge PCB). A dab of black ink on the LED lens will suffice, too.