Make An LED Holiday Light Out Of Pennies

And a lemon, and some other stuff. But mostly pennies. 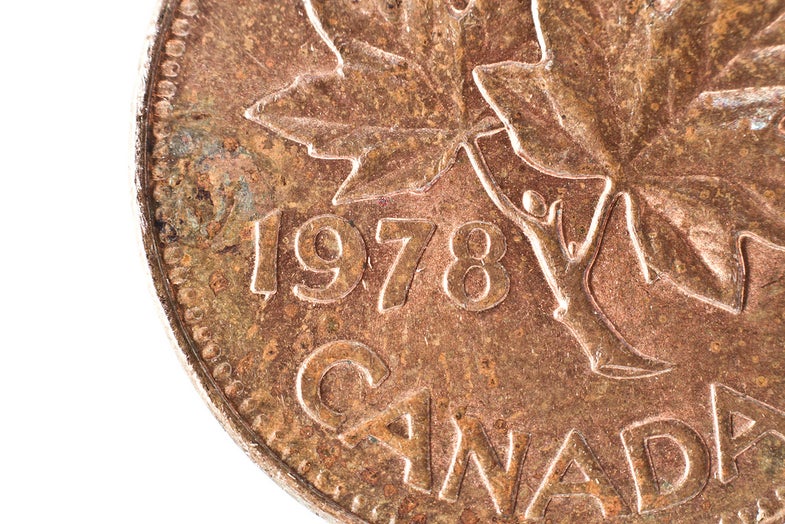 Skip the tangled strings of holiday lights this year and go wireless using a few copper-coated cents. U.S. pennies minted since 1982 conceal a zinc core. If exposed to acid, the zinc dissolves and frees electrons for use in a circuit. The battery will run until the liquid dries up or the chemical reaction dies. DIY enthusiast Grant Thompson recently made a 10-penny battery that powered a small light for nearly two weeks. See how far you can stretch your money.

1. Fold a piece of duct tape into a sticky square, attach it to a table, and affix a penny. Sand one side until the zinc is fully exposed. Repeat for all but one penny.

2. Cut discs of cardboard—one for each penny—slightly smaller than the coin. Soak the cardboard in fresh lemon juice (vinegar is less acidic but works).

3. Lay a sanded penny copper side down on a table and add a damp cardboard disc on top. Repeat until you have a stack of at least five pennies and four discs.

4. End the stack with the intact penny. Wind electrical tape around the cylinder; the more airtight the seal, the longer the battery will last.

_This article originally appeared in the December 2013 issue of _Popular Science.

batteries
Build It Videos
build it yourself
cheap tricks
december 2013