Looking to get away to Paris this winter, but concerned about the cost? Worry not; for the price of a... 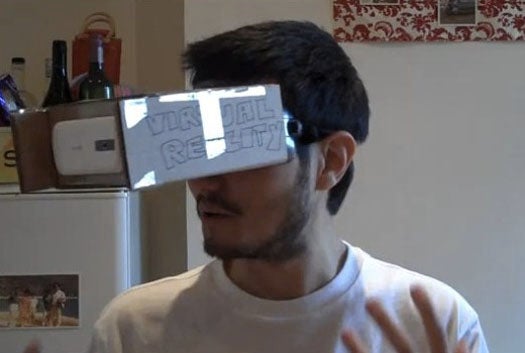 Looking to get away to Paris this winter, but concerned about the cost? Worry not; for the price of a pair of lab safety goggles, a cardboard box and an HTC Magic (even better if the HTC magic comes in a large cardboard box), this DIY augmented reality headset can transport you anywhere in the world, just as long as the Google Street View team has been there first.

The rudimentary setup takes advantage of the Magic’s compass to enable the viewer to pan around in Street View simply by turning his or her head. While our demonstrator, Recombu’s Andrew Lim, takes his Google goggles for a staycation spin around Paris in Street View, we’re more intrigued by the possibilities of taking the Goggles out of the house, using an AR app like Layar to layer information over the view from the Magic’s camera. Or, as Gizmodo’s John Hermann points out, you could swap to an iPhone 3GS and take Yelp’s new AR resto hunting app for a spin.

Of course, searching for a lunch spot on Park Avenue with a cardboard box tethered to your face might draw some sideways glances from passers by. But while Lim’s DIY virtual/augmented reality box resembles elementary science fair fare, it’s an interesting look into what will likely be the heads-up displays of the future: glasses that double as displays for all kinds of information that augments the world around us. Kind of like the vision Nokia released in a video a couple of months ago, but without the lame Lilith Fair soundtrack and egregious overuse of emoticons.