Jump into a new world. 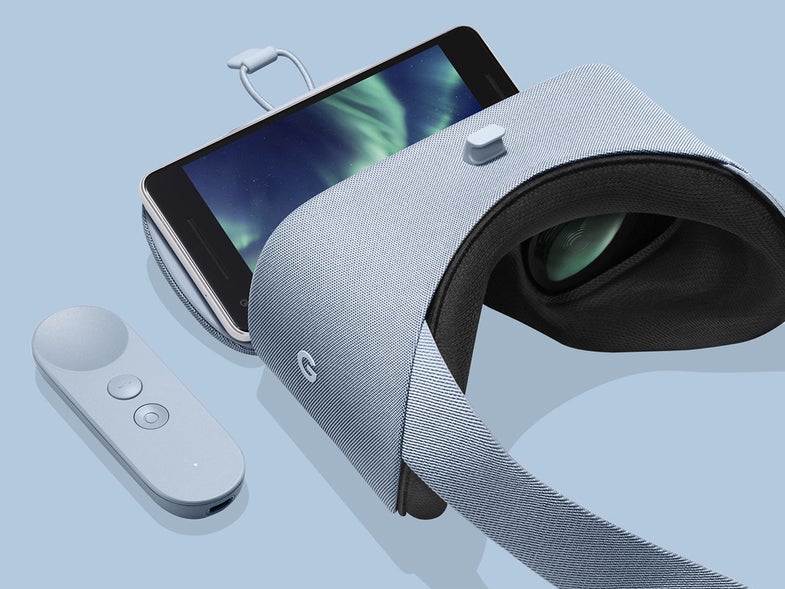 If you want to experience virtual reality without breaking the bank, you may have considered Google’s $100 Daydream View headset, which relies on a smartphone to bring the wearer into new worlds. Once you purchase your new toy, you’ll want to download the best games and apps for the device—and we’ve handpicked some of our favorites.

First, you will need a Daydream-compatible phone to install and run these apps inside the headset. That means you must own any Pixel phone, or a Samsung Galaxy S8, Samsung Galaxy S8+, Galaxy Note 8, LG V30, or Moto Z2 Force. You can find a full list of compatible phones here. You’ll control most of the games with the help of a hand-held remote that comes with the headset.

With the hardware out of the way, let’s get to the apps. These will all run on last year’s original Daydream View, as well as the upgraded 2017 version.

Wonderglade provides a collection of fun carnival games with a VR twist. You might play a few holes of crazy golf, throw some basketballs through levitating hoops, or spray a hose to put out a fire in a miniature town. As you progress, you unlock new activities. To access even more premium games, you have to pay. However, prices start as low as $1, and you can explore plenty of games for free.

This app really shows off how enjoyable mobile VR can be—the mini-games are well-designed, the graphics are sharp, and the controls feel intuitive. Free, with extra content starting at $1

Imagine your Daydream View headset is a deerstalker hat, and you’re in the right frame of mind for Sherlock VR. This app leads you through a series of incredibly detailed and well-rendered rooms. To solve the case, you’ll need to spot the clues in each chamber.

Although this game runs a little short, and you have to stump up some cash for it, those who like playing detective will get a kick out of this one. It should appeal to anyone who likes their VR experiences slightly slower and more cerebral. $2

On a browser or phone, Street View shows you the view from outside your house, in front of the Taj Mahal, or just about anywhere else on the globe. In VR though, it gets even more impressive. First of all, you can peer all around you in 360 degrees to check out the sights. This gives you a taste of touring a world-famous landmark or visiting a potential vacation spot. But the app really shines by letting you quickly zip up and down roads with a flick of the Daydream controller.

Travelers of all stripes should check this one out. Even if you’re more of a homebody, you have nothing to lose—the app costs nothing. Free

This fantastically well-designed and rendered game places you right in the middle of a mystery in a remote coastal town. You can interact with characters with your voice and explore the world with your Daydream controller. Perhaps the most impressive part of the whole package is the eerie atmosphere it creates as the mystery builds.

While you can find plenty of short demos for mobile VR (aka the headsets that rely on phones), in-depth games aren’t as numerous. Of all the top-quality contenders, Untethered sits near the top of the heap. So if you’re interested in flagship games—and you’re willing to pay for them—then this is for you. $5

Need for Speed No Limits VR

Right up front, we should acknowledge that this is a pricey game. But at the moment, it also happens to be one of the best titles for the Daydream View. Need for Speed No Limits VR gives you a high-octane, long-lasting racing experience across 12 tracks and 60 events. While the controls are a little limited—after all, you’re using a Daydream controller rather than a standard console gamepad—the graphics really stand out.

The buzz of racing around in a 360-degree world will make you glad you splashed out on a VR headset. $15

The name is a bit of a giveaway here: It’s Netflix, in virtual reality. This app is perfect for binge-watching addicts—and for demonstrating how VR works to friends and family who haven’t experienced it before. It lets you watch all your favorite shows on a massive screen in a cozy cabin. Unfortunately, you can’t walk through virtual representations of House of Cards or Stranger Things, and you do need a Netflix subscription to access the videos.

Don’t have a cinema room at home? This is the next best option. Free with Netflix subscription

This game is perfect for VR because you don’t have to physically move all that much. Instead, you must spot clues and solve puzzles in every room you enter in order to help defeat an unknown foe. The app includes plenty of variety and nuance to hold your interest, and the visuals and audio are very well done throughout.

Those who like a peaceful and reflective experience from their VR titles might want to skip this one: Each level is timed, so you’re racing against the clock. Competitive puzzler-solvers, however, will have a blast. $5

Coloring VR encourages you to calm down, put your feet up, and relax inside a virtual-reality coloring book. It presents you with a set of simple scenes and a palette of colors with which to fill them in, wielding your Daydream controller like a virtual paintbrush. Unfortunately you only get one canvas for free—extra ones cost $2 each.

As far as painting programs go, the app isn’t particularly sophisticated, but it’s a great way of escaping the world and chilling out for a few minutes. Or hours. Free, with extra content starting at $2

Widely regarded as one of the very best games for the Daydream View, and with a hefty price tag to match, Eclipse: Edge of Light drops you on the surface of a strange and beautiful planet filled with hints of alien life. Your challenge is to uncover the secrets of this world and the once-vast civilization that lived there.

Everything in the game, from the graphics to the sound to the storyline, feels carefully crafted. You’ll have to drop nearly $10 to get your hands on it, but it’s one of the best examples of how good mobile VR can be. $9

The Daydream View is particularly well suited to 3D puzzlers like Mekorama VR. In this game, you have to guide a diminutive robot called B around a series of increasingly complex levels. While the app comes with 50 levels, you can collect additional ones designed by other web users, so you won’t get bored any time soon. You can even make your own miniature worlds for B to explore.

If you know the hit puzzler Monument Valley, Mekorama runs along the same lines, but in virtual reality. Go forth and conquer it! $4