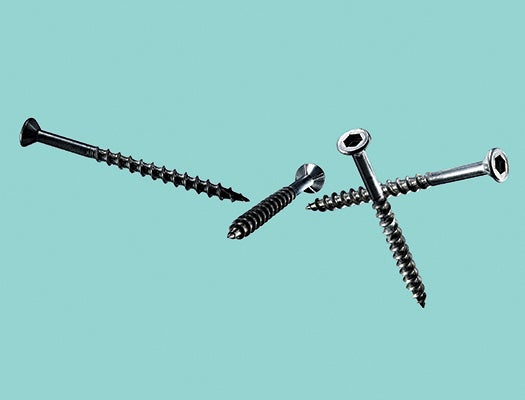 The common screw may not have been screaming for a makeover, but consider its shortcomings: stripped heads, tedious pilot holes, endless bit swapping. The company Outlaw has developed a new fastening system that cures all those headaches and could unseat the Phillips head as the bench standard.

Three tiers of hexagonal recesses in the screw head provide 18 points of contact with the Outlaw bit. (A standard Phillips head has only four.) More contact means better grip, which makes the bit less likely to slip and strip the fastener. Shorter Outlaw screws have two recesses (12 contact points) but the same hexagonal shape.

As you drive a screw, small ridges on the underside of the head helps cut a shallow groove into the work surface. The extra space allows the screw head to rest flush with the surface instead of on top of it.

Forget predrilling pilot holes. Outlaw screws have extra-sharp self-drilling tips, so they can bore their own way through wood.

Outlaw’s corresponding screwdriver bit has a three-tiered hexagonal tip that matches any of the company’s screws. Because the bit makes more contact with a given fastener, it’s able to hold onto screws more firmly and drop fewer of them.