Not As Sexy As Stealth, But Maybe More Important: China Shows Off New Cargo Planes

While China’s new stealth jet, the J-31, has been getting most of the press attention at the Zhuhai Air Show,... 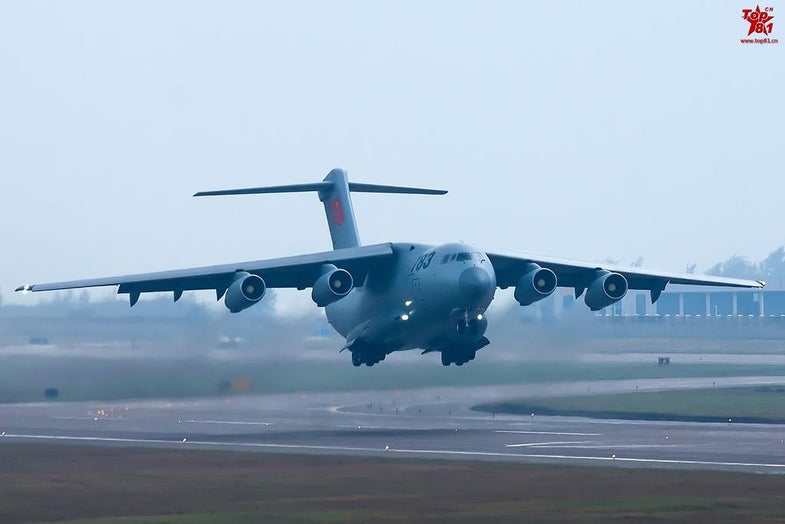 "783" Y-20 takes off at Zhuhai 2014. While it currently uses Russian D-30 engines, production versions will have the WS-20 engine, which will enable the Y-20 to carry larger payloads, go further, and take off on shorter landing strips. http://www.top81.cn/
SHARE 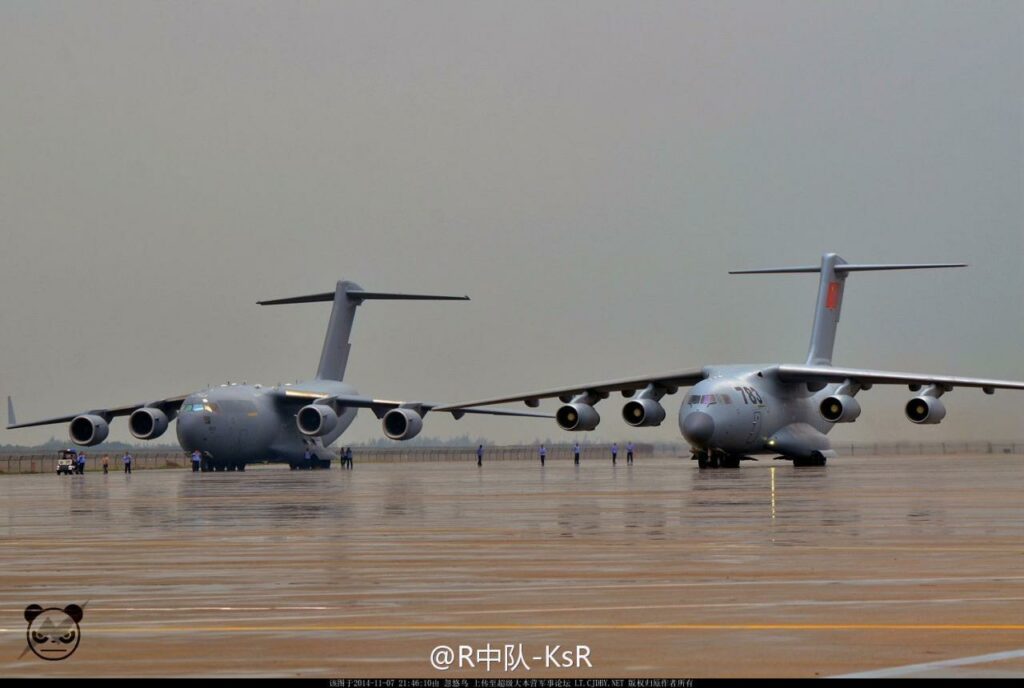 While China’s new stealth jet, the J-31, has been getting most of the press attention at the Zhuhai Air Show, its new cargo planes may be the most strategically significant in the longterm. America’s strategic airlift capability has long been a key differentiator for its superpower status, but China is demonstrating that it is also deeply interested in that field as well. 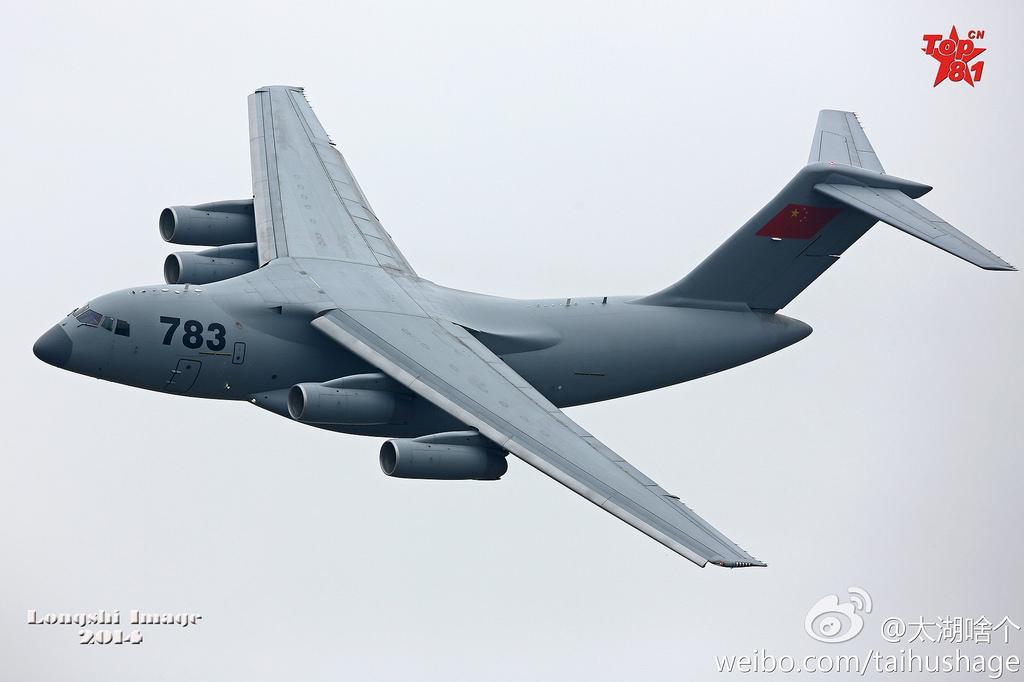 The prototype “783” Y-20 makes a crowd pleasing flyby at Zhuhai 2014. Capable of carrying 66 tons of payload, large enough to fit in a tank, the Y-20 will provide China with an unprecedented level in regional, and eventually global, rapid military force projection. 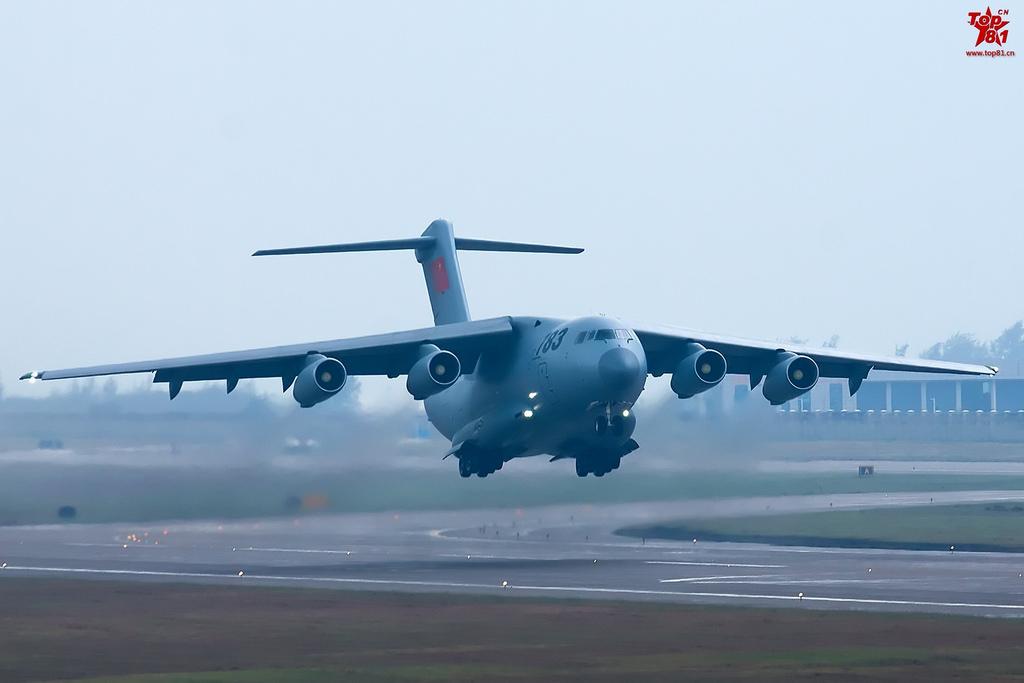 “783” Y-20 takes off at Zhuhai 2014. While it currently uses Russian D-30 engines, production versions will have the WS-20 engine, which will enable the Y-20 to carry larger payloads, go further, and take off on shorter landing strips.

The Y-20 is the largest aircraft ever built in China. Notably. If Boeing stops making the C-17 Globemaster III (another Zhuhai guest) as planned in 2015, the Y-20 will become the largest military airlifter in production. Currently, Xian Aircraft Corporation has flown at least two flying prototypes, “781” and “783” have been built (“782” is a factory static testbed). The Y-20, despite being slightly shorter than the Russian Il-76, can carry a greater payload of 66 tons at a maximum takeoff weight (MTOW) of 220 tons, once domestic WS-20turbofan engines replace the current Russian D-30 turbofans. The Y-20will give the Chinese military to quickly deploy infantry, tanks, anti-air and anti-ship missiles throughout Asia, as well as humanitarian aid. The Y-20 could also be modified into an airframe for other strategic missions such as an Airborne Early Warning and Control (AEW&C), an anti-satellite laser carrier, and aerial tanker. 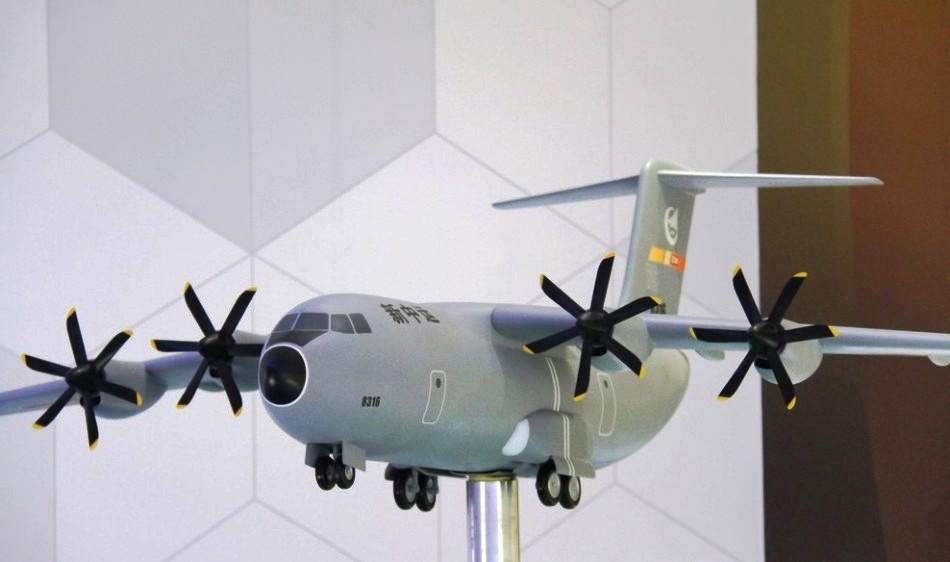 The Y-30 medium transport aircraft will fill the gap between the lighter 20 ton payload Y-9 and the heavy 66 ton payload Y-20. With a payload of between 30-40 tons, the turboprop engined Y-30 will serve a variety of tactical Chinese missions like paradrops.

Currently, the Y-30 is only a model, but advanced enough in its development cycle to receive an official PLAAF designation. The Y-30 is a 80-100 ton transport plane, with a payload of between 30-40 tons. Shaanxi Aircraft Corporation’s Y-30 has four turboprop engines mounted on a high wing, and a wider body compared to the Y-9, China’s current tactical airlifter. Shaanxi may have chosen to use older turboprop technology in lieu of turbofan engines to allow for safer operations from rough, debris choked airstrips on the front lines. The Y-30 would likely carry paratroopers, airdropped supplies, self-propelled artillery and infantry fighting vehicles during air assault missions. 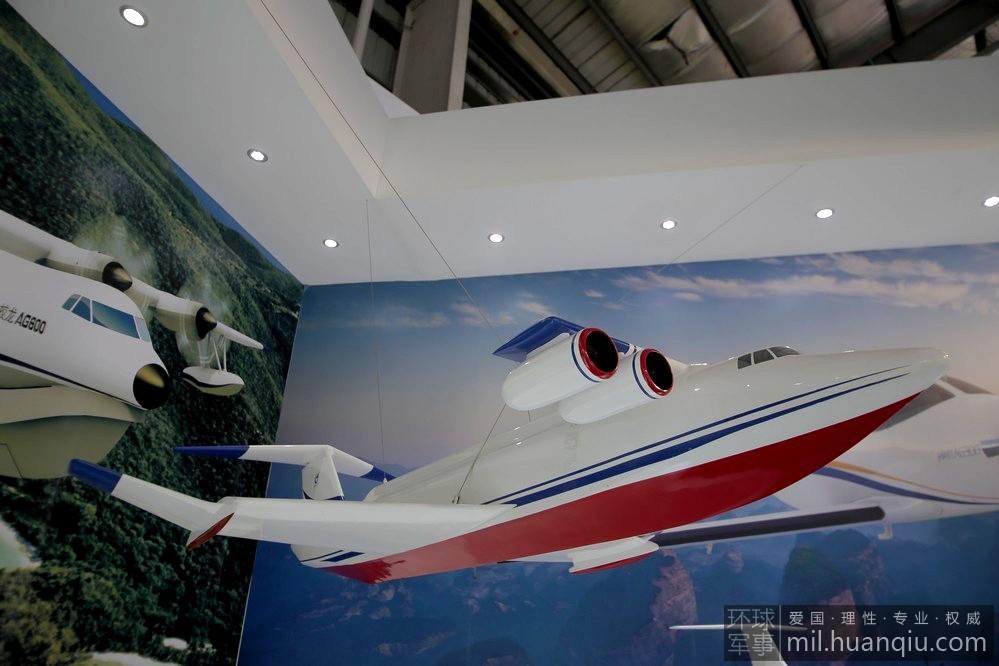 The Sea Eagle H680 will be the world’s biggest in service ekranoplane, if produced. With four turbofan engines, it can carry 50 tons of cargo. It won’t be as fast as most aircraft, but it’s more fuel efficient and doubles as a sea plane.

Sea Eagle H680 is a new ekranoplane concept offered by Harbin. Also known as ground effect vehicles, these type of planes occupy the operational space between a massive hovercraft and traditional aircraft. The model shows four turbofan engines (likely WS-20) to propel the H680 at speeds of up to 150 miles per hour, through directing the thrust of the engines against the ground to create a Wing Ground (WiG) effect. Given that the MTOW of the H680 is about 200 tons, its maximum payload would be around 50-60 tons (the Soviet Lun ekranoplane had a similar 4:1 MOTW/payload ratio). The Sea Eagle is suitable for air and water takeoff and landings, making it useful to conduct amphibious assault and anti-submarine warfare operations. Its high speed also means that the H680 could resupply and reinforce island garrisons 7 times as fast as landing platform docks and replenishment ships, and without the need for a large airstrip, compared to the Y-20. 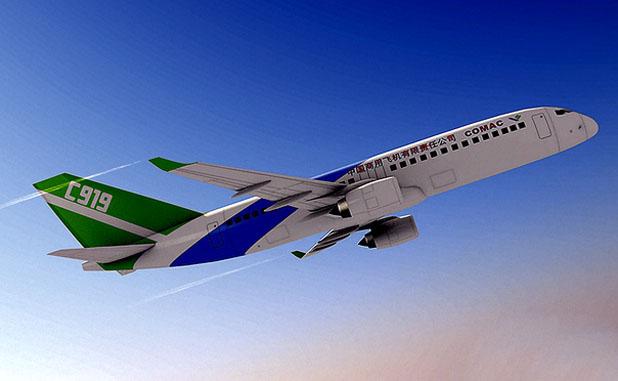 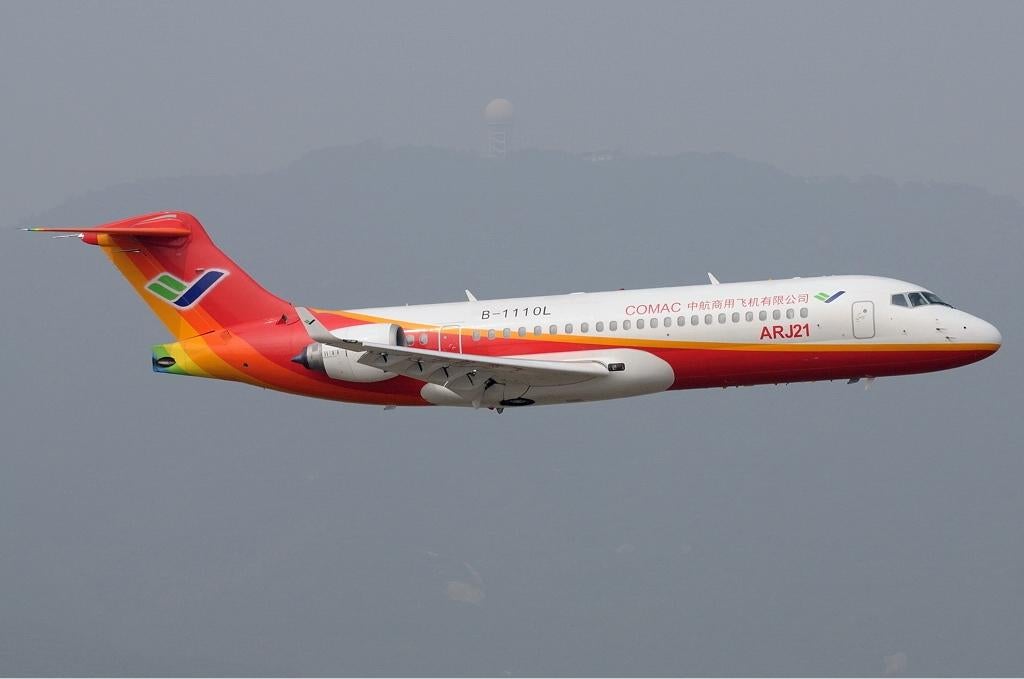 The ARJ-21, China’s most advanced flying jetliner, scored more orders at Zhuhai 2014, including three from the Republic of Congo. Chengdu Airlines, the launch customer, hopes to receive its first ARJ-21 by the end of this year. 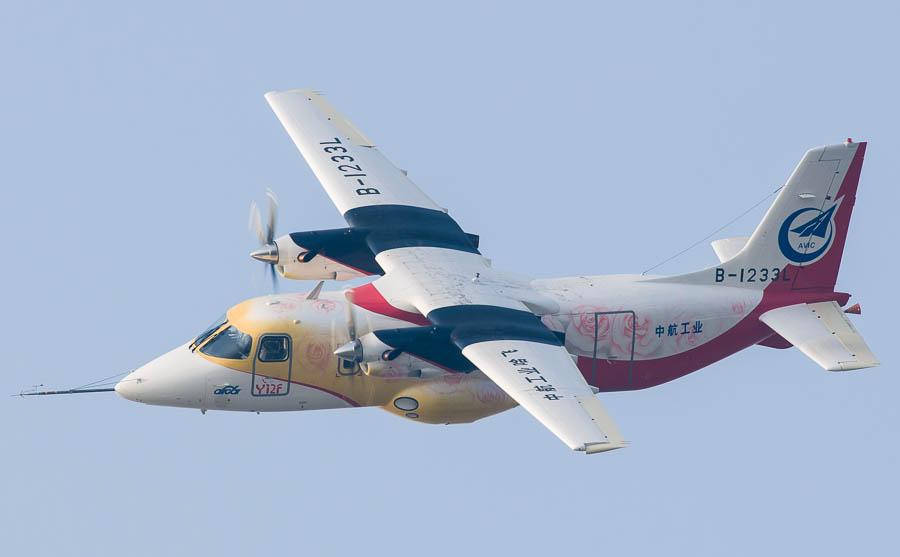 The Y-12F became the first Chinese civil aircraft to be sold to America; a U.S. airline is buying 20 Y-12Fs for service on a Las Vegas to Grand Canyon route.

On the civilian side, China’s commercial line manufacturer has received more orders for its jetliners and turboprops. China Merchants Bank has agreed to order 30 C919 jetliners for its leasing company; the C919 prototype should fly by the end of 2015. The Republic of Congo has purchased 3 of the smaller, long delayed ARJ-21 jetliners (COMAC hopes to have the ARJ-21 certified by the FAA in the future). And in a first for Chinese aviation, Harbin Aviation Industry Group sold 20 Y-12F utility airliners to a US airline, for use on a Grand Canyon to Las Vegas route.