Cruising along in a car of their own design–part kite surfer, part wind power turbine, part EV–a German duo has... 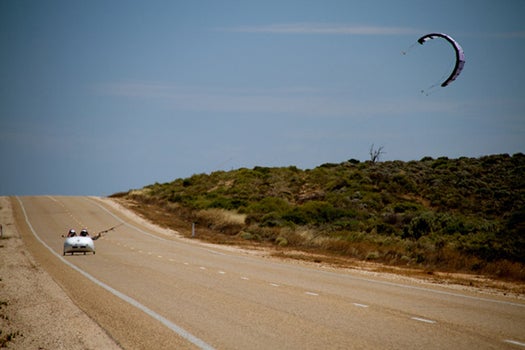 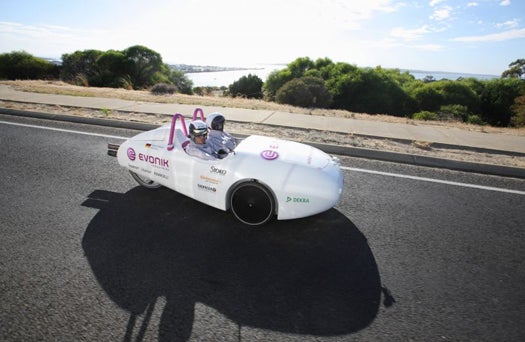 Cruising in the ‘Wind Explorer’

Cruising along in a car of their own design–part kite surfer, part wind power turbine, part EV–a German duo has driven across the vast majority of southern Australia on about $15 worth of electricity. According to their own account they’ve set several records for their particular class of vehicle in doing so, and we’re inclined to believe them if only for the fact that we’ve never seen anything else quite like the “Wind Explorer.”

Like many eco-minded innovators before them, Dirk Gion and Stefan Simmerer wanted to create an emissions-free source of personal transit, one free of both direct carbon emissions and secondary emissions from consuming fossil-fuel derived electricity. So they built the Wind Explorer, a 441-pound auto that transports its own wind turbine–a 20-foot bamboo mast that can be fitted with a 9-foot-diameter rotor–for charging the 8 kWh batteries during the night.

But that’s not the only sense in which the car is wind-powered; with the right crosswinds, the passenger can deploy a parachute-like kite (similar to those used by kite surfers) to provide added thrust for the car.

It’s important to note that the Wind Explorer’s journey from Albany in southwestern Australia to Sydney in the east wasn’t entirely unplugged. During early technical adjustments and fine-tuning of their equipment the team plugged into the grid from time to time, as they did during Cyclone Yasi when they couldn’t erect their wind turbine due to the weather.

But their point was never to prove that they could cross a continent with a zero-total carbon footprint, but rather to show that there are different ways to think about automobile travel outside of the existing paradigm. And they’ve certainly succeeded at that. Have you ever seen a kite-surfing, turbine-toting, electric vehicle before?