After nearly four days, 1,860 miles, and lots of baking Australian sun, a team from Japan's Tokai University edged out 31 other competitors to bring home a solar victory in the 2009 Global Green Challenge 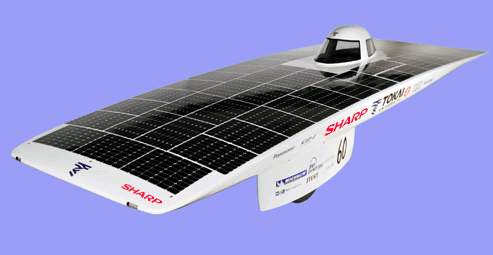 A team of solar-car scientists from Japan’s Tokai University turned the intense rays of central Australia into victory in the 2009 Global Green Challenge. The team covered nearly 1,860 miles over four days in their solar-powered Tokai Challenger to claim first place among the Challenge’s solar-vehicle field.

The win shut down a four-win streak by Dutch utility Nuon, which as of this writing was still battling the University of Michigan for second place. The Tokai Challenger, which is equipped with six square meters of 1.8 kW compound solar cells developed by Sharp for outer-space applications, placed fourth in qualifying at an average speed of 50.87mph. During the race, the team reportedly took the lead on day one, and stayed there all the way to the finish line.

Thirty-two solar vehicles from 16 countries made the start of the 2009 Global Green Challenge last Sunday. The bi-annual Global Green Challenge has separate categories for hybrid, electric, and other forms of alternative energy vehicles. Tokai’s victory is the first by a Japanese team since 1993 when the Honda Dream II took first.