The fastest, most powerful Bentley ever is serious fun for the big-bucks crowd. It can also burn ethanol, adding just a touch of greenness 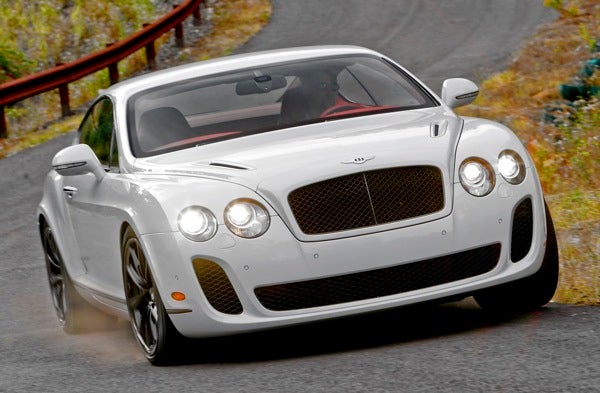 The Continental GT Supersports is the fastest, most powerful Bentley ever built. It can also run on ethanol, for reduced carbon emissions. Bentley Motors
SHARE

If you’re of the mind that consuming natural resources for anything but the basic needs of civilization – sustenance and the like – is irredeemably decadent, log off now and go aerate a compost heap or dig a well for a needy village. The Bentley Continental GT Supersports is definitely not your bag of soy.

On the other hand, if you think it possible – by way of octane-rich biofuel – to reconcile massive, brain-pan-sloshing displays of horsepower and torque with a reduction in carbon emissions while keeping a straight face, then by all means read on.

Bentley’s comeback-kid Continental GT, introduced in 2004, was better known as a grand tourer than a jagged-edged racetrack scamp. Then came the GT Speed, which added more power and nimble road manners, and it became the first Bentley to reach over 200 miles per hour. Then, a 24-month skunkworks project yielded the Supersport, an even more powerful variant that’s also lighter and, set up to run on ethanol – large quantities of it – emits less CO2.

Of course, only the most passionate lovers of internal-combustion engines might cut Bentley slack for kicking off an environmental sensitivity project with a fuel-swilling, neck-snapping bruiser of a sports car. But the Volkswagen-owned company has committed to cutting carbon emissions, and you can’t deny the Supersports is a conversation starter in that regard. Bentley says using biofuel in the Supersports sums to 70 percent less emissions “well to wheels,” which takes into account all the CO2s emitted as fossil fuels go from primordial ooze to food for supercars.

Plus, since the average Bentley owner has six other cars in his garage to choose from, a typical model logs just 8,000 miles a year. It’s possible one of those cars in heavier rotation might be a Prius, or a bicycle.

But enough sturm und drang. The Supersports’ reason for being is simply outrageous fun. It gets power from the typical Bentley 6.0-liter, twin-turbocharged W12, tweaked to 621 hp and 590 pounds-feet of torque. That sounds like a lot, but the 12-pot has to pull serious weight — 2.5 short tons. That’s 4,939 pounds – a ton more than a Ferrari F430. Nonetheless, the Supersports’ power-to-weight ratio works out quite well, indeed.

A strategic weight-reduction plan helped push the right end of that ratio downward. Swapping the Continental GT’s luxury seats with lightweight racing buckets from Sparco, clad in diamond-stitched leather and alcantara (a grippy faux suede), along with other interior shavings cut 157 pounds. Changing the big steel brakes with carbon-ceramics saved 44 pounds of unsprung mass, new wheels: 22 lbs, chassis mods: 20 lbs. It doesn’t sound like much, considering the traditional Continental GT weighs over five large, but the physics of it all belie the numbers.

That means it can dance. Imagine the late Andre the Giant in the Ballet Russe. Light, quick steering and heightened antiroll hardware connive to give the massive Supersports the alert feel of a smaller car hauling around far fewer pounds. Along the winding secondary highways of upstate, New York, the Supersports flitted from hill to dale like a Kodiak bear performing Cirque du Soleil’s “flying man” act (the one where they hang from the ropes). Hat tip to the engineers.

Keeping all that power under command is a traction control system that’s been modified for the Supersports’ higher performance. It’s more compliant than similar systems. If a driver overcooks a turn and loses traction, for example, the system’s software algorithm can detect a skilled move to correct, or a ham-fisted saw at the wheel. In the case of former, the ESP will add a strategic touch of brakes, but won’t intrude to cut power like others do.

There’s no manual transmission offered, but Bentley and supplier ZF worked up a quick-shifting automatic with sport and manual modes. It’s plainly up to the task of managing torque. And speaking of torque, the typical Bentley all-wheel-drive system gets a new 40:60 torque split front to rear — in contrast to the GT Speed’s 50:50 split — which allows for some tail-out truancy, especially with the traction control disabled.

As for Bentley’s flex-fuel plan, engineers hardened the valve seats, altered the gaskets and performed some sensors-and-software work to accommodate gasoline, E85, or any blend of the two. Power is calibrated to be the same no matter which fuel is used, despite ethanol’s higher octane. Sadly, no higher-compression mode exists under corn or sugar-cane power.

Lookswise, Bentley accentuated the Continental’s traditional hooligan-in-a-waistcoat muscularity with a wider track in the rear, hood-mounted cooling vents and smoked-chrome brightware, adding a bit of understatement that goes a long way.

And then, there’s the price — solidly in the if-you-have-to-ask range. The Bentley Continental GT Supersports will sell for nearly $280,000 when it goes on sale this year. That’s a lot of soybeans.

The Continental GT Supersports is the fastest, most powerful Bentley ever built. It can also run on ethanol, for reduced carbon emissions. 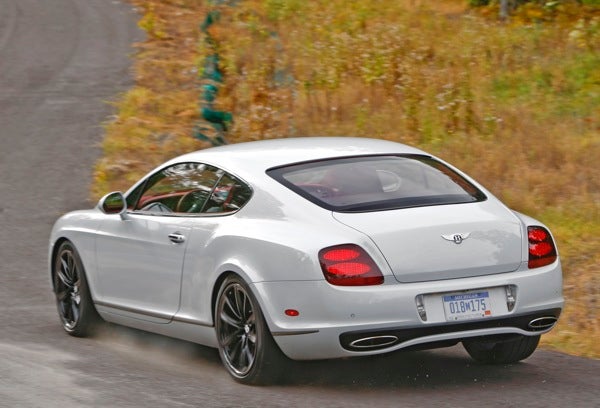 A pricey variant of the latest Bentley Continental GT, the Supersports has enormous power and torque and the road feel of a car much lighter than its nearly 5,000-pound mass. 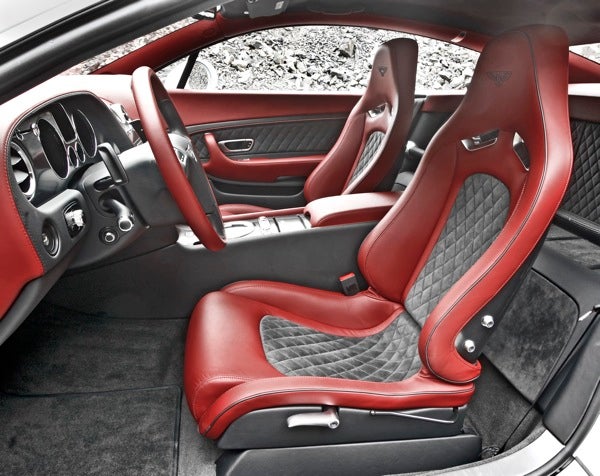 Bentley engineers shaved 243 pounds off the Continental GT Speed to build the Supersports model. Much of the weight savings came out of interior fittings. Changing the traditional plush seats with a set of luxuriously-clad Sparco racing buckets eliminated 100 pounds. Other tweaks, like deleting the rear seats, saved 57 pounds. 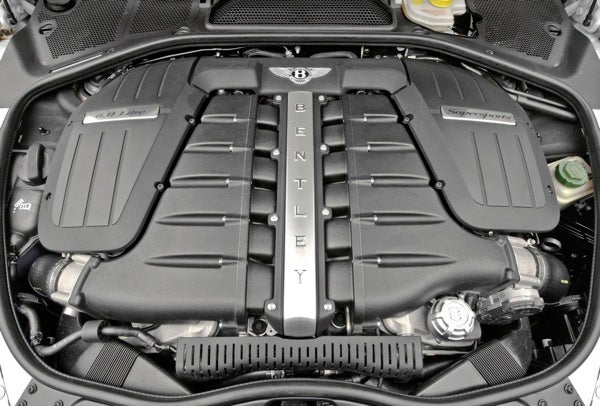 Power to satisfy the Bentley Boys. The 6.0-liter, twin-turbocharged W12 gets a boost to 621 horsepower and 590 lb-ft of torque, for a zero-to-60 time of 3.7 seconds — putting it solidly in supercar range. The Bentley Boys, a group of wealthy British playboys who raced Bentleys during the 1920s, would be proud. 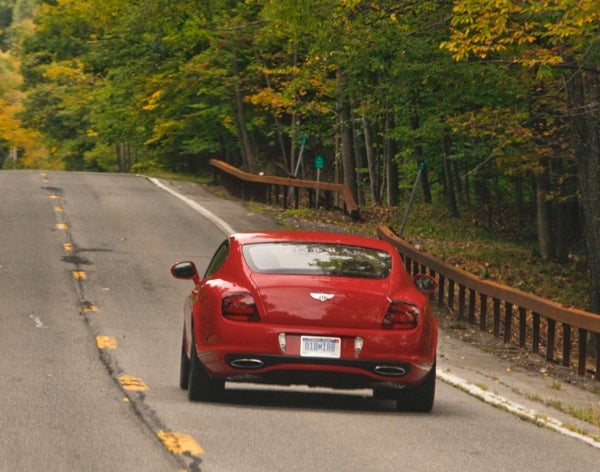 Volkswagen-owned Bentley committed to cutting carbon emissions, and the company says using biofuel in the Supersports sums to 70 percent less emissions “well to wheels,” accounting for refining and transporting fossil fuels. To prep the Supersports to accommodate gasoline, E85, or any blend of the two, engineers hardened the valve seats, altered the gaskets and performed some sensors-and-software work.
auto news
bentley
Cars
ethanol
Test Drive