You Built What?! A Real-Life Version of the Atari Classic Lunar Lander

The classic 1979 Atari videogame is transformed into three dimensions 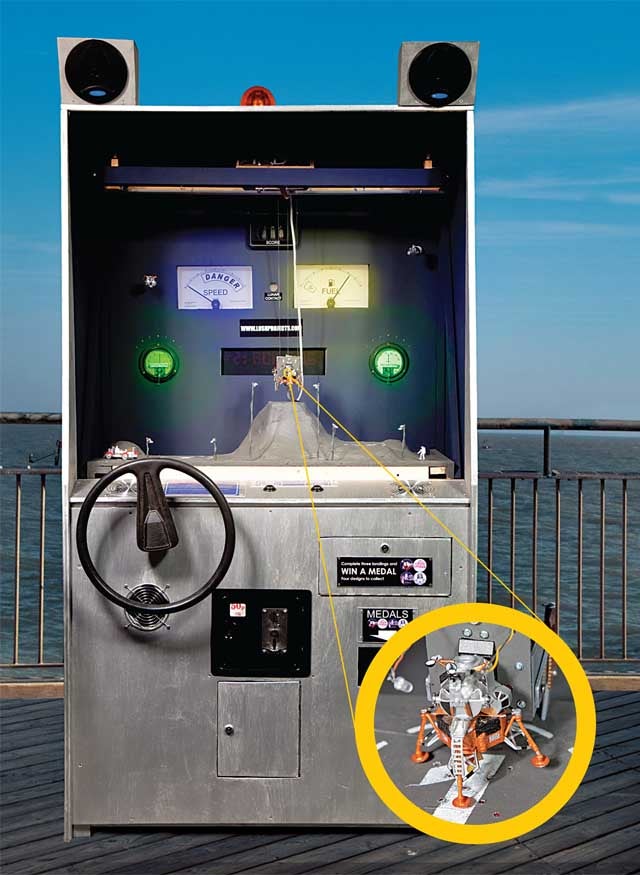 After hearing about preparations for the 40th anniversary of the moon landing at Kennedy Space Center last year, British engineer Iain Sharp decided to develop a tribute of his own. His offering, a remake of the 1979 Atari game Lunar Lander, in which players try to settle a module onto the moon’s surface, is a complex mix of scrapped PCs, fishing line, inkjet printer motors and miniature space vehicles.

To enhance the retro look, Sharp suspended the lander from a moving carriage with the fishing line. As the line unspools and the lander descends, the player turns a modified car steering wheel to rotate the module and then hits a button to fire the “rockets” and push the craft in the direction it’s pointing. The line spools up, and printer motors shift the carriage along a track, carrying the lander across the moonscape.

Sharp tested magnets as a means of measuring successful touchdowns but found that they pulled the lander right to the target, making the game too easy. Instead he installed touch sensors to measure when the craft hit the ground and wrote software that estimates its exact position based on how far the motors moved in the course of the game.

Still, the game, which is installed at the Southwold Pier in Suffolk, England, doesn’t demand perfection from its players. “You can get away with a few little mistakes,” Sharp says, “which is kind of like the real thing.” 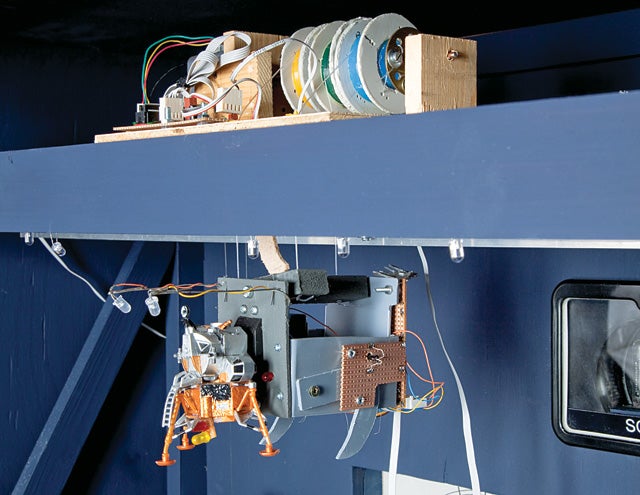 Fishing lines spool down from a wooden frame on the track above the moonscape, controlling the lander’s ascent and descent. 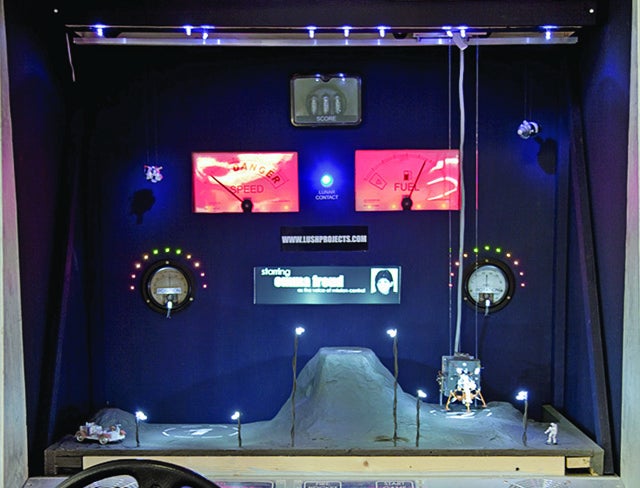 Apollo-style electrical gauges display speed and fuel levels, and turn red if you take too long or drop too fast.

MISSION CONTROL
A science-fiction-sounding mission operator delivers flight directives, such as “Land more slowly!” Sharp provided the narration at first but then recruited British radio personality Emma Freud to do it instead. In exchange, Sharp promised to build her a version of his first “real” arcade game—a mash-up of the classic game Pong and exercise bikes, called Cyclepong.

BRAINS
A pair of old PCs, bought for about $30, translates the input from the controllers—a button that controls thrust and a steering wheel—into the lander’s movements. Sharp wrote the software and, despite its school-science-project appearance, the game is very responsive: The main PC sends instructions to the motors 50 times per second.

GAMEPLAY
The computer measures success by the lander’s descent rate and its final position relative to the targets. Three successful landings earn players one of a variety of vintage-looking pin-on buttons featuring Apollo-themed images. But neglect to fire the rockets in a timely fashion to slow the lander down at a safe pace, and you’ll drop too fast and crash. Crooked landings, measured by how much the servo motor that rotates the lander has moved, are also considered failures. Red LEDs flash and the game’s speakers blare sounds of explosion, letting everyone around you know that you’ve disappointed the nation. 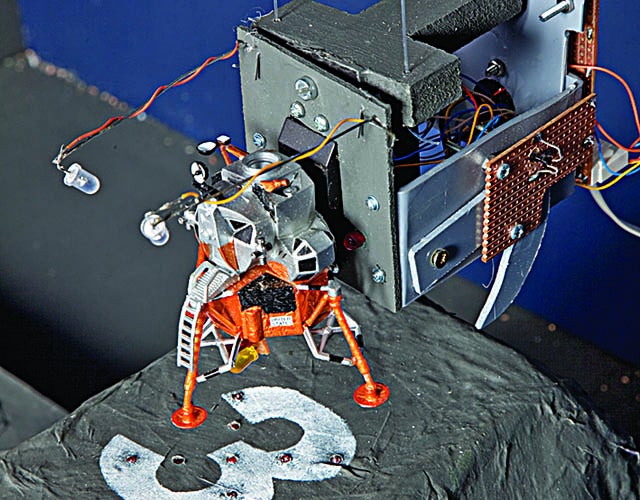 Powered by a cable connected to the carriage above, a servo motor housed in the gray box rotates the lander.