On vacation on Cape Cod, my now-insatiable need for constant connectivity provides a revelation 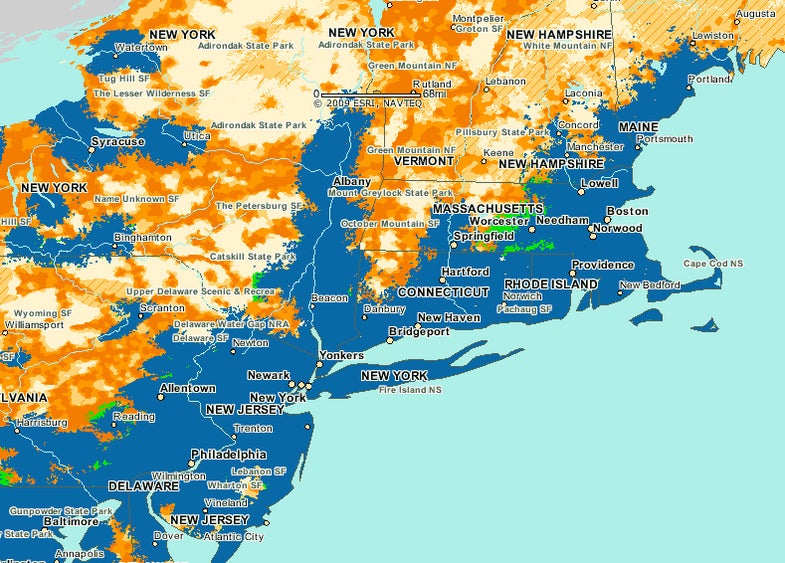 Besides world peace and a visit from the Publishers Clearing House van, the one thing I want in life is an always-on Internet connection—and, I want it affordably. More specifically, I want always accessible, reasonably priced, quick and dependable wireless Internet. After all, my broadband connection through the cable company is technically always on, but it’s worthless once I walk out of the house. It stands to reason, then, that only a mobile provider will ever be capable of fulfilling this wish.

It dawned on me while on vacation recently that I actually already have what I’ve always wanted. The problem is that it’s a last-generation definition of what Internet access is and needs to be.

There I was on Cape Cod, MA, with a bit of work to sew up before I could truly get down to what I was there for: to not work. I’d assumed that my accommodations would supply Wi-Fi and that was my first mistake. After finding the public library closed and the local Starbucks filled to capacity with outlet-hogging loiterers, my only option was to visit a Verizon Wireless store to investigate Big Red’s mobile access offerings.

The abridged version of my two-hour nightmare at the Verizon store is this: I could have very easily purchased a cable to tether my laptop to my LG Voyager without paying an additional access fee. But, my connection would have equated to dial-up, and so I refused to go down that road. No, I’m not a bandwidth diva. The reality is, dial-up is no longer the speed at which the Internet (or business, for that matter) moves. Trying to work on it would have been counter-productive. The alternative was to buy a wireless access USB dongle for $70 and enter a two-year $60/month contract (on top of a plan that already includes data). If I’d owned the new Blackberry Tour, I could have skipped the dongle and tethered for an additional $30/month on top of my plan.

And, there’s the rub. Always-on broadband that follows me wherever I go is mine if I want it—it just happens to be prohibitively expensive. Now, why’s that? For that answer, we needn’t look any further than AT&T, which is finally limping out iPhone MMS this week, two years too late.

By it’s own admission (via the dutiful outreach manager/apologist Seth the Blogger Guy), AT&T’s network has been unable to keep up with the bandwidth demands of its users. Though just about everyone but AT&T saw it coming, the amount of bandwidth consumed by iPhone users is unprecedented. And that’s with features like tethering and, until last week, MMS turned off—not to mention the crippling of high-bandwidth apps like Skype and Sling. If you think AT&T’s network robustness is dismal now, imagine how quickly it would have imploded under the stress of millions of users feely streaming voice and video.

The quagmire AT&T finds itself in is a problem endemic to all mobile providers. If they made it easy for us to use our connections for all that that we want to use them for, they’d crumble. It’s why Verizon wants to charge me so much money to get my laptop online. They don’t really want me to do it, and they certainly don’t want millions doing it. If I want the privilege of desktop-quality Web browsing, I have to pay through the nose for it. The issue isn’t lack of demand, it’s lack of supply which is keeping costs up—prohibitively for many. Which must drive the suits crazy, because the customer base waiting to subscribe to an always-on connection when the price comes down just a bit is a huge one.

Our country’s wireless network providers are playing a losing game of perpetual catch-up. As devices, apps and speeds improve, our desires and demands increase. But don’t mistake 4G for the magic pill. Why? Because today’s networks are built to withstand yesterday’s bandwidth demands. By the time tomorrow’s networks are widely deployed, the way we want to use them will have changed. Tomorrow’s demands will have become today’s. Sure, LTE is going to be sweet when it’s first launched and all of our 3G devices and apps are suddenly on the autobahn. But what happens when 4G bandwidth propagates 4G devices and applications? We’ll be in the same boat as we are today: not enough bandwidth to handle what we want and need to do.

Sadly, the FCC’s newly official stance on net neutrality only exacerbates the situation. The only reason the AT&T network still even has a pulse is because the provider has been allowed to manage bandwidth by blocking iPhone access to the aforementioned high-bandwidth applications. It’s a crappy compromise we have to swallow, but that’s the sad shape today’s wireless networks are in. Forcing an AT&T or Verizon to accommodate the insatiable bandwidth demands of users and abusers alike is unrealistic. Say goodbye to unlimited access. Under net neutrality, bandwidth will be managed with exorbitant per-megabit fees.

For CTIA, the International Association for the Wireless Telecommunications Industry, the magic pill is more spectrum. “If the spectrum is the highway, then LTE and WiMax are brand-new types of cars,” says Chris Guttman-McCabe, CTIA’s Vice President of Regulatory Affairs. “New cars will be faster, they’ll carry more people and they’ll get better gas mileage. But, the highway is crowded. LTE and WiMax are more spectrally efficient, and so they will benefit both consumers and providers—but not enough to offset the need for more spectrum.”

To back his case for more spectrum, McCabe points to some fairly staggering numbers in a recent CTIA report [PDF]. The US currently leads the world in the amount of spectrum made available for commercial wireless use with 409.5 MHz (counting the recent AWS and 700 MHz auctions). The UK has made a little less available with 352.8 MHz. The difference is, our spectrum is split between nearly 200 million more wireless customers than in the UK—so there’s much less to go around. Even more alarming, though, is the fact that the FCC has only set aside another 50 MHz for potential commercial wireless use, while the UK has set aside seven times that amount. Again, for far fewer subscribers. More spectrum means more can be allocated to every user in a cell site, which, depending on the band, can translate to higher speeds, more robustness and better building penetration. If the FCC is going to open a floodgate of bandwidth usage with net neutrality, then we all better hope it also opens up more spectrum.

Of course, the impending spectrum shortage is only half the answer and shouldn’t be a cop out for what our country’s mobile providers can do today. AT&T isn’t using a secret stash of spectrum to finally launch MMS on the iPhone. According to Seth the Blogger Guy, the company has been, “working for months to prepare the radio access controllers in our network to support this launch. That means calibrating base stations all over the country, and frankly that’s a very time-consuming process.” In other words, AT&T is using existing spectrum and existing infrastructure—it’s just using it better (we’ll see). AT&T should have done this two years ago, and that’s the point. Our current mobile networks could be much improved if providers spent less money on PR, advertising and Seth the Blogger Guy videos and invested more in the quality of their product.

As for the shape of things tomorrow, a couple of things need to happen in order to keep the machine running smoothly, if at all. More spectrum is one of them. The other is that AT&T, Verizon, Sprint and T-mo need to stop playing perpetual catch-up with our demand and start making investments today in what their roadmaps tell them is still 20 years away. Forget 4G in 2010. It’s already antiquated.