The 3.5-liter V6 EcoBoost engine is the first to provide the luxurious power and easy maintenance of a V8 with the fuel economy of a V6 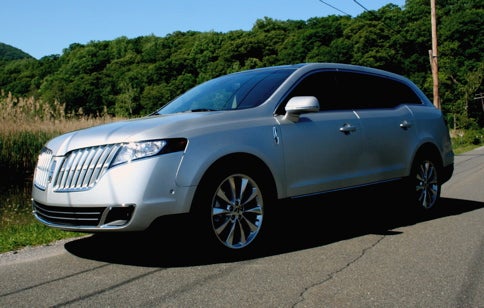 Lincoln's new MKT offers a combination of utility and performance in a luxurious package. Decide for yourself about that grille. Ford Motor Company
SHARE

Imagine the laughter, back in 1965, if Ford had crossed the kid-friendly Country Squire station wagon with the stately Lincoln Continental. A car shopper would have spit-launched his Lucky Strike right into the salesman’s shirt pocket. These days, luxurious motoring and conveying a large brood to Chuck E. Cheese or the World’s Largest Ball of Twine aren’t as mutually exclusive as they once were. Take as exhibit, well probably O at this point, the Lincoln MKT.

The MKT is a premium, seven-seat crossover sharing a chassis with the roomy, right-angled Ford Flex. It’s obvious Ford is in the process of redefining what the Lincoln brand means, visually; the house Henry M. Leland built has endowed the MKT with a largely tasteful mix of tapering and curvature. A sloping, nautical rear section recalling the mid-1990s Lincoln Mark VIII, for good or ill, makes for convenient cargo access by way of a weight-saving magnesium lift gate. As for that grille? I’m not getting involved; it’s your call.

Where the ’65 Continental’s giant-displacement V8 slugged leaded premium like Henry VII dispatched wives and turkey drumsticks, the MKT moves with far greater economy. The MKT gets power from Ford’s new EcoBoost V6, a 3.5-liter fitted with two Honeywell GT15 water-cooled turbochargers. That setup, available on the higher-spec MKT model, produces 355 hp and 350 lb-ft of torque on regular unleaded. It’s an smoothly accelerating and efficient powerplant that bests the fuel economy of many V8-powered competitors with similar horsepower, turning in a city/highway rating of 16/22 mpg. More important for luxury-car buyers, the EcoBoost gives the MKT the lush and quiet takeoff of a premium luxury car, something Lincoln’s badly needed to reconcile in the post-V8 age. For luxury-car buyers, acceleration feel is an important consideration — the equivalent to shelling out for the whir of a Rolex Oyster over the ticking of a Timex.

While not a Hot Rod Lincoln in the true Commander Cody and His Lost Planet Airmen sense, the pre-production MKT I tested does move out with authority, especially with the six-speed Selectshift automatic slap-shotting upshifts quickly and cleanly in manual mode by way of steering-wheel mounted paddle shifters. The base model gets a 270-hp 3.7-liter V6 engine, with front-wheel drive or all-wheel drive. The top-range EcoBoost model is AWD only.

Ford touts a set of rigorous torture tests with which the EcoBoost has proven both durable and easy to maintain. Engineers added a liquid-cooling system to keep the citrus-fruit-sized turbochargers from baking, or “coking” their lubricating oil under extreme heat. Many owners of turbocharged cars are familiar with the routine of letting their cars idle a bit before shutting down, to let the turbines cool. Ford says the EcoBoost needs no such consideration, a relief for those whose hungry kids smell Big Macs and want out asap.

The MKT also gets a full feature set that includes Ford’s Sync voice-activated control for cell phones and MP3 players and 10 gigabyte hard drive for digital music. It also comes with the Flex’s rear-console fridge, which can keep plenty of juice boxes cool, and panoramic power sunroof and rear roof window, which together let in enough sunlight to grow orchids.

Options on the test car included adaptive cruise control with collision avoidance, blind spot warning (a light on the rear-view mirror that lights when a vehicle is lurking outside viewing range) and Ford’s well-sorted Active Park Assist, which the company first showed off on its Lincoln MKS. The system can locate a parking space and do a full parallel maneuver automatically, using ultrasonic sensors and Ford’s new electric power-assisted steering. We didn’t get a chance to test it out, but others who have say it’s better than a similar system from Toyota’s Lexus.

In all, if the production model is as well screwed together as the pre-production MKT, Lincoln could bring along a few buyers who thought established luxury crossovers like the Audi Q7 and Honda MDX were the full-stop answer. Too bad the seats don’t face the rear like in the Country Squire.

All About the Grille

The 2010 Lincoln MKT’s “cow catcher” grille is the subject of both scorn and praise, but no one can say it doesn’t catch the eye.

Up and Coming Luxe

The MKT shares a chassis with the boxy Ford Flex, but its body styling is entirely Lincoln’s. Will Ford’s luxury division emerge as a design leader?

All in the Family

A sloping rear gives the 2010 Lincoln MKT a nautical connection and a visual association with the Lincoln Mark VIII of the 1990s.

Bring on the Curves

The 2010 Lincoln MKT handles well, despite a long wheelbase that means plenty of interior room.

Lincoln’s interior design and fittings are closing in on the quality of German and Japanese rivals’.

Is that a Fridge on Your Console, or…

MKT buyers can choose between a rear bench and second-row buckets and a console-mounted fridge.

Like the Ford Flex, the Lincoln MKT is available with a huge power sunroof and rear roof window for maximum greenhouse effect.

Because One Fridge is Never Enough

Also like the Flex, the MKT can be had with a rear fridge with a five-quart capacity.

The MKT’s curved rear hatch is fabricated from magnesium to save weight.

Power and Economy, Together At Last

The 2010 Lincoln MKT’s twin-turbo, 3.5-liter V6 provides the luxurious power and easy maintenance of a V8 with the fuel economy of a V6.
Cars
ford
lincoln
luxury cars
Test Drive