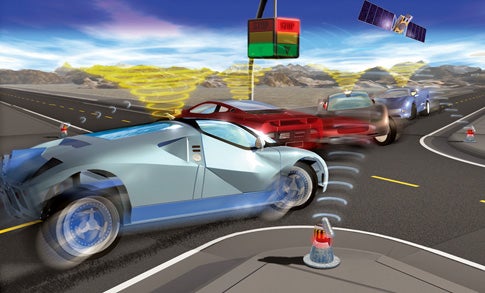 Blinding rain. Careening traffic. Distracted drivers. There are lots of reasons why car crashes are America’s leading cause of accidental death. And one way that most accidents could be prevented: with cars that predict a coming collision-and take action to stop it.

The key to the crash-free future is vehicle-to-vehicle communication, or V2V. Some advances that would make V2V possible are already on the way. Increasingly sophisticated GPS will soon allow you to pinpoint your vehicle´s precise location at any given moment, and stability-control systems that track your car´s speed and direction are even now feeding such information to onboard computers. The primary remaining challenge is finding the means to communicate that data to cars in your projected path.

To encourage the development of V2V, the Federal Communications Commission has cleared the 5.9-gigahertz band for dedicated short-range communications (DSRC) among cars, other cars, and roadside transceivers. Volkswagen´s Electronics Research Laboratory-which helped build the autonomous VW Touareg that won last year´s Darpa Grand Challenge robotic race-recently fitted two Jettas and two Audi A3s with DSRC units and used V2V to successfully run them, platoon-style, through San Francisco. “The technology is doable right now,” says Carsten Bergmann, a VW lab manager. (Of course, getting the right data to the right car at the right time calls for fiendishly complicated threat-detection algorithms that are far easier with four cars than with hundreds of them.)

General Motors has gone one better than VW with a demonstration DSRC-equipped Cadillac CTS that stops itself to avoid accidents. Its enhanced stability-control system predicts where it´s headed-like, into the rear end of another DSRC car stopped in the middle of the road-and prompts the onboard computer to apply the brakes without any input from the driver. The effect is very cool. It´s also a little spooky, and many doubt that live-free-or-die Americans will ever sign off on fully autonomous vehicles.

Luckily, engineer Tomiji Sugimoto and his team at Honda R&D are working on a human-machine interface that will keep drivers in the loop. Head-up displays are a no-brainer. But Honda is also developing what’s called haptic feedback, such as shaking steering wheels and pedals that vibrate. “We’re talking about a system that acts like a backseat driver,” Sugimoto says. Except it’s a backseat driver that’s always right.