Darpa’s New Goal: A Plane That Flies for Five Years

The agency is set to announce contracts for the program soon. 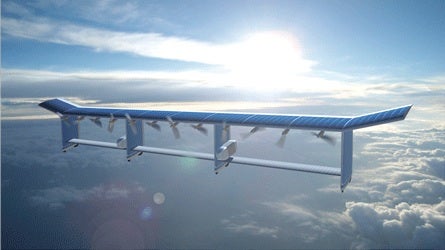 The highest-endurance aircraft currently flying is Northrop Grumman’s Global Hawk UAV, which can stay aloft for up to 40 hours. Now Darpa—which, to its credit, is never short on outlandish ideas—wants to beat that endurance record more than 1,000 times. The goal of Darpa’s recently launched Vulture Program is to build a kind of atmospheric satellite that can stay aloft for five years at a time with little or no maintenance.

It must be able to haul a 1,0000-pound payload all the while, and operate at an altitude of 60,000 to 90,000 feet. How does one power a plane that’s going go fly for five years? Solar seems to be the most logical option, though fuel cells could work, too. It’s not clear what shape the craft could take, though the NASA ultra-endurance concept aircraft pictured here could give some hints. Darpa says it’s close to awarding contracts; then phase one of the three-part program, which will focus on figuring out what this kind of plane might actually look like, can begin. Once someone has built a full-scale demonstrator that can stay in the air for 12 months, a Vulture program aircraft will enter production.