While we wait for our self-driving cars of the future to autonomously deliver us from gridlock forever, Honda is working... 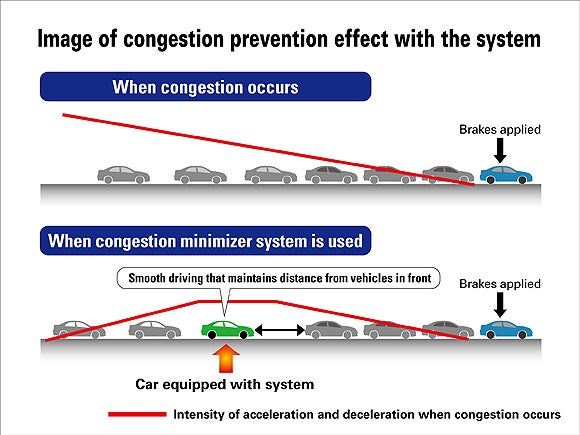 While we wait for our self-driving cars of the future to autonomously deliver us from gridlock forever, Honda is working to help human drivers reduce traffic in realtime by analyzing the driving patterns of individual vehicles and determine if each one is likely to cause a traffic jam. By analyzing the acceleration and deceleration of individual cars, the technology prods the driver to take steps in realtime that will avoid traffic congestion among trailing vehicles.

The system differs from many current in-car technologies that attempt to help drivers avoid traffic by looking at congestion ahead by instead looking at traffic behind–or traffic that will likely form in the wake of a car exhibiting certain acceleration and deceleration behaviors. Based on this, an color-coded onboard terminal encourages the driver to correct his or her behaviors for smoother driving with the goal of alleviating congestion behind him or her.

It’s a kind of pay-it-forward technology–do your best to reduce traffic in your wake, and ostensibly some driver in front of you is doing the same, helping everyone to flow along a bit more smoothly. Early test results showed that the system produces average speed increases of roughly 23 percent while trailing vehicles record an 8 percent fuel efficiency bump by not having to slow and accelerate as often since traffic doesn’t back up. On-road testing is slated for May and July of this year in Japan and Indonesia, respectively.