This team, headed by two brothers, has developed a spinning, 64-laser array that finds the road even in fog and darkness 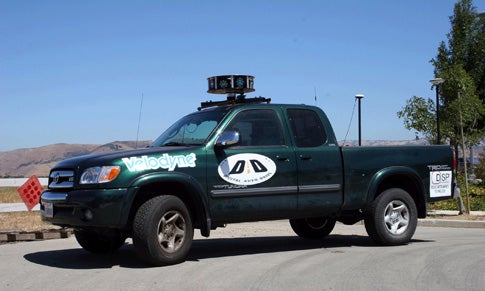 In this, the second of a series, Popular Science profiles one of the favored teams competing to win the Darpa Grand Challenge autonomous-vehicle race, which will take place on Saturday, October 8, near Primm, Nevada. Today we look at Team DAD’s Toyota truck, equipped with an innovative laser-based navigation system. Stay tuned to popsci.com for more previews throughout the week and for minute-by-minute videos and updates on race day.

Rig
A 2003 Toyota Tundra truck with some serious navigational headgear. Its top-mounted â€nervous systemâ€ features nine one-gigahertz digital-signal processors, which generate a constantly changing internal map of surrounding obstacles. The vehicle’s entire roof unit weighs just 300 pounds, which recommends it from a practical standpoint. â€If you’re going to be carrying supplies in the field, you can’t be loaded down with heavy computer equipment,â€ Bruce Hall says.

Backstory
So much for capitalizing on another team’s mistakes-DAD´s 2004 Grand Challenge entry actually bit the dust >because of an opponent's mishap. â€The officials paused us at the six-mile mark so a tow truck could take away the Red Team´s [broken-down] vehicle,â€ Bruce says. â€They stopped us against a big rock, and when we started again, the system couldn't accelerate enough to get over it.â€ The fluke failure only whetted the team's appetite for more action.

Spotlight tech
At the beginning of the year, Dave started working on a completely new navigation system: a spinning array of 64 laser beams that’s unaffected by bright light, fog or darkness (many ordinary camera-based systems, in contrast, tend to succumb to harsh glare or inclement weather). By recording when the beams bounce back off surrounding objects, the array’s sensors can determine how far away the objects are, providing onboard computers with 640,000 navigational data points per second.

Working style
While the team has been frantically revising the code that dictates how the vehicle responds to unfamiliar situations, it can afford to be a little laid-back in other areas. The mechanics of the truck, for instance, haven’t changed much in the past few months. â€Our recent work has been 5 percent hardware, 95 percent software,â€ Bruce says. â€We know the gas, brakes, and steering work. Now we just have to figure out how to handle all the obstacles, all the exceptions.â€

Odds of winning
10:1. With a foolproof vision system and hundreds of miles of road testing under its belt, Team DAD’s entry should stand out as one of the sturdiest vehicles in the race.