With a shift of its wing, the Pentagonâ€™s next attack drone goes from long-range endurance flyer to Mach-speed assassin 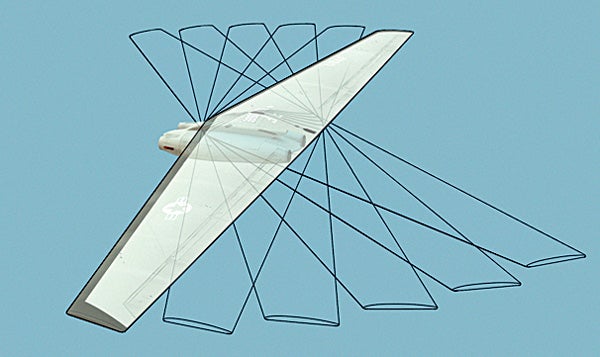 As the plane approaches the sound barrier, its wing pivots into an oblique configuration to maximize aerodynamic efficiency at supersonic speeds.

For years, the U.S. military has wanted a plane that could loiter just outside enemy territory for more than a dozen hours and, on command, hurtle toward a target faster than the speed of sound. And then level it. But aircraft that excel at subsonic flight are inefficient at Mach speeds, and vice versa. The answer is Switchblade, an unmanned, shape-changing plane concept under development by Northrop Grumman.

When completed (target date: 2020), it will cruise with its 200-foot-long wing perpendicular to its engines like a normal airplane. But just before the craft breaks the sound barrier, its single wing will swivel around 60 degrees (hence the name) so that one end points forward and the other back. This oblique configuration redistributes the shock waves that pile up in front of a plane at Mach speeds and cause drag. When the Switchblade returns to subsonic speeds, the wing will rotate back to perpendicular.

Smart plan. Now for the hard part: designing the thing. Darpa, the Pentagon’s way-out research arm, has coughed up $10.3 million to Northrop Grumman to produce a detailed blueprint by November 2007. A flying test vehicle is due about four years later. The initial concept calls for a single wing with engines situated in a pod underneath, along with munitions and surveillance equipment. This setup will enable the wing to pivot while the engines remain pointed in the direction the craft is traveling.

This is not the first attempt at an oblique-wing aircraft. SpaceShipOne creator Burt Rutan designed a switch-wing plane with NASA in 1979. But the slanted wings made the craft hard to fly-when the pilot pulled the nose up, the plane would roll to one side.

The Switchblade, however, is a good candidate to be an unmanned aerial vehicle (UAV). The artificial intelligence used to control UAVs can handle the tricky flight dynamics, and a computer pilot doesn´t need to eat, rest, or go to the bathroom-useful for those 15-plus-hour missions.

If all goes well, Darpa says, a 40-foot-wingspan demonstration model could be ready by 2010, and a full-size Switchblade should be all set for a brawl by 2020.

Objective: To function efficiently as both an endurance aircraft and as a supersonic airplane by changing its shape midflight

Time Frame:Design by 2007;
one-fifth-scale technology demonstration vehicle by 2010; ready for service as early as 2020