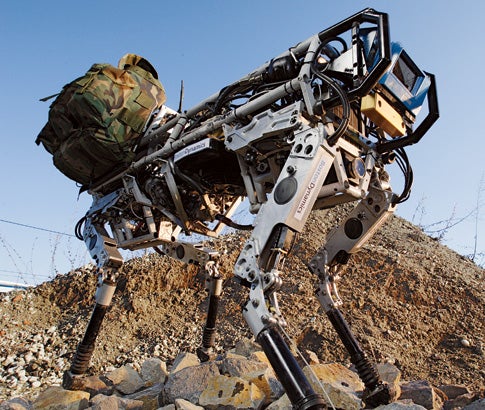 Meet BigDog, a mechanical mutt that does more than snare Frisbees and irrigate fire hydrants. It totes hundreds of pounds of gear so soldiers won’t have to, and it will never spook under fire. Developed by Boston Dynamics with funding from the U.S. military, the BigDog prototype is arguably the world’s most ambitious legged robot.

Its stability and awareness of its own orientation make it the first robot that can handle the unknown challenges of the battlefield. The Great Dane-size ´bot can trot more than three miles an hour, climb inclines of up to 45 degrees, and carry up to 120 pounds-even in rough terrain impenetrable to wheeled or tracked vehicles. But this one is just a puppy; Boston Dynamics expects the next iteration, ready this summer, to be at least twice as fast and carry more than twice as much.

BigDog’s body is a steel frame that houses a one-cylinder gasoline engine driving a hydraulic system, a computer, and an inertial measurement unit (IMU) that uses a fiber-optic laser gyroscope and a suite of accelerometers to track its movement and position. These devices function together with the legs to create BigDog´s precision gait.

Each of the robot´s aluminum legs has three joints that the computer can reposition 500 times a second using hydraulic actuators. The joints are fitted with sensors that measure force and position, and the computer cross-references this data with information from the IMU to determine where the legs have to be to keep the ‘bot upright and moving in the right direction. By regulating the flow of hydraulic fluid to each joint, the computer precisely places each paw.

And the robo-rover has eyes: It sports a stereo camera and laser scanner mounted where the head would go, if it had a head. Although these don’t currently influence navigation, the next BigDog will use them to read the terrain ahead and spot obstacles.

For now, the robot is remote-controlled, but future versions will come unleashed, able to make intelligent decisions about their course without guidance from humans. The more powerful, autonomous BigDog will be ready for battle within the next eight years.