The Science of Stealth

Some of the technology featured in the new sci-fi flick is based on real Air Force research, but most appears out of thin air. Our aviation editor explains 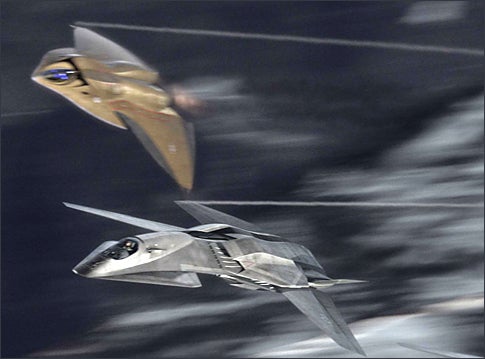 There are three reasons why filmmakers distort science and technology: 1) to make things look cooler, 2) to make a story “work”, and 3) because they have no clue what they’re talking about, and they’ve chosen to ignore the advice (or pleas) of the film’s consultants. Although Stealth–a hypersonically paced Top Gun update about an unmanned air combat vehicle (UCAV) gone amok–gets correct some of the futuristic air-combat technology it depicts, much of it is dead wrong, and the film commits all three of the aforementioned sins.
Set in the near future, Stealth follows three young Navy pilots–played by Josh Lucas, Jessica Biel and Jamie Foxx–who are, evidently, the only pilots capable of handling the Navy’s newest weapon: the ultrafast, ultra-deadly, ultra-sleek Talon fighter jet. The fourth star is Extreme Deep Invader, or EDI, a fully autonomous UCAV. As EDI returns from its first mission, things go downhill fast. It gets blasted by a lightening bolt, which rewires its artificial intelligence, contained in a very cool-looking but highly unlikely glowing sphere inside the cockpit. (Cockpit in an unmanned vehicle? We’ll get to that in a minute.) Now the vehicle suddenly has an alarming propensity to play indie-rock bootlegs illegally pirated from the Internet. Yes, moviegoers, the plane has turned evil–so evil that it illegally downloads music.

I won’t bother with that particular idiocy; there are plenty of other ways to complain about the science and technology depicted in this movie. While its basic premise–a future Air Force equipped abundantly with autonomous aircraft–is absolutely true, the various deviations from valid military air-combat future trajectories are rampant. In no particular order:

Some elements in Stealth are pretty much on target. There is validity to the propulsion system, for example. The captain describes it as a pulse-detonation engine boosted by scramjet turbos. Both these engine types are in active development and will certainly propel aircraft to the kinds of speeds depicted in the film. And there is also substantial truth to the “neural network” used in EDI’s artificial-intelligence system. Designers of autonomous systems are striving to make them replicate human thinking and reasoning processes as much as possible. It is very unlikely, however, that a lightning bolt would turn them “evil”, especially to the tune of Internet piracy. Far more likely, though perhaps lacking dramatic potential, is that a lightning bolt would simply make them crash.