The Navy´s next destroyer is two football fields long, but on radar it looks like a fishing boat

For a closer look, click ‘View Photos’ at left to launch the photo gallery

It will be almost silent, nearly invisible to enemy radar-and capable of dropping six powerful missiles simultaneously on a single target up to 95 miles away. But the most important feature of the DDG1000 Zumwalt, the Navy’s first new destroyer in 30years, could be its versatility. The 600-foot-long ship will be just as comfortable in the deep ocean as in the mine-infested shallows of the Persian Gulf.

Yesterday´s big boats were designed for open-water standoffs, not hostile coastlines. They show up like giant bull´s-eyes on land-based radar installations. And the ships lack sufficient sensor systems to dodge the waterborne mines common to enemy harbors.

That´s not going to cut it for the fleet of the future. Captain Jim Syring, the DDG1000´s program manager, says the need for littoral dominance is obvious if you consider the shallow waters near potential conflict regions: “All you’ve got to do is look at the areas of interest: the Persian Gulf, the Sea of Japan, the Korean Peninsula.”

Whether it’s dropping off a SEAL team or launching missiles inland, the Zumwalt is going to have to slip in unnoticed. It will be quiet-the diesel engine´s noise will be stifled by an inch-thick rubber coating that Syring likens to elephant skin-and stealthy. The spinning dishes and antennas common to today´s ships easily register on enemy radar, so the DDG1000 will instead feature communications hardware that lies flat, embedded in the skin of the deckhouse. This sleek design, combined with a hull that slopes inward from sea level up, rather than outward like most ships, will scatter the energy from an enemy´s radar. According to Syring, on scanners the Zumwalt will look like a fishing boat.

Though hard to find, the DDG1000 will announce its presence with a bang. The Advanced Gun System will be able to fire 600 GPS-guided Long Range Land Attack Projectiles in only 30 minutes-or plant six of them in the same spot at the same time. Staggered around the ship´s perimeter, 80 launchers packed with Tomahawks and other missiles will provide additional power.

For added protection, a new dual-band radar system that searches both the sky and the sea surface will be able to locate something as small as a terrorist speeding in on a Jet Ski, and the ship´s bulbous front protrusion sports a super-sensitive sonar array for identifying underwater minefields. All that´s left now is to start cutting metal. Construction on the first of seven ships is expected to start early next year, with a planned delivery date of 2012. 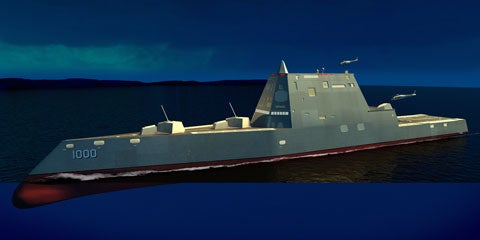 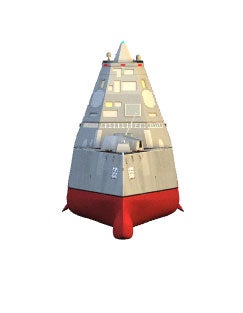 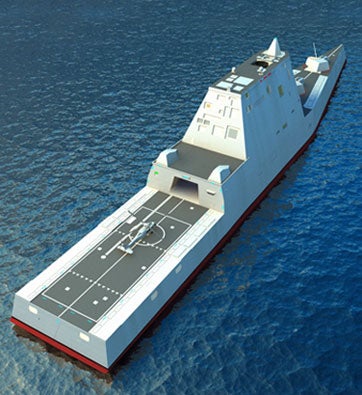 The stern deck of the ship is a landing pad for helicopters, unmanned aerial vehicles and other aircraft. 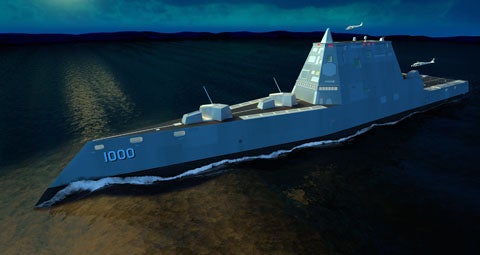 The spinning dishes and antennas common to today´s ships easily register on enemy radar, so the DDG1000 will instead feature communications hardware that lies flat, embedded in the skin of the deckhouse. This sleek design, combined with a hull that slopes inward from sea level up, rather than outward like most ships, will scatter the energy from an enemy´s radar, making the Zumwalt appear as tiny as a fishing boat on radar scanners. 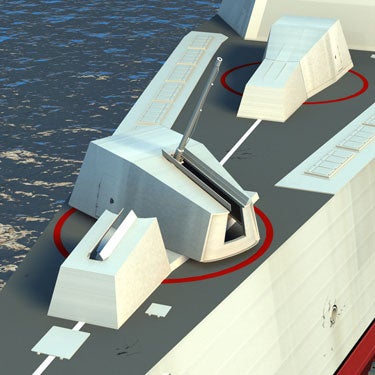 The two massive guns fold down and tuck away for stealth 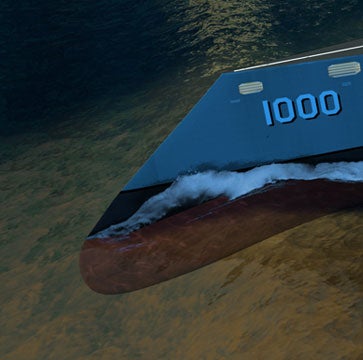 The front part of the bow contains a formidable sonar array for sniffing out mines and enemy subs.