This student team is running its own private competition: It's entering two vehicles, each programmed to act quite differently 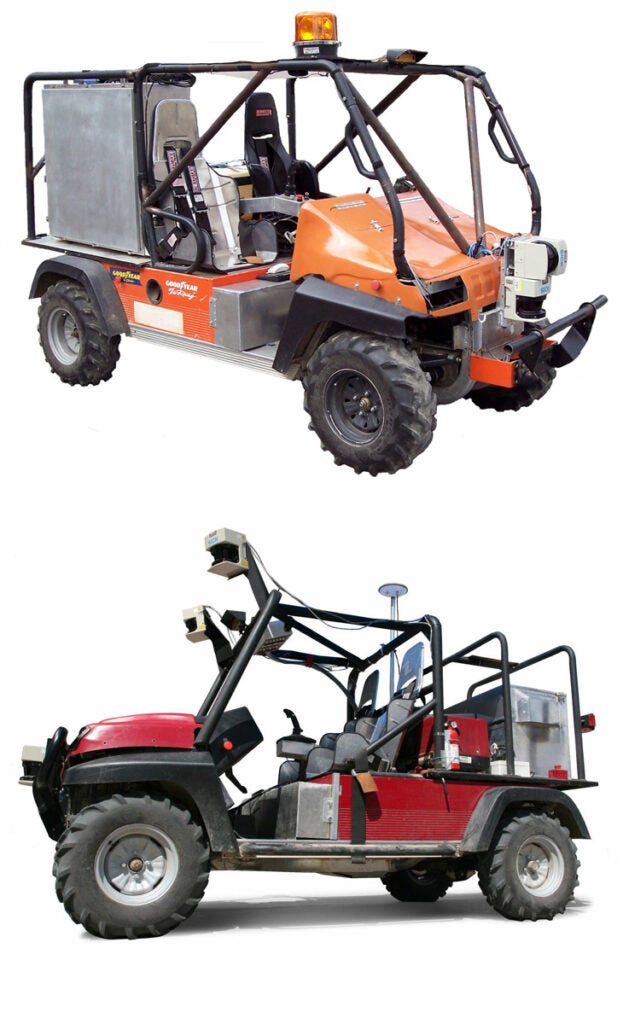 Cliff is like a ‘bot with Alzheimer’s-it immediately forgets what it’s seen, which helps it avoid unnecessary distractions. Rocky has a photographic memory, which enables it to benefit from previous experiences.

In this, the fourth of a series, Popular Science profiles one of the favored teams competing to win the Darpa Grand Challenge autonomous-vehicle race, which will take place on Saturday, October 8, near Primm, Nevada. Today we look at the Virginia Tech team’s two entries, each of which takes a different approach to the problem. Stay tuned to popsci.com for more previews throughout the week and for minute-by-minute videos and updates on race day.

Rig
Virginia Tech is entering this year’s Grand Challenge with a one-two punch: Cliff and Rocky, two four-wheel-drive utility carts. Each has drive-by-wire systems that use motors to control the steering, the throttle, and the electrohydraulic actuators for braking. And each vehicle compresses hardcore features like stereo vision and lidar sensors into a surprisingly lightweight package-both weigh in at about 2,500 pounds. Mechanically similar, Cliff and Rocky differ dramatically in their data-processing styles. More on this below.

Backstory
The team’s 2004 entry made it about 100 yards past the starting line before skidding to a halt as a result of too-enthusiastic braking for obstacles. “There wasn’t anything in our code that said, ‘If you’re trying to go faster, don’t put on your brakes,’ ” Leedy says. “This year we made sure to correct that.”

Spotlight tech
Cliff and Rocky’s software-controlled computer brains interpret the surrounding landscape very differently. Cliff interprets obstacles as it approaches them but keeps no internal record of its past observations. “It can react to what it sees, but then it instantly forgets,” Leedy says. Rocky, in contrast, has a memory like an elephant-every time its laser range finders glimpse a nearby tree or rock, it squirrels that tidbit away into its data bank, to be retrieved later if needed. Although Rocky’s strategy might seem superior, Cliff’s short memory has benefits as well: It enables the ‘bot to ignore superfluous details, such as a deer darting across the landscape.

Working style
Focused and methodical. Whereas the modus operandi of some other teams includes free-for-all brainstorming sessions and impromptu duct-tape fixes, the Virginia Tech team is fairly regimented in its approach to the task at hand. This >is, after all, a class project. "First we defined the problem, then we figured out step-by-step how to solve it," Reinholtz says.

Piggy bank
Sponsors-among them Ingersoll-Rand, Honeywell and National Instruments-donated about $150,000 worth of equipment, so the team didn’t need much of a cash budget. “Most of the time we’d just approach a sponsor and say, ‘Hey, we need this part for our vehicle. Do you have any we can use?’ ” Leedy says.

Odds of winning 20:1.
15:1. In a matchup in which, as Reinholtz observes, “the only acceptable failure rate is zero,” entering two similar vehicles is strategic genius. Whether the golf-cart-like cruisers will withstand the rigors of desert terrain, however, remains to be seen.