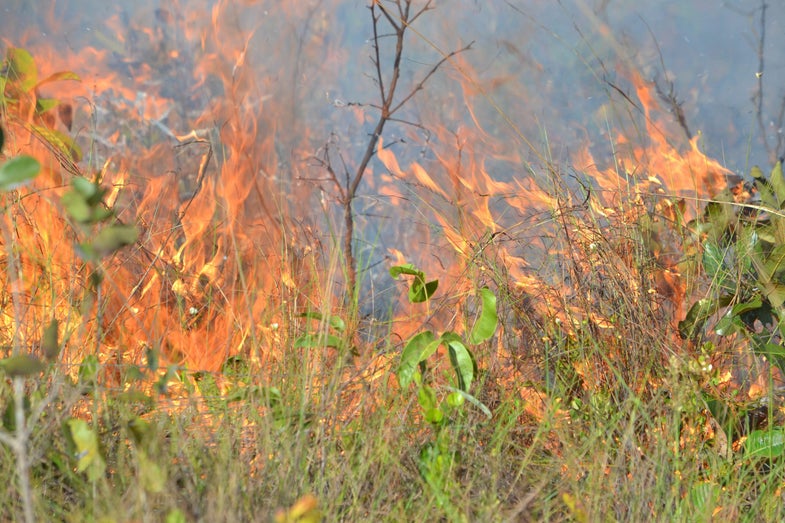 Around the world, fires are failing to spark, and grasslands are suffering. Over the past two decades, the amount of burned land has plummeted globally by nearly 25 percent, an international team of scientists reported today. Satellite images indicate that the rise of commercial agriculture is preventing fires from catching hold, especially in grasslands. This might sound like a good thing, but grasslands and their animal denizens actually depend on wildfires. Burned terrain will likely continue to shrink in coming decades, endangering grasslands and savannas as we know them.

“We should be concerned about losing a very precious ecosystem,” says coauthor Niels Andela, a research scientist at NASA Goddard Space Flight Center in Greenbelt, Maryland, and the University of California, Irvine. “Fires are really critical to these ecosystems and if we take them away from the landscape, we’ll see big changes in the vegetation types and biodiversity.”

Despite its destructive power, fire is a vital part of many habitats. In forests, wildfires clear debris, return nutrients the soil, and toast pinecones so they can release their seeds. And frequent fires are crucial in preventing the savanna, or tropical grasslands, from being overtaken by trees and shrubs. Zebras, rhinoceros, elephants, lions, giraffes and many other animals depend on this open landscape.

To examine how the amount of charred land around the world has changed over time, he and his colleagues poured through satellite data collected from 1998 to 2015. Around the globe, they saw, burned land has diminished, falling by 452,000 square miles over the past 18 years. Even after accounting for varying rainfall patterns, the decline was striking in grasslands and savannas in northern Africa, Central and South America, and the Asian steppe.

Humans have been driving this profound shift. As large-scale agriculture has become more widely adopted, fires have become fewer and smaller. Increases in population density, cropland, livestock, and economic development were all related to the decline in burned terrain, Andela’s team found.

“The disappearance of fire from these lands…is strongly related with agricultural development,” he says. “The relationship between people and their environment changes.” Instead of farming on natural landscapes, people are moving agriculture to private lands. When that happens, people suppress fires to protect their homes and livelihoods. Meanwhile, croplands and construction fragment the landscape so fires cannot spread, while cattle graze vegetation that could otherwise fuel the flames.

Climate change is expected to cause more fires by creating hotter, drier conditions. Overall, though, human actions are likely to have a larger impact on the amount of burned area in the coming years, Andela predicts, especially in savannas. There were, however, a few regions that bucked the trend; the western United States and North American boreal forests saw more wildfires.

There are some benefits to having fewer fires. With less smoke, air quality improves. And without fires to clear them, more trees can grow, capturing a small part of carbon emissions.

“There is a big price to pay for those positive aspects,” Andela says. The magnitude of habitat and biodiversity lost in savannas and grasslands may rival human impacts in the tropics, he and his colleagues wrote today in the journal Science.

“What is very surprising…is just the scale at which it’s occurring,” Andela says. “It is similar to processes of tropical deforestation, yet these changes have been largely ignored by international communities.”

He will continue investigating the consequences of the decline in burned area. Understanding how fires and human actions shape grasslands will help us decide how to preserve them in future, he says.