Scientists Can Tell Your Ethnicity From The Germs In Your Mouth

The type of oral bacteria a person carries is determined more by genetics than lifestyle, one study suggests.

Every human mouth is unique. In each, a diverse microbial community thrives, in the spit, the plaque, and under the gums. The bacterial cocktail is a little different for everyone. It seems that genetics may play a large role in determining what kind of communities you’re carrying around between your teeth, though. A new study from The Ohio State University suggests that different ethnicities have distinct oral bacterial profiles, a finding that could influence the treatment of oral diseases.

Almost 400 different species were thriving in the mouths of 100 people from four different ethnic backgrounds: African American, Caucasian, Latino and Chinese. Only 2 percent of bacterial species identified were present in every individual studied. Another 8 percent of species were shared by 90 percent of the participants. Each ethnic group displayed a distinct pattern of bacteria, especially under the gums. “This suggests that the host genotype influences the microbial community to a greater extent than shared environment,” the study’s authors write.”‘Nature’ appears to win over ‘nurture’ in shaping this community.”

The researchers were able to develop an algorithm that could predict an individual’s ethnicity based on bacteria from under their gums with 62 percent accuracy. The algorithm was able to classify the bacterial communities of African American participants 100 percent of the time, but wasn’t as accurate for other ethnicities. 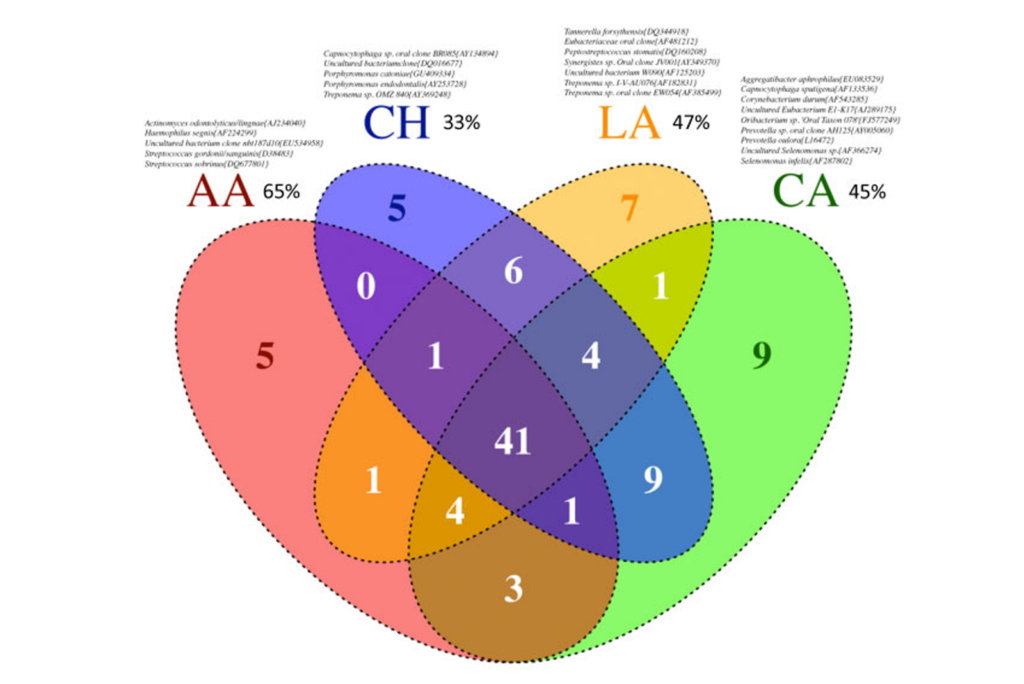 “We know that our food and oral hygiene habits determine what bacteria can survive and thrive in our mouths, which is why your dentist stresses brushing and flossing,” senior author Purnima Kumar, an associate professor in the OSU dental college, said. “Can your genetic makeup play a similar role? The answer seems to be yes, it can.”

If every person has a different bacterial community hanging out in his or her mouth, it could impact how we treat oral diseases. Scientists will need to examine whether certain microbial communities might predispose people to different diseases. It could also alter disease therapies that require rebuilding healthy bacteria in the mouth, since previously, dentists have assumed that healthy bacteria communities were the same for everyone.