What Penguins Can Teach Us About Flu Pandemics

Despite our numerous differences, humans worldwide seem to have a common and interminable curiosity and affection towards penguins. These cute... 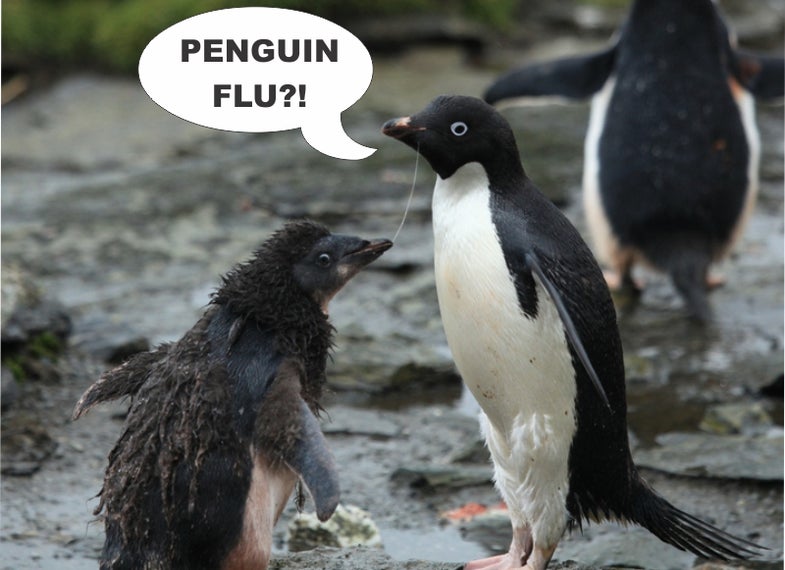 Despite our numerous differences, humans worldwide seem to have a common and interminable curiosity and affection towards penguins. These cute creatures have been a staple in any nature program, have been the focus of award-winning documentaries, and even been the stars of many a commercial from credit cards, to hotel chains. Our attraction to them has been studied and found to lie in their apparent juvenile nature – termed neoteny – and their apparent likeness, at least in social activities – to our own human nature.

The pull of the penguin is so strong that there exists a branch of veterinary medicine devoted to their health. Researchers from around the world have spent their careers attempting to understand the biology of these flightless birds and determine how best to keep them happy and thriving for generations to come. Their gut microbiome has been examined, a full list of diseases has been compiled, and any risk from human infections, co-called [humanoses](http://goose.ycp.edu/~abotyriu/Bio/ 1 Papers/Human-associated bacteria.pdf), has been sought. Thankfully, there have been almost no links between pathogens of humans and penguins save for two – Campylobacter and Salmonella.

But last week, an international group of researchers reported on the discovery of a novel infection in penguins. This finding, however, may suggest that these loveable creatures could be harbingers of another pandemic in the future. The virus was influenza – avian influenza – and for anyone who has read the news over the last decade and a half, this could bring shivers to even the most resolute spine.

Avian influenza has been a pain for public health officials for nearly a century. The 1918 pandemic was caused by an avian variant of the regularly circulating H1N1 virus. In 1997, a never-before seen strain, H5N1 appeared in Hong Kong, infecting 18 people and killing six of them. The virus has since led to outbreaks around different parts of the world, leading to 650 cases and 386 deaths. In addition, a handful of other avian flu strains have made their way into humans including H7N9, H9N2, H10N8, H6N1 and just in the last week, H5N6.

Now, thanks to the penguin research, there is another strain of interest: H11N2. The team took swabs from the trachea or the rectum of Adélie Penguins and then attempted to identify the presence of any influenza strains. Previous research in King Penguins revealed no presence of any influenza so the samples were expected to be negative. Yet, in some 2% of the birds tested, the virus was found. With further genetic testing, the strain was elucidated although this offered more concerns.

The first worry was the dissimilarity of this particular strain to others known to be circulating the globe. Comparisons suggested there were links to strains isolated in other parts of the world, including North American horse flu, but the overall sequence was unique to these penguins. The authors described this phenomenon as an “evolutionary sink” in which a new virus is established due to rare connections with other flu viruses. In the context of penguins, their limited interaction with other avian species suggests they may have come into contact with H11N2 accidentally and spread it amongst the population until it became transmissible.

The second issue dealt with the likelihood this virus could escape the penguin population and enter the human one, through interaction with researchers or more likely, tourists. To ensure calm, the researchers attempted to infect an animal model – ferrets – with the virus to see if any infection arose and whether it was transmissible. The same method was used with the H5N1 virus to identify any possible means by which it could become readily spread between humans. However, the H11N2 strain didn’t cause infection. There virus could not cause an infection and there was no antibody response to it.

To ensure there was no risk to humans, the team conducted one final experiment involving a specific route of influenzavirus infection. The virus was introduced to a cell line known for growing influenza and kept at the usual temperature of the human upper respiratory tract: 33◦C. Again, the virus simply could not cause infection as it was adapted for the penguin body temperature, which can be several degrees higher than humans.

The work of the team confirms penguins pose no threat to humans from this new flu strain. As for what the discovery of H11N2 means to overall public health, the impact of the virus on the avian population based on its lineage and ancestry may offer valuable information. Most importantly, researchers may have the opportunity to discover how a novel strain progresses from killer epidemic to a feared pandemic and eventually, a cautioned endemic variant. If we can learn that from our flightless friends, they would certainly deserve our love.