The Portuguese F-16 Fighting Falcon is just one member of a historic squadron. 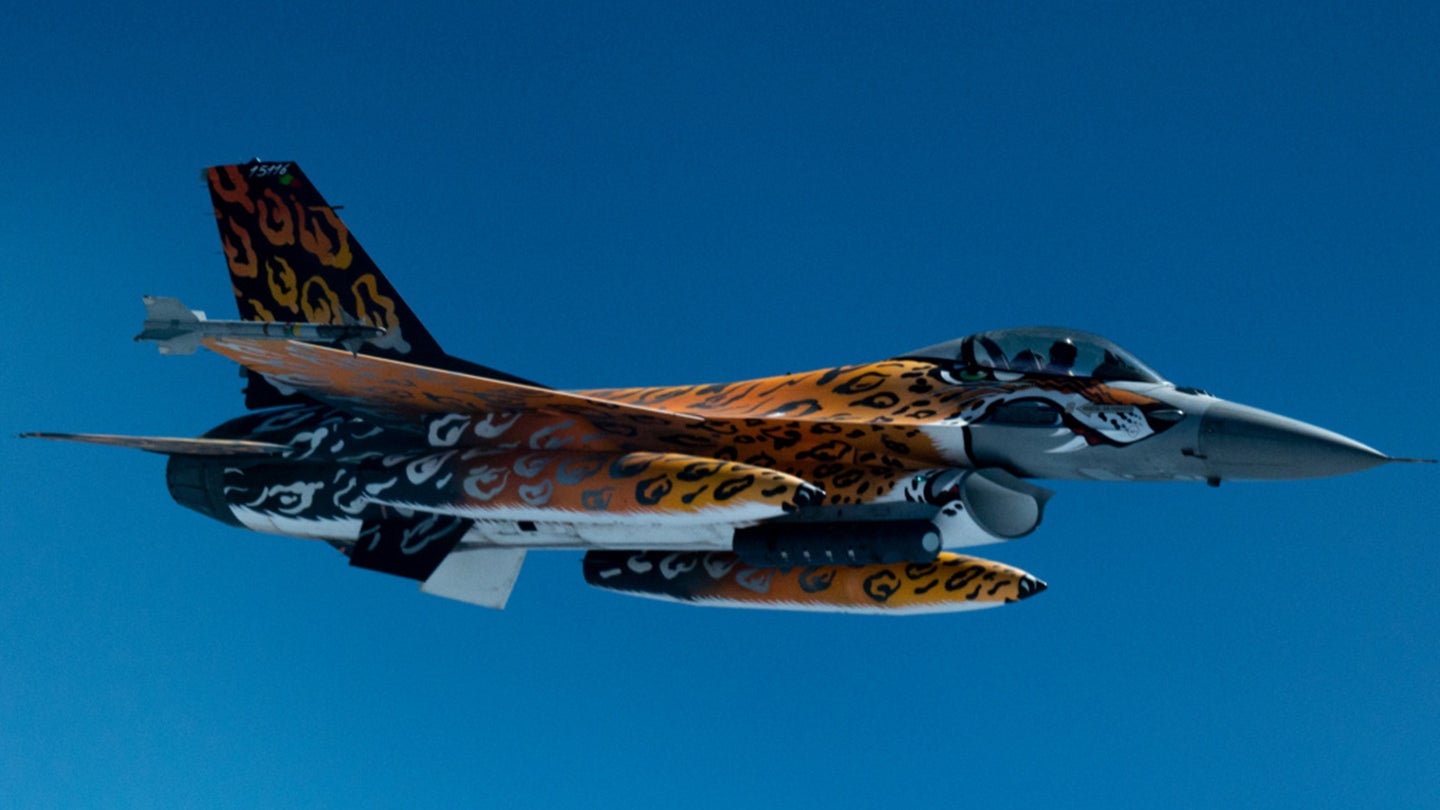 It’s a bird, it’s a plane, it’s a … tiger? Aviation fans may have noticed an image of an F-16 painted in brilliant orange, black and white posted to the U.S. Air Force Facebook page over the weekend. The photo shows a Portuguese Air Force F-16 flying alongside an American B-52H Stratofortress bomber during a mission over Spain on June 2.

We at Task & Purpose love a good fighter jet paint job, and there are plenty more tiger schemes where that one came from. In fact, painting tigers on fighter jets is part of a decades-long tradition among North Atlantic Treaty Organization (NATO) countries dating back to the early 1960s. There’s even a NATO Tiger Association, which is not officially a part of NATO, but exists to promote solidarity and teamwork between NATO fighter squadrons, according to the association website.

The main event for the NATO Tiger Association is the annual Tiger Meet, where aircraft and crews from several of the association’s two dozen or so member squadrons (most of which have Tiger mascots) get together to fly training missions. This year, the event took place over two weeks at Beja Air Base, Portugal from May 2-14. Nine fighter squadrons from eight nations including the U.S., Portugal, Greece, Italy, Netherlands, Poland, Spain, France, and non NATO member Switzerland flew day and night operations practicing air-to-air, air-to-ground and air-to-sea missions according to The Aviationist.

Besides Portugal, other countries that sported tiger paint on their warbirds included an Italian Eurofighter Typhoon, a Swiss F/A-18C Hornet and a Polish F-16C Block 52+.

But why a tiger? It all goes back to the founding members of the NATO Tiger Association. It started with the British Royal Air Force’s since-disbanded No. 74 Squadron. Also known as “Tiger Squadron” due to the aggressive, tiger-like spirit it displayed in World War I, No. 74 in 1960 had just received a few brand-new English Electric Lightning fighter jets, according to the NATO Tiger Association website. Its commanding officer, squadron leader John Howe, wanted to show it off while getting some training time with the U.S. Air Force 79th Tactical Fighter Squadron (also called ‘Tigers’) based at RAF Woodbridge, England. Howe met up with his old buddy, Ed Rackham, who now commanded the 79th, and the two pilots decided to start training with their squadrons together on a regular basis.

The training grew to include a dozen more nations over the years, but the original objective of bringing NATO air forces closer together remains the same, according to the NATO Tiger website. And as a bonus, the paint jobs have become exceptional.

This reporter could not find many recent examples of the U.S. Air Force painting its fighter jets with tiger stripes, but it has happened in the past. For example, in 2001, the Colorado Air National Guard sported tiger stripes on an F-16C during a Tiger Meet of the Americas at Buckley Air Force Base, Colorado, in a Western Hemisphere-version of the European meet.

But enough about history, let’s get back to the pretty airplanes. Below are a few more examples of our European allies’ best tiger paint jobs.