Where you should move to feel young forever, in one chart

How old will you be when you start to feel 65? It depends on where you live. 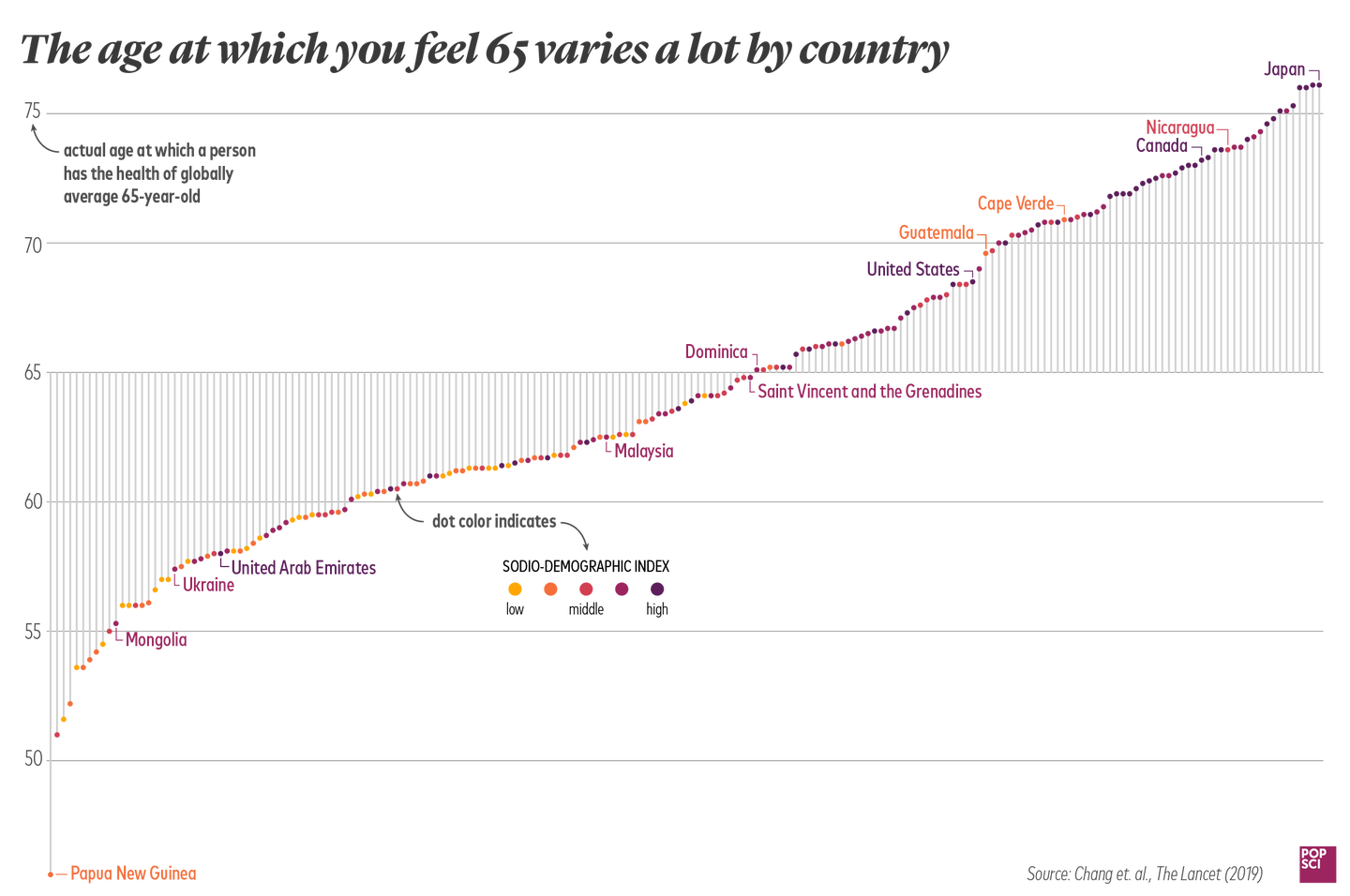 It’s one thing to live longer, and another to live it well. Few of us would want to reach 100 if we already felt like we were ancient by age 60. We want to actually enjoy those years.

Researchers can approximate how much diseases associated with age—like cancer and heart disease—impact our lives by calculating what’s known as disability-adjusted life-years, or DALYs. By looking at the DALYs a country has per 1,000 adults, you can get a sense of how much these diseases are impacting the health of that population.

And if you’re a group of researchers who published a paper in The Lancet last week, you can cleverly take the average global DALY and figure out which countries are doing the best and worst at preserving health into old age. What you get is a metric of how old a person in each country would need to be to feel as if they’re 65.

Here’s how it works: the average number of DALYs globally for 65-year-olds in 2017 was 392.9 per 1,000 adults. By looking at each country’s DALYs by age, you can then figure out which age group matches up with that average. In Japan, for instance, the group with roughly 392 DALYs are actually 76, which means that the average 76-year-old Japanese person feels as old as the average 65-year-old globally.

Japan is, it will probably not surprise you to learn, at the top of the rankings. The lowest, Papua New Guinea, has an equivalent age 30 years below that: theirs is 45.6.

Much of the ranking goes according to socio-demographic index, or SDI, which is kind of like socioeconomic group only more comprehensive. But there are some outliers.

Nicaragua, for instance, has a middling SDI, but one of the higher equivalent ages at 73.6—higher than both the U.S. and Canada. At the other end, Mongolia’s SDI is pretty high yet has an equivalent age of just 55.3.

Unfortunately, as the paper points out, the general trend is that “Despite not living as long, we find that adults in low SDI countries still experience high burden of age-related diseases.” Wealthier countries with older populations, meanwhile, are improving their older adults’ health rapidly. In the last 20-odd years, low SDI countries have relieved their age-related disease burden by 21 percent while those with high SDIs have gone up 31 percent.

The authors note that figuring out which factors enable some populations to delay the effects of aging—especially those less prosperous countries that have done so—could help other nations navigate a path toward less disease burden. And as our global population lives longer and longer, that’s going to be more important than ever.