Beauty standards are literally toxic for women of color

Personal care products can poison you, and women of color take on extra burdens. 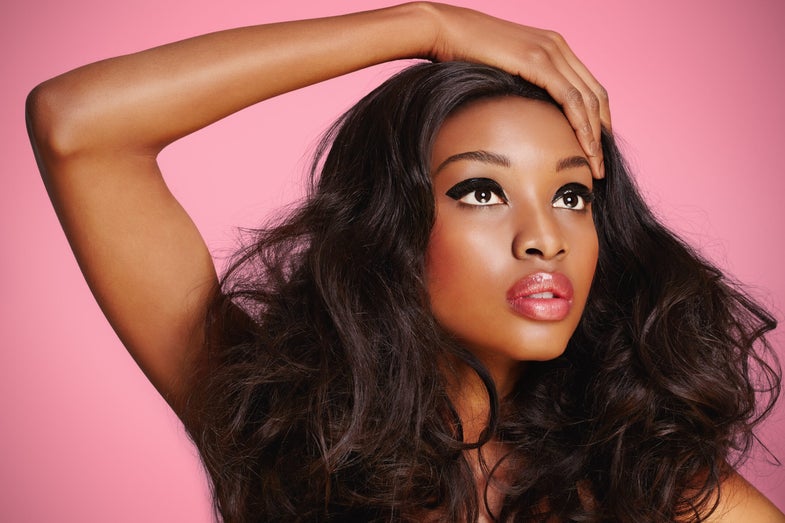 “Dry, lifeless hair can take the fun out of your life,” intones an announcer in a 1950s ad for the haircare product Brylcreem, “but you can put it back with Brylcreem—with Brylcream, a little dab will do you.” The ad might seem a little rough by 2017 sensibilities, but some 60 years later we’re still attracted to the shine promised by cosmetics and personal care products. Toothpaste companies pledge that they’ll give us blindingly white smiles, while deodorant manufacturers dangle the hope of a life without stink. The advertisements that we see and the products we buy help determine and reinforce what we view as normal.

These days, the average man uses five to seven personal care products and cosmetics, while the average woman uses around 9 to 12 (17, if she’s a teenager). While this might seem normal (body wash, shampoo, conditioner, deodorant, and lotion add up quickly), our daily habits expose us to a dizzying number of chemicals. And in recent years, environmental toxicologists have started to suspect—and in some cases, even confirm—that a few may be harmful to human health and wellbeing.

Personal care products include chemicals like parabens, which are thought to interfere with the body’s hormonal processes because they mimic estrogen. They also include phthalates, some of which, studies have shown, interfere with the reproductive processes of lab animals. And then there are all the added fragrances, a particularly opaque category that includes chemicals linked to everything from reproductive dysfunction to cancer.

Studies suggest that the average white American woman exposes herself to 168 personal care chemicals a day, seven days a week. If that sounds like a lot, researchers in a commentary released today in the journal American Journal of Obstetrics and Gynecology suggest that the cumulative toxic burden for American women of color is even higher.

“A lot of people assume that if they’re buying something from the store, that it’s been thoroughly vetted for health and safety concerns,” Ami Zota, lead author on the commentary and an environmental and occupational health researcher at The Milken Institute of Public Health at George Washington University told Popular Science. “However, that’s not really the case with cosmetics.”

As bad as exposure risks are for white Americans, Zota found that exposure for women of color is even worse—likely because of pressures to conform to beauty standards based on more European characteristics.

This wouldn’t necessarily be problematic, from a toxicological perspective, if we were talking about fashion norms (anyone feel like bringing the dirndl back?), but the beauty standards in question—such as lighter skin and straighter, less coiled hair—are much more dangerous to achieve. To do so, women of color must expose themselves to an additional battery of chemicals that white women do not. The end result is that women of color have higher levels of beauty-related environmental chemicals in their body, irrespective of socio-economic status. And it’s not just driven by vanity.

“There is a good amount of data coming out of the social science literature that says that lighter skin and straighter hair actually has real material consequences for women of color,” says co-author Bhavna Shamasunder, an assistant professor of Urban and Environmental Policy at Occidental College in Los Angeles. “They have more upwardly mobile careers, they make more money.”

The pressure for black women in particular to straighten their hair is immense. The “Good Hair Study” conducted earlier this year by the Perception Institute found that black women’s natural hair was rated as “less attractive” and “less professional” than when it was straightened. Earlier this year, a Boston area school received national attention when it suspended black students for wearing their hair in braids—students who had their hair chemically straightened, however, were fine. Similarly, reports of black women being fired for having natural hair are not uncommon.

For many black women, hair grows up and out—not flat and down. Adhering to European hair standards requires many hours with a straightening iron, not to mention the inability to sweat, ever forget an umbrella, or go swimming.

The alternative are chemical relaxers, which include compounds that affect reproductive pathways. In the quest for straight hair, children as young as four years old are exposed to chemical relaxers that studies have shown lead to early puberty, uterine fibroids, and an increased risk of pre-menopausal breast cancer. That’s a huge risk for the sake of straight hair, and it’s not the only one that women of color take on. The most stunning hazard of all is arguably mercury exposure.

Women of child bearing age know that they’re supposed to limit consumption of fatty fish such as tuna because it can contain mercury, which at even modest levels can damage the brains and nervous systems of developing fetuses. At the extreme end, mercury exposure while in uteri can lead a child to be born with cerebral palsy. And yet, one study of a pregnant Mexican American woman found that her blood contained 15 micrograms per liter of mercury, or three times above the level at which doctors are required notify the Centers for Disease Control. When researchers traced the woman’s exposure back to its source, it wasn’t a serious sushi habit she had to blame. Two jars of face cream that a relative had given her from Mexico were behind her troubling mercury exposure. They contained, respectively, 21,000 ppm and 30,000 ppm of mercury. United States Food and Drug Administration (FDA) guidelines limit the amount of mercury in cosmetics to just 1ppm.

Mercury is a common ingredient in skin lightening creams, products designed to lighten one’s skin by several shades. In fact, its use dates back to the 1900s because it does indeed lighten skin. But mercury isn’t just dangerous if you’re pregnant. It can cause speech, hearing, and walking problems. To make matters worse, it’s not easy to tell if a product contains mercury, because many are imported from countries with different regulations.

Even products made domestically aren’t great at disclosing what’s in them, and mercury isn’t the only chemical in skin whitening creams that poses a problem. Hydroquinone, especially in high doses, is linked to skin cancer. And skin lightening products are a common cosmetic purchase for women of color.

“I knew skin lightening products were huge in India and I also knew from my prior work that Mexican American women tend to use them a lot, as well as women from the Caribbean and in the U.S.,” says Zota. “But we found one recent study that had surveyed approximately 20,000 university students over 10 different countries across the world. And in Africa, in Asia, South and East Asia, all of the Americas, they found that 33 percent of college age women reported recently using skin whitening cosmetics. It further underscored the widespread use of these types of cosmetics.”

To get women of color to buy these products, companies use images and language that devalue darker skin and qualify lighter skin. A 2011 study examining the images and packaging on skin bleaching products sold in Harlem, a historically African American neighborhood, found that the packages claimed bleaching would make skin healthy, soft, and glowingly beautiful. That’s pretty ironic, given that many of the products are linked to skin cancer and other diseases. In other words, some companies are profiting off of not only making women of color insecure, but potentially making them sick. Which is why Zota says that her goal in this commentary, “Is to raise more awareness generally about toxic environmental chemicals in beauty products. And how some of the products that are most commonly used by women of color are often some of the most hazardous to our health.”

One other important factor is environmental racism, or the tendency for governments to enable businesses such as dumps, power plants, and chemical plants to seek out communities of color when building facilities. Women of color are far more likely than white women to live in polluted neighborhoods. The chemical burden they take on in pursuit of racist standards of beauty is compounded by the very air they breathe.

Zota hopes that increased recognition of the role that personal care products and cosmetics plays in the health of women of color will finally put the problem on the medical radar, and ideally lead to better policies. “We need a better characterization of all of the products that are being marketed out there,” says Zota. “What do they contain? We don’t even have that information. Companies don’t even have to register their products with the FDA to introduce them to the marketplace.”

In the short term, she hopes that awareness can empower women of color to protect themselves—and to demand better products. Using fewer cosmetics and personal care items is a good place to start, Zota says, and consumers should look out for products containing fewer chemicals of concern. It’s not always easy to figure out which items are actually less benign, especially thanks to recent trends in what you might call “natural washing.” Since “natural” isn’t actually a regulated term, companies can (and do) slap the word onto products that contain harmful substances. The best bet is to check cosmetics databases that list ingredients.

But both Zota and Shamasunder say that beauty standards themselves need to evolve, too. Women of color shouldn’t have to bleach their skin or straighten their hair to fit outmoded standards of beauty and “professionalism.” Death shouldn’t be the consequence of seeking social acceptance.