These four charts show how the opioid epidemic is evolving. 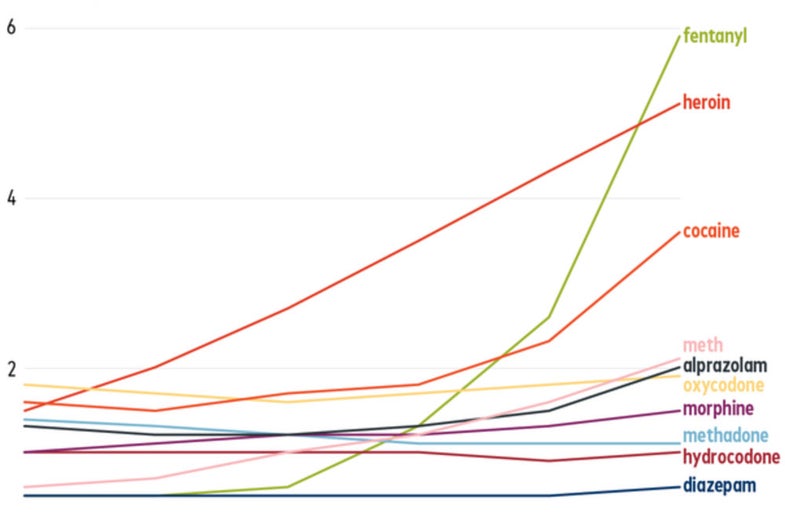 Despite the growing opioid epidemic, we’re still not great at tracking overdose deaths. One of the main ways to track them, the ICD system, doesn’t break down the deaths with enough granularity to detect changes officials need to see in order to combat this crisis. That means organizations like the National Center for Health Statistics at the Centers for Disease Control have to use software that analyzes language on death certificates to figure out more about opioid-related fatalities. A new report based on that data came out this week and included some startling revelations.

Since 2011, overdose deaths have risen by 54 percent, up from 41,340 to 63,632 in 2016. But within those deaths, there are a number of trends emerging that the whole numbers don’t reveal. Here are four charts that illuminate a bit more.

Just five years ago, fentanyl was one of the least common drugs to overdose on. Now it’s surpassed heroin as the number one. Overall overdoses have risen on average nine percent each year in the same time frame, but they haven’t been evenly distributed.

Though we tend to focus on specific drugs, the reality is that most overdoses happen when people are taking more than one substance. Sometimes that’s because drugs like fentanyl are laced into others, like heroin, so users may not even know that they’re taking more than one. Other times it’s the users themselves who are mixing drug cocktails. Either way, the highly potent fentanyl is easy to overdose on in its pure form, and deadly reactions become even more likely as other substances are added to the mix.

Not all states are feeling the impacts of the opioid crisis equally. Much of the Northeast and Mid Atlantic regions are suffering, and though a few Southern states are as well, most of the country is doing better than average—22 lie below the national rate of 21.7 overdose deaths per 100,000 people, while 20 are above. This isn’t surprising: previous reports have shown that substance abuse-related deaths are becoming much more common in some counties even as they become less common in others.

Overdoses are up for people of all ages, but some groups have been particularly hard-hit. Though media reports focus a lot on young addicts, this graph shows that many adults over 45 are also at risk. Nearly as many in the 45 to 54-year-old category died of an overdose in 2016 as did 25- to 34-year-olds.

Thinking about these statistics is unpleasant, but that’s nothing compared to the personal, psychological, and economic toll of an ever-worsening public health epidemic. If we want to help the individuals represented by these dire data trends, the CDC needs to understand exactly who is dying, where, and how.