For many teens, the battle with opioid addiction starts with wisdom teeth

A study suggests dentists are over-prescribing the drugs. 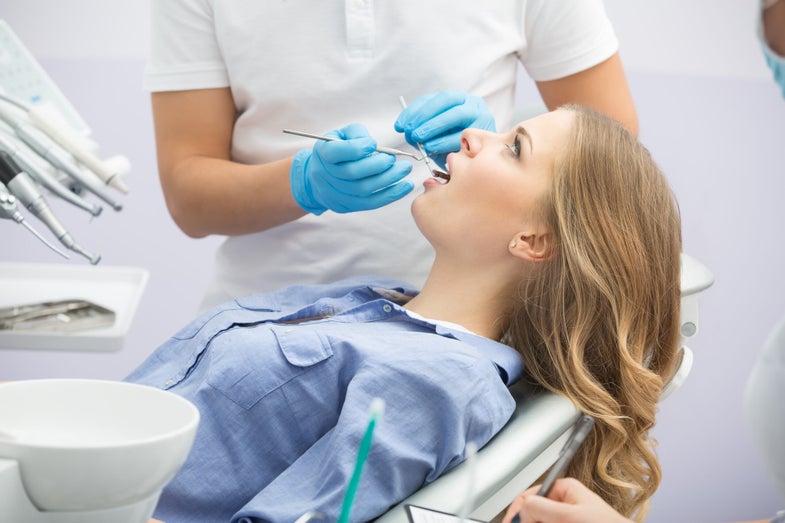 Does a teenager really need a 30-day prescription of Vicodin to cope with dental work?. DepositPhotos
SHARE

Five million people have their wisdom teeth removed each year. Those patients are predominantly young adults and teenagers feeling those third molars crowding their way into the corners of their mouths, causing pain and creating a potential for other periodontal problems. Many of those patients will go under the knife for a bit and leave their dentist’s or oral surgeon’s office afterward with a prescription of painkillers in hand. But that simple prescription might turn out to be more risky than the wisdom teeth themselves.

In a new study published in JAMA on Monday, researchers from Stanford University and the University of California, San Francisco found that among around 15,000 patients aged 16 to 25 who received opioids from their dentists, almost 7 percent went back to a healthcare provider for additional opioids between 3 and 12 months later. Nearly 6 percent were diagnosed with opioid abuse within one year after the initial prescription. In contrast, only 0.4 percent of patients who were not prescribed dental opioids were later diagnosed with opioid abuse.

The research team made these findings using de-identified private health insurance claim records from more than 750,000 individuals (52 percent women, three-quarters white, and an average of 21.8 years old). Almost 100,000 (or 13 percent) were prescribed opioids at least once in 2015, and 30 percent of those prescriptions were written by dentists. About 75 percent of opioid prescriptions were for hydrocodone-acetaminophen, better known by brand names like Lortab, Norco, or Vicodin.

Those numbers are pretty worrisome given that the U.S. is currently battling a crisis of opioid abuse that’s ravaging large swaths of the country. About 70,000 people died from drug overdoses in 2017 alone according to the Centers for Disease Control and Prevention, with opioids responsible for most of those deaths. Many of those casualties are young people—enough to help drive down the average U.S. life expectancy for the second year in a row.

“I’m glad they looked at this,” says Raeford Brown, an anesthesiologist and pediatrician based at the University of Kentucky who was not involved with the study. “We’ve known for some time that there’s a relationship between the exposure to opioids, especially over a long period of time, and people becoming addicted to opioids. One of the places people are exposed to opioids first is when they have their wisdom teeth taken out. Patients will get a 30-day prescription of oxycodone, and if you start taking it for 30 days, the risk that you’ll continue to find and take oxycodone is pretty substantial.”

The reason people write these 30-day prescriptions, says Brown, is that “there’s an imperative in our regulatory system to write one single prescription, rather than write prescriptions over and over again.”

Young people are particularly vulnerable to the effect of painkillers. There are two parts of the brain that interact in addiction: the prefrontal cortex (which relates to decision making), which Brown says doesn’t fully mature until someone reaches their mid-20s; and the reward system located in the midbrain, which is actually very mature even during adolescence. When a teen is exposed to something like an opioid, the drug will deliver a rush of pleasurable chemicals like dopamine. “It feels good, and they don’t have the wherewithal to prevent themselves from doing it again,” says Brown. “Adolescents are what we call ‘primed for addiction.’”

A 6 percent increased risk of opioid abuse may not seem high, but it’s significant when you consider how many people that affects, especially when the risk is avoidable. According to Alan Schroeder, a pediatrician at Stanford University School of Medicine and the lead author the new paper, acetaminophen, ibuprofen, or NSAIDs should be sufficient in managing the pain caused by wisdom teeth extractions. “I think a lot of experts in the medical and dental fields with an understanding of pain management would agree with that.” Even if opioids are required to manage the pain, “we can be more judicious about how much we dispense,” says Schroeder, pointing out that the median number of pills prescribed to patients in the study was 20. In working to spread awareness of this issue, Brown has tried to persuade dentists of patients recovering from wisdom teeth extractions to limit prescriptions to just three to four days worth of painkillers.

The findings also stir renewed questions about whether wisdom teeth extractions are even necessary. “It’s got to be far and away the most common surgical intervention in adolescents and young adults,” says Schroeder. “But we really don’t have great outcome data.” A 2016 Cochrane review found that many routine third molar extractions probably served no benefit to patients when there were no signs of bleeding or gum pain. This issue is too complex for Schroeder and his colleagues to give any sort of concrete recommendations, but the study nevertheless adds more pressure for the dental community to scrutinize the conventional wisdom of, well, wisdom teeth extractions.

We should remember that opioids play an important role in helping patients manage acute and chronic pain alike. But while we wait for researchers to successfully develop non-addictive painkillers or interventions that eliminate the abusive and lethal effects of these drugs, it’s necessary to start implementing better strategies to limit young individuals from exposure for periods stretching several weeks or months.

And as Schroeder and Brown point out, we already have those strategies thought out and available. It’s just a matter of getting physicians and patients to start using them.