This Is Why Virgin Galactic’s SpaceShipTwo Crashed, According To The NTSB 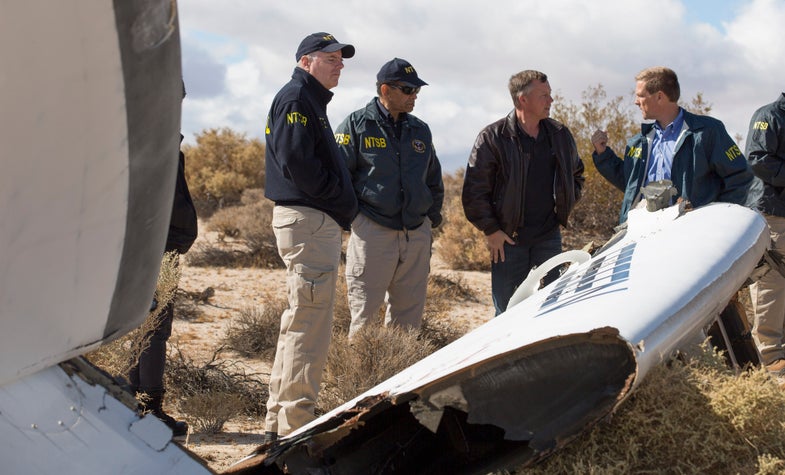 At a public meeting in Washington, D.C., this morning, the National Transportation Safety Board revealed that a combination of human error and inadequate safety measures caused the breakup and crash of Virgin Galactic’s SpaceShipTwo during a test flight last October 31, killing co-pilot Michael Alsbury and seriously injuring pilot Peter Siebold.

The accident was a tragic loss of life and setback in the nascent space-tourism movement, perhaps the worst among a year of many private spacefaring setbacks. The NTSB investigation —which combined interviews, data analysis, and video telemetry from inside the cockpit— confirmed what many suspected: Alsbury prematurely unlocked the SpaceShipTwo’s so-called “feathering mechanism.”

This system, in which the rear tail assembly pivots upward to slow and stabilize the suborbital spacecraft during its descent phase, was meant to be unlocked at Mach 1.4, but Alsbury released it at a lower altitude and speed, Mach 0.92. Because this happened during the full-power climb rather than at apogee—the highest point in the vehicle’s trajectory—intense aerodynamic pressure caused the feather to overwhelm its own motors, fully deploy, and then collapse, resulting in the craft’s breakup. After which, Siebold’s parachute activated. He survived, but with serious injuries.

When the original SpaceShipOne was revealed in 2003, designer Burt Rutan, the now-retired founder of aviation innovator Scaled Composites, described the daring, unconventional re-entry system as a “shuttlecock” configuration meant to create a “carefree” re-entry. 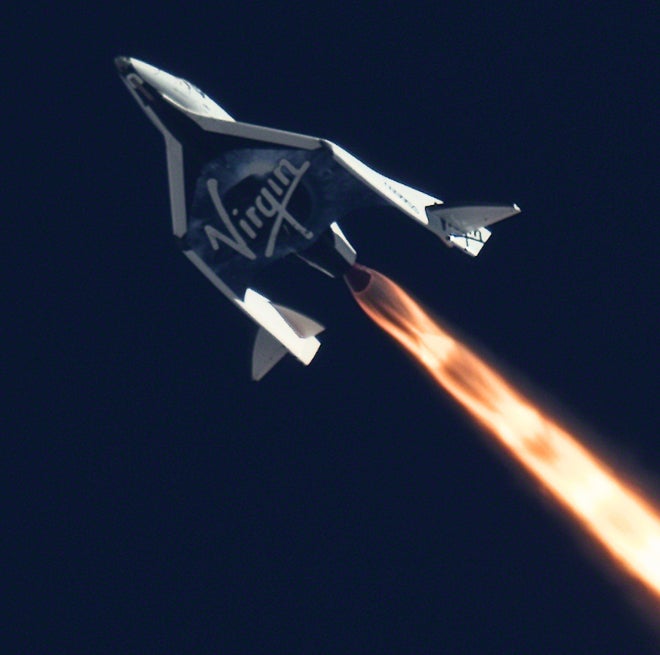 As envisioned, a mothership aircraft, White Knight, carries the spacecraft to approximately 50,000 feet, where it’s released. The crews ignite a rocket motor that propels the ship and its 8 occupants—6 of whom are paying customers who’ve shelled out $250,000 for the thrill ride—at supersonic speeds to an altitude of 68 miles, above the border of space. Once there, they’ll experience several minutes of weightlessness and tremendous views before the ship feathers the tail, re-enters the atmosphere, and glides to a landing back at its original airport.

But describing it as a “carefree” entry is misleading. The spacecraft is a complex system—intended to operate as a rocket, spaceship, and glider—that relies on precision timing and deft control inputs from its crew. Furthermore, as early test flights have revealed, the ride both under rocket power and during re-entry is an intense, borderline violent experience. There are plenty of opportunities for things to go sideways.

In the case of the October 2014 crash, though the actual deployment of the feather required both pilots’ participation (via a pair of levers), it could be unlocked by just one of them. The NTSB speculated that the Alsbury might have done this to avoid an abort later, if he was worried about executing the steps in the 26 seconds they had to do it prior to an abort being called. The investigation also determined that Alsbury had no previous experience with the vehicle’s behavior during powered flight, in particular its vibration and loading. This could have affected his judgment and reactions. In a statement released on YouTube, Virgin Galactic CEO Richard Branson said that his company’s engineers had “already designed a mechanism to prevent the feather from being unlocked at the wrong time,” and added that Virgin Galactic would “continue to prepare and train” its pilots corps. Yet he maintained the NTSB investigation provided the company “a clean bill of health.”

While that may cover the what, the true root causes—the how and why—are the larger and in some ways more important questions, particularly given that commercial space exploration is a new endeavor with many inherent risks. Indeed, the NTSB noted that Virgin Galactic and its partner, Scaled Composites, had inadequate safety mechanisms in place to prevent a single-point failure such as this. The vehicle was not designed with safety mechanisms in place to prevent premature unlocking or movement of the feather, the training system for the crews did not explicitly warn about the risks, and the simulator training did not go far enough to replicate actual flight conditions. For its part, Virgin Galactic has already implemented many changes recommended by the NTSB in its second space vehicle nearing completion now in Mojave, California.

But the NTSB also called into question the nature of the Federal Aviation Administration’s oversight of commercial space travel, suggesting that its role as both a regulator and booster could be problematic.

“The FAA’s oversight role in commercial space is different from its oversight role in aviation,” noted NTSB Chairman Christopher Hart. “For commercial space, the FAA does not certify the vehicle. It only certifies the launch, focusing mainly on public safety. Nonetheless, many of the safety issues arose not from the novelty of a space launch test-flight, but from human factors that were already known elsewhere in transportation. We need to ask whether the FAA’s procedures and oversight were effective, and whether they can be improved upon.”

Investigators noted that the FAA should examine its systems for issuing launch permits, and the process by which it grants waivers from human factors and software hazard analysis requirements. In short, it needs to know far more about the vehicles being flown and what the risks are with each type of flight.

The implication, of course, is that commercial spaceflight might be proceeding too aggressively, and that adequate safety, communication, and regulatory systems are not fully in place. As a result, a simple, preventable error by an otherwise skilled and experienced pilot caused a fatal crash and the destruction of a high-profile, passenger-carrying spacecraft. “These two test pilots took on an uncommon challenge: testing technologies for manned commercial space flight, which is still in its infancy,” Hart said. “Human space flight is subject to unique hazards, and test-pilots work in an environment in which unknown hazards might emerge. We cannot undo what happened, but it is our hope that through this investigation we will find ways to prevent such an accident from happening again.”