FYI: Why Are Escalators So Dangerous?

The escalator was patented in 1892, and the design hasn’t changed much since then. The landing platforms make entry and... 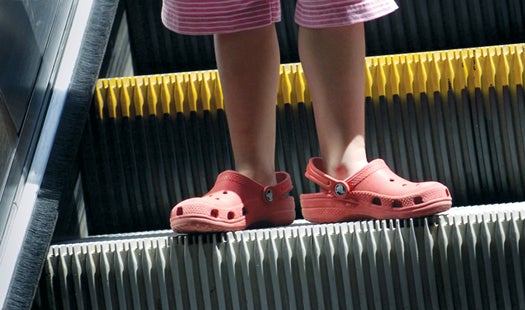 July 20, 2007 Slug: me-escalator assignmet no: 192673 Photographer: Gerald Martineau Smithsonian Metro Stop people wearing "Croc" shoes We photograph people, kids in this instance of photos, wearing Crocs as they travel the Smithsonian Metro stop escalators for story on the dangers of getting this type of shoe caught in the grooves of the steps. (Photo by Gerald Martineau/The Washington Post/Getty Images). The Washington Post
SHARE

The escalator was patented in 1892, and the design hasn’t changed much since then. The landing platforms make entry and exit dicey endeavors—particularly when the moving stairs disappear beneath them, and all manner of clothing and body parts can get stuck. In recent years, escalators have torn the big toe from a Croc-wearing child in Singapore, bucked dozens of riders in Washington, D.C., and strangled a tipsy sushi chef when the hood of his sweatshirt got caught in the gap between the stairs and the landing platform.

One of the worst escalator accidents in modern history occurred in 1987, when a London Underground station escalator exploded, billowing flame into the ticketing hall. Thirty-one people died. The cause was found to be pounds of “fluff”—bits of paper and lint—and grease that had collected in the inner workings and undercarriage of the machine.

There is ‘no incentive for escalator manufacturers to do anything different.’ Since then, deflector brushes, emergency stop buttons and automatic sprinklers have been added to many escalators. In 2002, New Delhi’s Metro system opened with escalators that featured modified landing platforms and trays to collect hair, dust, water and oil and keep them from entering the gears. The platforms also prevented sari-wearing patrons’ clothing from getting caught.

David Chan, the director of the Centre for Information Leadership at City University London, says escalator design hasn’t changed radically because there is “no incentive for escalator manufacturers to do anything different.” What’s in place is safe enough, and, he says, the international standards make systemic change very difficult to implement. Four companies (Otis, Schindler, ThyssenKrupp and Kone) dominate the market.

Last year, Chan and Jack Levy, a mechanical-engineering professor at City University, unveiled a moving staircase called the Levytator that doesn’t double back on itself like a conveyor belt. Instead it loops so that a single installed escalator is actually two moving stairways, up and down. In between the stairways, the Levytator levels out as a moving walkway. There doesn’t have to be a landing platform, so it’s safer. And, Chan says, repairs are far easier, because only a stair or two needs to be removed at a time. Regular escalators must be entirely dismantled.

There’s an alternative, of course: plain old stairs. But nearly 12,000 people die in the U.S. every year after falling down a staircase. Moving up and down, it seems, always has its risks.

This article originally appeared in the June 2011 issue of Popular Science magazine.