How one company’s business jet could usher in a new age of supersonic air travel. 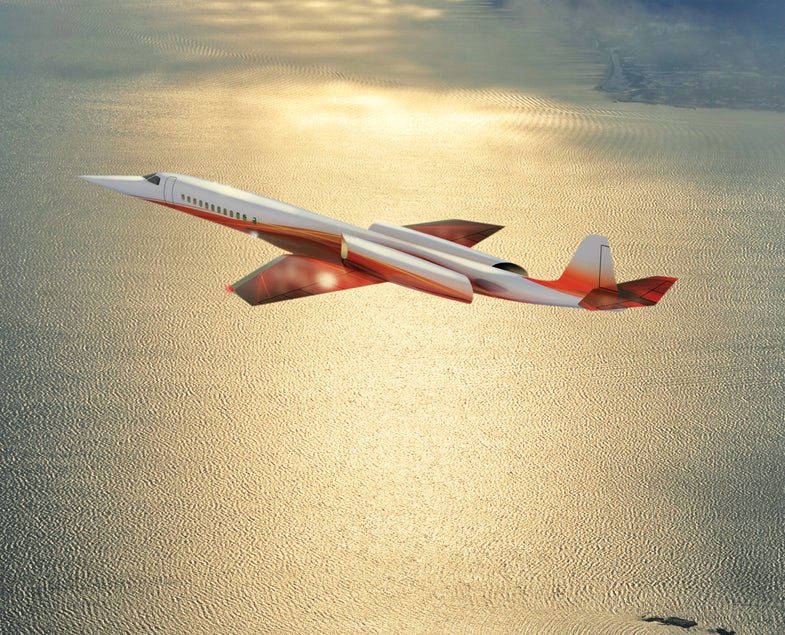 The body of Aerion's supersonic business jet will be made from composite materials and aluminum. Courtesy Aerion
SHARE

On an October afternoon in 2003, a Concorde airliner descended from a cloud-dappled sky and touched down at London’s Heathrow Airport. The plane had taken off from New York’s JFK International Airport just three and a half hours prior, carrying 100 people who’d come to celebrate the end of an era. Since 1976, the supersonic aircraft had flown thousands of passengers around the globe at speeds exceeding Mach 1.0—the speed of sound—but this would be Concorde’s last commercial flight. By sundown, the age of supersonic passenger travel rolled to a complete stop, where it has remained ever since.

Concorde’s retirement is often attributed to a crash that killed 113 people shortly after takeoff from Paris’s Charles de Gaulle Airport in 2000. In reality, the world’s most successful supersonic passenger jet simply wasn’t all that successful. For one, it was restricted from flying at supersonic speeds over the United States and parts of Europe because it produced noisy sonic booms. And its iconic delta wing didn’t produce appreciable lift at lower speeds, so its designers compensated with thrust from four massive, fuel-hungry afterburning turbojet engines.

“Concorde was an exquisite piece of engineering,” says Doug Nichols, the CEO of Aerion, an advanced aeronautics firm based in Reno, Nevada. “But there were trade-offs. You needed this huge aircraft to carry all the fuel required to haul 100 passengers a relatively short distance. It was an economic failure by any commercial business-case standard.”

That lesson wasn’t lost on the aerospace industry. Although Boeing, Dassault, and Gulfstream have pursued supersonic-aircraft projects with engineers quietly working on designs, they haven’t committed to putting a plane in the air. Instead, many companies are waiting until the Federal Aviation Administration (FAA) and other civil aviation authorities across the globe rewrite sonic-boom regulations.

Unlike its competitors, Aerion isn’t waiting for that to happen. It’s actively developing a supersonic business jet (SBJ) for delivery to its first customers by 2021. By building a plane that is both efficient and capable of flying supersonically, Aerion is daring regulators and the marketplace to catch up.

The challenges surrounding supersonic flight can be traced back to basic aerodynamics: how air flows around the plane. Managing that airflow is especially troublesome as a plane approaches the speed of sound. As air rushes over and under an aircraft’s wings, it provides the lift the plane needs to get off the ground. But air also creates drag as friction builds up between it and the plane’s exterior. Drag increases with velocity. The faster the plane travels, the more difficult it is to push the craft through the air and the more fuel the plane’s engines need to fly a given distance. 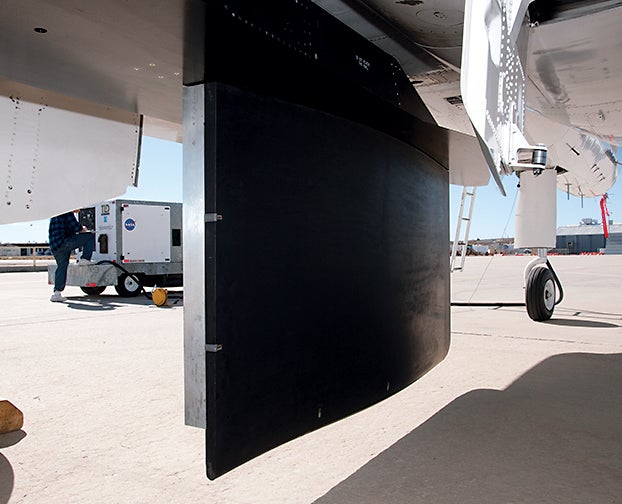 Last spring, Aerion and NASA collaborated to test supersonic NLF airfoil designs at Edwards Air Force Base. They mounted a sensor-coated airfoil to the bottom of an F-15 and flew it at speeds up to Mach 2.0.

As an aircraft surpasses Mach 1.0, a second problem arises: Compounding pressure waves on the plane’s nose and tail produce thunderous explosions of sound—sonic booms. Contrary to popular misconception, sonic booms do not occur solely when an aircraft crosses the sound barrier; a plane generates these pressure waves as long as it’s flying at supersonic speeds. Although an individual hears the boom only once as the aircraft passes overhead, it’s audible to anyone underneath the entire flight path of the jet for up to 25 miles on each side.

Today, various aviation authorities regulate sonic booms from commercial aircraft differently. The International Civil Aviation Organization (ICAO), the U.N. agency responsible for maintaining international aviation standards, currently prohibits aircraft from creating sonic booms that can be detected on the ground but does not technically outlaw supersonic flight. Regulations in the U.S. flatly prohibit flight at speeds exceeding Mach 1.0. (Private spaceflight companies are exempt.) Research by NASA and ICAO may someday lead to a quantitative noise-based standard for supersonic flight—one that defines just how much boom is too much—but that day is still far off.

The Concorde avoided the problem by operating supersonically only in places where sonic-boom regulations don’t apply, typically over an ocean. But supersonic aircraft flying very fast and efficiently on overland routes can also be commercially viable. Further, many engineers have been working to reduce the intensity of sonic booms—an approach that could be viable if the FAA relaxes its rules. With Northrop Grumman and DARPA, NASA ran test flights of a modified fuselage called the Shaped Sonic Boom Demonstrator that dampens the sound of a sonic boom. Gulfstream patented the Quiet Spike—a telescoping spike that extends from an aircraft’s nose during supersonic flight to break up the primary shockwave into smaller ones, which will make the booms quieter.

Aerion follows a different design philosophy: build the most efficient supersonic plane in the world.

Aerion argues that while these low-boom concepts address the noise problem, they don’t solve the fuel efficiency issue, which is just as important to commercial success. “Any shaped-boom airplane is going to experience higher drag than the lowest possible drag solution,” says Aerion’s test manager Jason Matisheck. The company follows a different design philosophy: Don’t worry about the boom; just build the most efficient supersonic plane in the world.

To create an ultra-efficient supersonic craft, Aerion engineers have exploited a type of airflow that in the past was considered too difficult for aircraft designers to work with. Between the atmosphere and fuselage exists a thin region of air known as the boundary layer. When the layer is unperturbed, flowing cleanly and smoothly around the craft, engineers describe it as laminar. On most aircraft, that flow quickly becomes turbulent; this turbulence produces drag. The more natural laminar flow (NLF) that a plane maintains, the more efficiently the plane can fly, especially at high speeds.

In the 1970s, engineers began to examine NLF more closely. Through a series of experiments, engineers such as Aerion chief technology officer Richard Tracy and Bruce J. Holmes, the CEO of NextGen AeroSciences and a NASA veteran, discovered that aeronautical engineers could take advantage of NLF by redesigning aircraft components. Since then, aircraft manufacturers such as Boeing, Dassault, and Airbus have dabbled in NLF, exploring its practical limits as well as integrating it into their concepts and designs. Aerion is the first company to make it a top priority for supersonic flight efficiency. 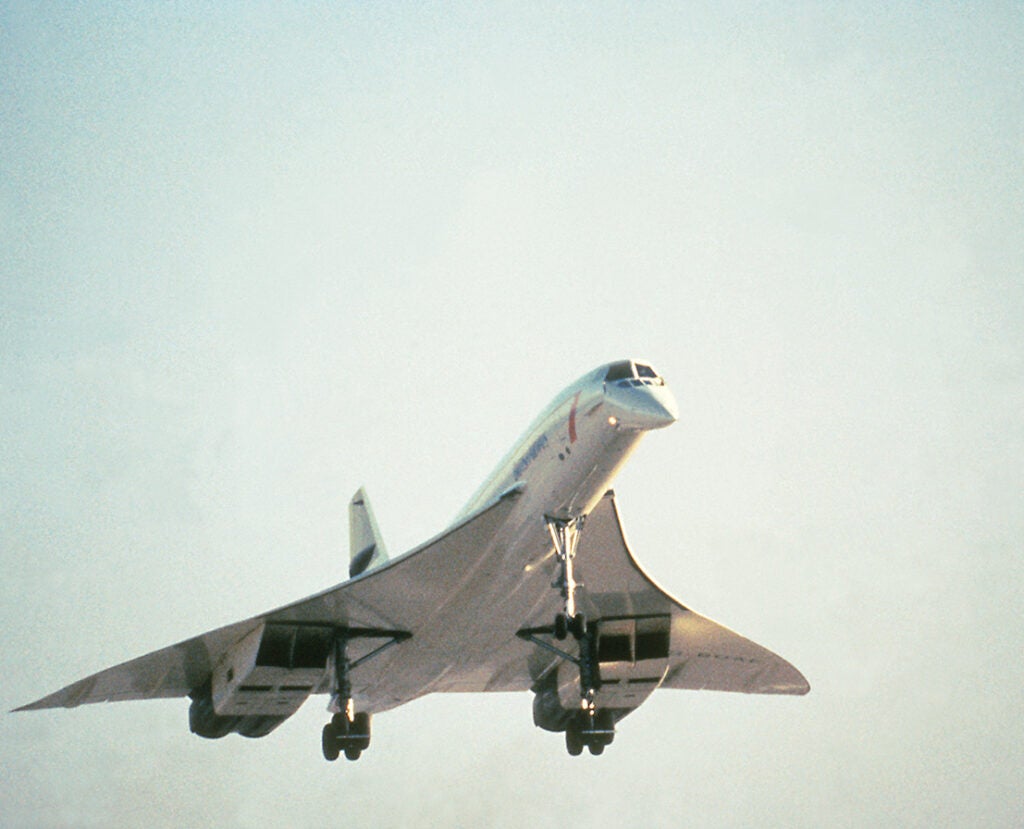 The Concorde supersonic transport debuted as a passenger jet in 1976 and had a maximum speed of 1,350 mph.

By altering the placement of the wings and the shapes of exterior components and engine nacelles, Aerion engineers optimized NLF across almost 60 percent of the SBJ’s airframe. This bought enough efficiency during supersonic flight for what Holmes describes as the most important innovation in Aerion’s design: an unswept wing. Unlike other supersonic aircraft, whose delta-shaped wings sweep back steeply toward the tail, the SBJ’s thin wings protrude nearly perpendicularly from the fuselage. Unswept wings provide better mile-per-gallon fuel efficiency than the wings of the Concorde, which were optimized for supersonic flight but were horribly inefficient at subsonic speeds.

The company’s engineers refined the SBJ’s design in simulations and scale models in wind tunnels. They also attached airfoils to an F-15 and measured its performance in the sky over California. All this testing led to a craft that will be optimally efficient at two different airspeeds—one above Mach 1.0 and one just below it. Over oceans, the SBJ will fly up to roughly 1,056 miles per hour—fast enough to make it from New York to London in just four hours. But because the SBJ will still generate sonic booms, it will fly at Mach 0.98 (647 miles per hour) over the continental U.S., potentially trimming more than an hour off a transcontinental trip. (A typical business jet cruises at around 550 miles per hour.) Up and down the coasts, it could still make use of its supersonic speed by flying over open water.

Aerion engineers expect to deliver the first supersonic jets to customers around 2021—about the time a draft standard by the ICAO could allow some degree of sonic boom over mainland Europe. Already, some 50 customers have signed letters of intent and deposited the $250,000 required to reserve one of the planes. Once Aerion’s SBJ starts flying in U.S. airspace—and perhaps operating supersonically in Europe and elsewhere—the FAA might be persuaded to follow ICAO’s lead and allow supersonic flight domestically as well.

Nichols, Tracy, and the rest of the Aerion team aren’t banking on a change to the FAA regulations. Boom or no boom, Aerion intends to fly.