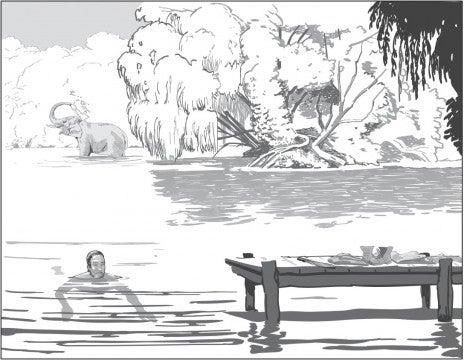 “Felix heard a loud rustle on the shoreline that startled him into alertness. Cougars are known to stalk these shores, and even though he knew the odds that one would bother to jump in after him were miniscule, he couldn’t help but feel a sense of dread as he eyed the distance between himself and the pier, where his machete lay. Then, a trumpet-like noise bellowed from the trees, and the mammoth head of an elephant emerged. Phew, thought Felix. Just an elephant.” Copy, Jenny Siefert. Illustration, John Miller
SHARE

Why is a Wisconsin scientist using science fiction-like stories to talk about global warming?

According to Quest, the public broadcasting science series, the goal of “Yahara 2070″ is to get local communities in the Yahara watershed, a 386 square-mile (1,000 square-kilometer) area surrounding Madison, into constructive discussions about adapting to the effects of climate disruption.

Rather than do it solely via the usual high-level scientific lingo, however, limnologist (fresh water scientist) Steve Carpenter worked with a writer and an illustrator to create four human-scale visions of the region’s future, based on the best current scientific data and trends, as well as interviews and workshops with people living in the watershed.

Each story features characters whose thoughts and experiences frame the conditions projected in the scenario.

The two additional scenarios explore other community and political transformations, such as redrawing local government boundaries to align with local watersheds, the better to manage drought and water scarcity.

This project is fascinating. It’s easy to imagine this approach creating constructive discussions on community resilience all over the United States. Click here to watch and read the whole thing.

Click here for more Popular Science coverage on the future of energy and other resources.