Our Man Goes to Skeleton Camp

Sports: Headfirst at 80 miles per hour on a steel platter. And you thought bobsled and luge were scary. 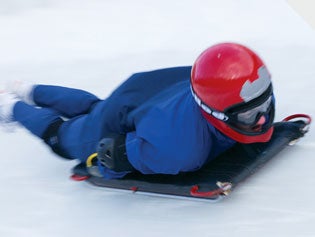 SPEED SCHOOL On the writer’s eighth and final run, he hit 65 mph. Olympians in Salt Lake City will exceed 80 mph.

Thirty-five seconds into my first run, I realize why they call it “skeleton.” G-forces drive my head down, causing my helmet to bounce off the ice as it whizzes by at 45 mph; my bones rattle as I careen around turns I hardly see coming.

I’m hooked from turn one.

This is Skeleton School, just outside of Lake Placid, New York, where I’m learning the basics of a sport returning to the Olympic Games after a 54-year hiatus. On February 20, an estimated 32 athletes from 12 countries will begin competing in what’s been called a speed junkie’s wet dream-headfirst on a steel platform at speeds of 80 mph.

The five-day program-part fantasy camp, part recruitment center-is run by Don Hass, a former North American skeleton champion. Day one is dedicated to learning about the 16-inch-wide, 3-foot-long sled. The instructions are simple: Lie flat on your stomach, keep your toes back and chin up, and steer with subtle shifts of body weight. Less than an hour later, I’m off to the junior start at the bottom half of the course. Slightly anxious-one wrong move would have me cascading off 20-foot embankments-I take a deep breath and plunge headfirst down the track.

The learning curve is short: By the end of the second day, I’m beginning at the Olympic start, with its extra half-mile of relentless turns, which makes 20 in all. During my last run, I peak at 65 mph, but throw all attempts at steering out the window-the G-forces are just too great.

Of course, surrendering control of the sled to the whims of the track isn’t all bad. As Hass likes to say, only half-joking: “He who steers least wins.”

Want to Try It?