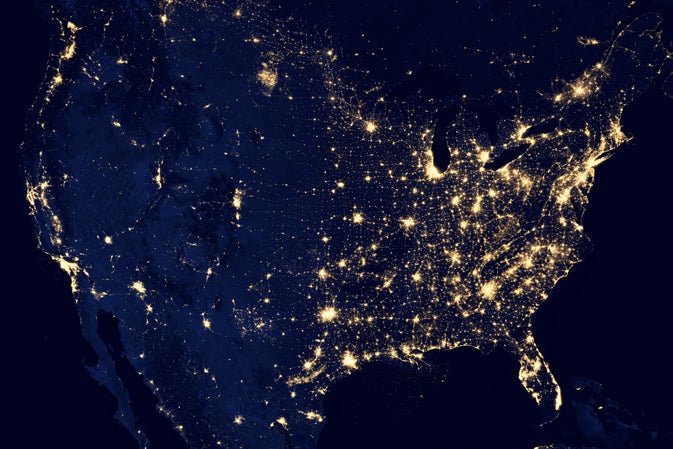 Aliens looking at our planet from a close distance could detect Earth’s life in lots of ways, from the methane in our atmosphere to the reflectance of all the green plants. But only if they saw it at night would they understand that some life here is intelligent.

This image and the video down below are the highest-resolution, best-detailed pictures of Earth at night ever taken to date. The Suomi NPP satellite, designed to study weather phenomena, can look at the dark Earth like never before. It is not nearly as dark as you might think.

Highways across the American Midwest flicker in and out at tiny towns and rest stops, like a map of connect-the-dots. Along a line north from Houston, half the country is plunged in darkness, except for the great western oases of Denver and Salt Lake City. And then there is Europe, awash in light. And the Middle East, with boats illuminating the length of the Nile River and oil-field fires burning in Saudi Arabia. It’s amazing, and NASA stitched it all together in this video.

It’s also fun to zoom in so you can pan around. A Dublin-based photographer and developer built a lovely way for you to do that, which you can see here.

NASA stitched together Suomi NPP data from 312 separate orbits taken from April to October of this year. You can read more about the satellite and its methods over at NASA.