To treat HIV, cancer, and maybe everything else 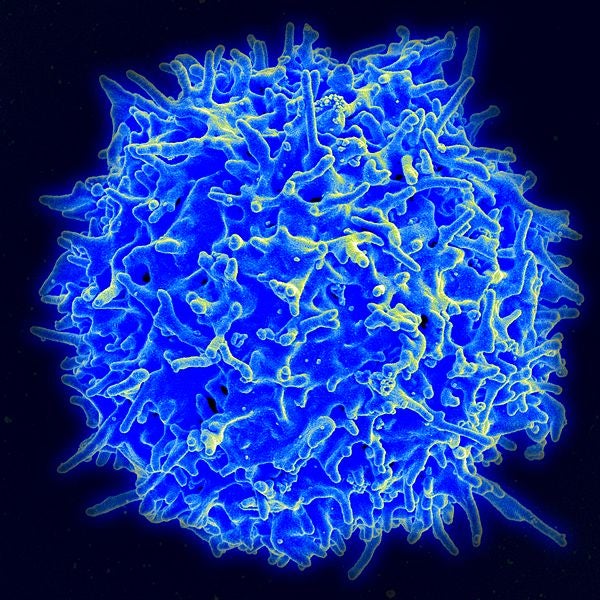 For the first time, researchers have modified the genes in T cells using CRISPR—a special enzyme that can edit DNA. They hope that by altering T-cells, which are critical to the immune system, these cells could fight diseases that usually sneak past or alter the immune system.

Tweaking T cells seems like a great way to fight disease. T cells are the body’s primary disease-fighting agents–they seeking out and destroy cells that may cause infection or disease. They’re also easy to extract from a patient’s blood, alter, and put back in the body. For years scientists have hoped that they could use CRISPR/Cas9, the enzyme that allows researchers to edit DNA at a desired location, to change T cells’ genetic code in order to target specific diseases like HIV or cancer.

But the work proved to be surprisingly difficult—the techniques used to modify the genes in so many other types of cells were inefficient and unpredictable in T cells. After a year and a half of tinkering with the conditions, researchers from the University of California, San Francisco were able to use CRISPR/Cas9 successfully, according to the study published yesterday in PNAS.

The researchers used the enzyme to alter the cells’ DNA so that it no longer produces two proteins. The first, CXCR4, is one that the HIV virus exploits when it invades and destroys a T cell, so disabling it might make the T-cells more immune to attacks by the virus. They also blocked a second protein, PD-1, which other studies found that blocking PD-1 coaxed T cells to attack cancer cells. In the experiments, the researchers were able to block these proteins in about one third of edited cells—not ideal efficiency, but a huge improvement on similar efforts in the past.

Using CRISPR on T cells wouldn’t bring the same controversy as if the enzyme is applied to human embryos because the T cells have to be altered for each individual patient, and they wouldn’t reproduce in the body. The researchers have not yet figured out how to add protein production to the genetic code. But if they can do so, altered T cells may become an accessible therapy for a huge range of diseases.