The Universe May Contain 10 Times More Galaxies Than We Thought

Where have they been hiding? 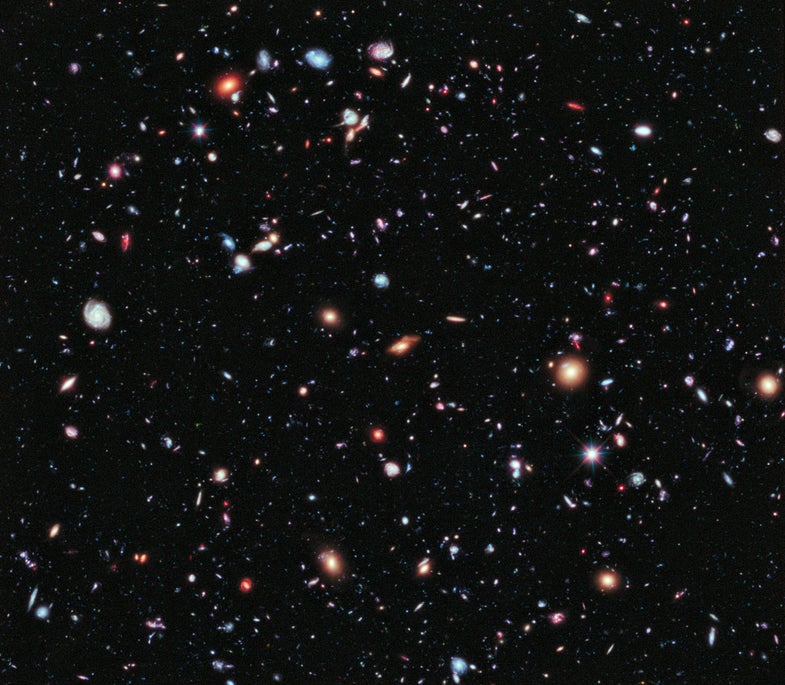 The universe just got a lot bigger. Thanks to some new data from Hubble, scientists have calculated that there must be at least 2 trillion galaxies in the universe–a massive population spike from the previous estimates of a measly 100-200 billion galaxies. We haven’t yet set eyes on the vast majority of these, because they are small, faint, and very far away.

“It boggles the mind that over 90 percent of the galaxies in the universe have yet to be studied,” Christopher Conselice, a co-author on the study, said in a statement.

In an interview with Popular Science, Conselice explained how the team made this astonishing calculation. Last year, the group came up with a formula for explaining how galaxies are distributed by size. Monstrously huge galaxies are very rare, while there are a vast number of very small galaxies. Medium-sized galaxies are medium common.

Analyzing the number of faint galaxies that can be seen with the Hubble space telescope, Conselice’s team determined that there must be an astronomical number of galaxies that we can’t currently see. The team estimates that are at least 10 times more galaxies than previously estimated.

Back when the universe was a strapping young 1-billion-year-old, these galaxies were probably crammed together at a density 10 times higher than we see today. Over time they spread out, and many may have gotten eaten by larger galaxies.

When the James Webb Space Telescope launches in 2018, it may be able to spot a large portion of these previously undiscovered galaxies. Studying them could help explain how galaxies form and evolve.

“They’re the most common galaxies, and so when we start looking at them in the early universe, we’ll get some idea of how typical galaxies form, as opposed to the big, bright galaxies we can see now with Hubble, which are sort of the monsters, rarities, that may have unusual formation paths.”