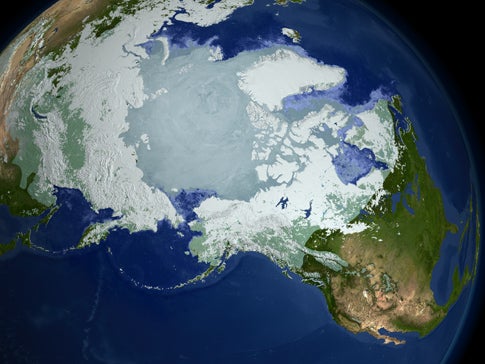 Brutal winter conditions may be may be keeping scientists from gathering the best data on the flow and impact of carbon emissions in the Arctic.

A new study out from NASA’s Jet Propulsion Laboratory shows that 90 percent of the satellite and airborne data collected on carbon dioxide emissions in the Arctic actually come from other parts of the globe.

That means scientists aren’t getting a good read on how much carbon plants and soil are producing and consuming in the Arctic. These factors play a big role, especially in the summer when many plants are taking in carbon dioxide from the atmosphere, and melting permafrost is releasing carbon dioxide into the atmosphere.

Permafrost locks up large amounts of carbon dioxide and other greenhouse gases. As the temperatures warm, more permafrost melts and more emissions are released. This creates a positive feedback loop, where more melting causes more emissions which, in turn, cause more melting — a dangerous cycle.

Scientists are able to get more and better data in the summer months, when it is easier to access remote locations. The dearth of data is in the winter, when weather conditions become harder to deal with, and more data has to be taken remotely, like from satellites. This data isn’t as accurate as data taken on the spot.

The researchers say that it is increasingly important to collect more low-level atmospheric data, to closely monitor the growing amount of melting permafrost. As climate change progresses, more and more ground is either frozen for shorter periods of time or no longer permanently frozen.

“We know [the Arctic] has the potential to change through warming and permafrost thaw, and those changes would have global impacts,” said lead researcher Nicholas Parazoo said in a statement. “We want to have the scientific capability to measure and interpret those changes when and if they happen. Our results suggest we can use aircraft data to detect those changes in as little as 30 years.”