The explorer’s maps from 1778 show some big changes 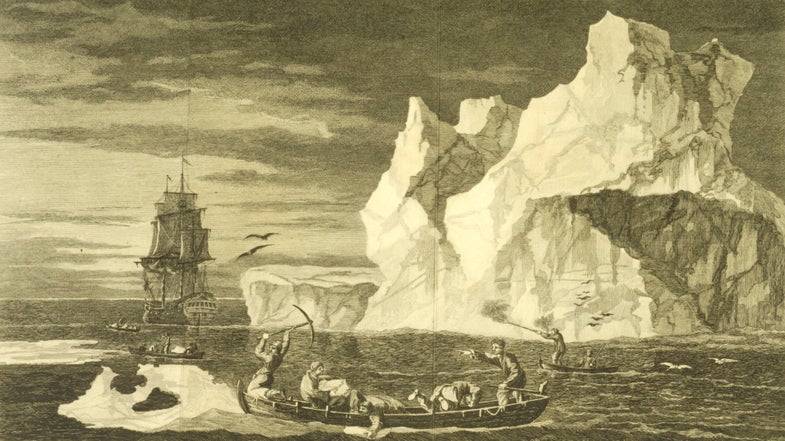 When Captain James Cook entered the Bering Strait in 1778, he did it with pride in his king and country, as evidenced by the Union Jack flying high over the HMS Resolution. The legendary explorer was on a special mission to find the Northwest Passage, which George III hoped would allow ships to pass through the pole. The passage would allow European and Asian traders to connect without going all the way around the horn of Africa.

Guided through the fog by a chorus of barking walruses, Cook ultimately encountered a wall of ice so thick he had to abandon the expedition. He was killed in Hawaii the next summer without ever finding the passage.

But Cook left behind what has turned out to be a precious legacy: detailed records of the historical extent of the Bering Strait and, most critically, the ice in the Chukchi Sea between Alaska and Russia. Now mathematician Harry Stern of the University of Washington’s Polar Science Center has used Cook’s records – and those left behind by other early Arctic explorers – to create a detailed history of ice cover in the region extending all the way back to 1778. Stern’s analysis, published this week in the journal Polar Geography, extends the work of other researchers who had previously tracked first-hand accounts of the annual ice coverage in the region back to 1850.

Stern studied reproductions of Cook’s maps from that 1778 voyage and compared them with those charted by other explorers, along with recent satellite imagery, to determine the historic extent of sea ice in the Chukchi Sea.

“It’s thrilling to see a good reproduction of the original chart. You can see the handwritten detail that went into them and imagine someone plotting these on the piece of paper and going, ‘Ohhh, now I see,’ ” Stern says.

His work is about much more than historical curiosity, though. It has also helped confirm an alarming trend in sea ice. Poring over dozens of maps and the satellite record, Stern identified wide natural variations in the extent of the Chukchi Sea ice in August. For more than 200 years, he determined, the ice almost always reached the southern line where Cook found it in 1778.

But starting in the 1990s, that dependable pattern melting and reforming ice stopped. Ice retreats that scientists might have dismissed as random variation started happening so regularly that no one could ignore the trend. Since then, sea ice has consistently melted earlier, and returned later in the year, than it ever has in recorded history – the history that Stern has now extended back by nearly a century.

The Arctic is less foreboding than it was in Captain Cook’s day: When the ice does return in the fall, it doesn’t cover the same area it used to. So where Captain Cook was stymied by an ice wall, today’s voyagers find open, if dangerous, waters during the late summer. Aided by satellite imagery and reinforced hulls, a few large commercial ships now make the northern journey from Pacific to Atlantic (or vice versa) each summer. “The Northwest Passage does open up every year nowadays, for the last 10 years,” Stern says, creating financial and political opportunities King George III could have only dreamed of.

The opening of the passage has set off a scramble among the Arctic nations, all of whom want to cash in. Canada and Russia claim parts of the water for themselves, while the United States insists the passage is in international waters and therefore navigable by Americans and their allies.

The scramble is motivated in part by the prospect of rich oil strikes. Oil companies are snapping up leases to explore for oil in United States waters, including parts of Chukchi Sea. There’s rich irony in this, Stern says: “The only reason we can drill in the Arctic is because of the ice we’ve lost from burning oil.” Some estimates indicate that as much as 27 billion barrels of oil may lie beneath the ice, inaccessible for centuries but now potentially recoverable – though perhaps at great environmental risk because of the frequently rough weather. In 2012, for example, a 28,000-ton drilling barge ran aground during a fierce storm in the Gulf of Alaska and had to be scrapped.

One thing that’s different now, compared to Cook’s day, is that some people are running the Northwest Passage not for money or glory, but for leisure. The first 1,000-passenger cruise ship sailed through the passage last summer, taking vacationers on a jaunt that was a far cry from the dangerous expedition Cook navigated in the 18th century. “I can only imagine how Cook might respond to the idea that passengers would pay for a pleasure trip through the passage,” Stern says.